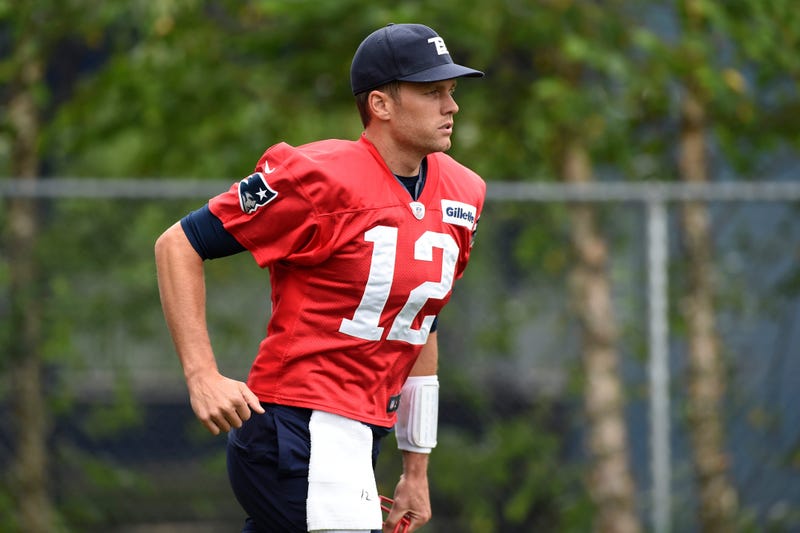 FOXBORO -- Tuesday was the first day of mandatory minicamp for the Patriots and as expected, Tom Brady and Rob Gronkowski made their returns after missing the voluntary sessions earlier in the spring.

The session lasted for just over two hours on the upper grass fields behind Gillette Stadium in showery conditions.

Five players were absent: wide receiver Malcolm Mitchell, running back Brandon Bolden, tight end Jacob Hollister, guard Joe Thuney and safety David Jones. In addition to these five players, defensive tackle Malcom Brown, offensive tackle Marcus Cannon. safety Nate Ebner, wide receivers Braxton Berrios and Cody Hollister and cornerbacks Cyrus Jones and Jonathan Jones spent the session working out on the lower grass field, which is typically where injured players who are working their way back go.It's also worth noting wide receiver Kenny Britt suffered a lower body injury towards the end of the workout and didn't return. It didn't appear overly serious, but it seems unlikely he will be back on the field this week.

Here are some quick observations.

-- Brady looked like he usually does at this time of the year, so missing the spring sessions didn't appear to impact his play at all. One of his better throws was a long completion to Britt over Jordan Richards and Damarius Travis in a 7-on-7 drill. The two connected for another touchdown later on against Eric Rowe. He also missed Britt on a long throw and was visibly upset with himself.

-- Gronkowski returned as himself, as after making a nice catch in 7-on-7 work he had some fun with himself in typical Gronk-fashion. It is worth noting Gronkowski and Brady didn't get a great number of reps together, but when they did Brady looked his way a lot. The defense also seemed to be very physical with the tight end.

-- Brady and Bill Belichick didn't appear to speak at all during the session.

-- As a whole, the session had much more intensity than any of the two OTA sessions the media was present for. It wasn't just the players either, as the coaches were into it as well. At one point when the offense went offsides, Belichick made the entire unit (coaches included) run a lap and was visibly upset.

-- For the first time this spring, the media saw Julian Edelman compete in all the drills. The team seems to be staying patient with him as he comes back from a torn ACL.

-- With Brady back, he got the majority of the reps with backups Brian Hoyer and Danny Etling having their snaps decreased significantly. Hoyer did make several nice throws and Etling continues to spend plenty of time with assistant quarterbacks coach Jerry Schuplinski.

-- Cornerback Jason McCourty hasn't participated in any drills yet when the media has been present, but isn't on the lower fields with players rehabbing so it's unclear what his status is. He did address the media afterwards, which is a positive sign.

-- Offensive linemen Trent Brown and Isaiah Wynn didn't participate in competitive drills, but during walkthroughs Brown was at left tackle with Wynn at left guard. This likely will change when the Patriots get all their offensive linemen back on the field together.

-- Undrafted rookie cornerback J.C. Jackson continues to get a good look with the first-team defense. As was the case last week, he lined up opposite Stephon Gilmore in 7-on-7 and 11-on-11 work.

-- Tight end Will Tye and running back Mike Gillislee both dropped passes and made mental mistakes that drew the attention of the coaching staff.

-- Unlike the past sessions the media was present at, there was a lot of special teams work done, especially kickoffs. It seems the team is still adjusting to the new rules and figuring out what works best.

-- Several members of the Iowa coaching staff were in attendance.

There are two more minicamp sessions scheduled for the next two days with the media attending both.