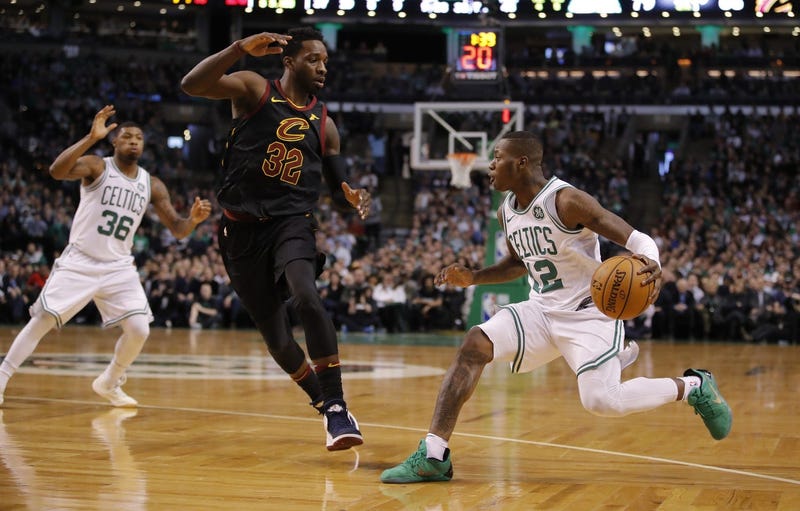 Celtics head coach Brad Stevens has been able to spin the loss of his two stars into a positive situation all season. Why stop now?

“As far as we’re concerned, there’s a power in being naive,” he said at Friday’s practice of his looming opponent and bigger stage.

He had a point, but how naive really are these Celtics to LeBron James and the Cavaliers? It’s clearly a completely different squad in Boston right now, but this will be the third time in the last four years the teams are meeting in the postseason.

“We’ve all played against Cleveland now a bunch, and because they’re on TV all the time we’re watching them just like everybody else,” Stevens half-joked. “...I think there’s a lot that everyone knows that makes LeBron so great.”

All you have to do is watch one of those games that are always on to learn about why James is so great, and only he could know everything on that list.

Maybe someone who has played beside him knows almost as much, though.  Just because Celtics star Kyrie Irving is injured doesn’t mean he can’t play a role in preparing his new team for his former teammate.

“I spent a lot of time with [Irving] yesterday, and I’m sure he’ll spend a lot of time talking to our players individually,” Stevens said. “[we] certainly pick Kyrie’s brain on not only [James], but the other guys around him.”

While preparing for James is obviously a task any opponent needs to acknowledge -- Stevens said the Celtics will guard him “as a team” -- Stevens kept harping on the guys around him. After a largely uninspiring first round against the Pacers, James’ teammates emerged in the second round in the Cavs’ sweep of the Raptors. One of them is Tristan Thompson, who “treats every shot like a miss” according Cleveland coach Ty Lue. With his offensive rebounding on fire again, the Celtics can’t (and aren’t) just treating this like The LeBron Show.

“LeBron draws so much attention, and because of that he gets you scrambling,” Stevens started, ”but first and foremost those guys are tremendous offensive rebounders individually.”

Kevin Love also returned to form as a huge Spot Up threat in the second round and leads the team with 10.1 rebounds in the playoffs. Cleveland’s roster dominates the efficiency rankings in the playoffs with James, Thompson, Kyle Korver, Larry Nance, and George Hill in the Top 10.

So no, the Celtics aren’t even going to pretend James isn’t one of their biggest concerns. He’s leading the playoffs with 34.3 points per game, he’s attempting more shots than ever while somehow staying efficient, and his 9 assists per game average is No. 4. Even by his own standards, he’s an absolute menace right now and you can’t ignore it. They’ll consult Irving, they’ll approach James with “totally a collective effort,” but they won’t let him spend too much time in their brains.

That’s particularly hard to do with the way he’s rolling into this match up, and that’s exactly why a little dose of naivety doesn’t hurt.