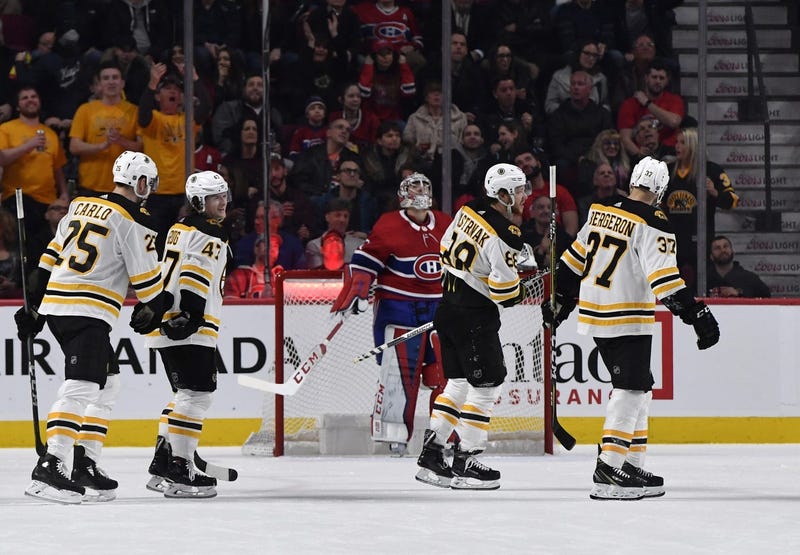 A now 16-game point streak for the Bruins, extended by way of a 4-1 victory over the Canadiens on Saturday night in Montreal, has reminded you how utterly impossible it can be to stop the members of Brad Marchand-Patrice Bergeron-David Pastrnak line.

That’s just on their own, too. Never mind when together and in sync.

But as the face of this streak, with a combined 23 goals and 50 points in 15 games, the trio decided to once again put on a show, and combined for six points.

This time with Pastrnak, who ranks third among the three in production over this stretch, taking the lead.

Trailing the Canadiens in the second period, the 21-year-old found a way to successfully turn nothing into something when he banked a puck off Carey Price and into the net for his 19th goal of the season. It was the kind of goal that happens when everything is going right (which is obviously the case for the Bruins), and one you allow when everything is going wrong (exactly like it has for the Canadiens seemingly all year).

It also reminded the Canadiens that No. 88 is dangerous from absolutely anywhere.

And that led to the B’s second goal of the night.

With their consistently stellar puck-possession game on display in the attacking zone, a Bergeron dish to Pastrnak forced the Canadiens to try and eliminate Pastrnak’s time and space. He responded with a pass to Torey Krug, and Krug completed the clinic with a simply fantastic blocker-side blast up and over Price, just 1:57 after their first goal.

Taking a lead into the third period, where they’ve been virtually unbeatable this season, the Bruins appeared to extend their lead to two when Bergeron connected on a feed from Marchand for the power-play dagger. But an offside review brought it back.

No sweat, that just meant more valuable ice for Pastrnak.

In need of that insurance goal to count, Pastrnak went with the simple possession play of an offensive zone wraparound pass back to the point and immediately drove back to the front of the net. With a shot on net, Pastrnak collected a rebound, put a chance on Price, and then hammered his own rebound home for the (real) third B’s goal.

Riley Nash finished things off with an empty-net goal, but with an assist from Marchand, meaning that the Black and Gold’s top line found a way to factor on all four tallies.

And shockingly, it all feels like no big deal.

It was Marchand that scored the shootout winner last week in Montreal and also recorded the power-play dagger on Wednesday when the Habs visited Boston, Bergeron that came through with a hat trick on Thursday in Brooklyn, and Pastrnak tonight.

It’s an absolutely impossible combination to stop, if only because all three players have the capability of taking any single game over, and with options behind them even if you’re able to do just that. (Few have proven capable of stopping them, by the way.)

It’s crazy to think that we’ve hit the point where this -- with the trio now boasting a line featuring 25 goals and 56 points in the last 16 contests -- almost seems normal.

The Bruins, who are now just three points behind the Lightning for the most points in the NHL, will look to make it 17 straight games with at least one point when the Devils come to Boston’s TD Garden for a Tuesday night head-to-head.