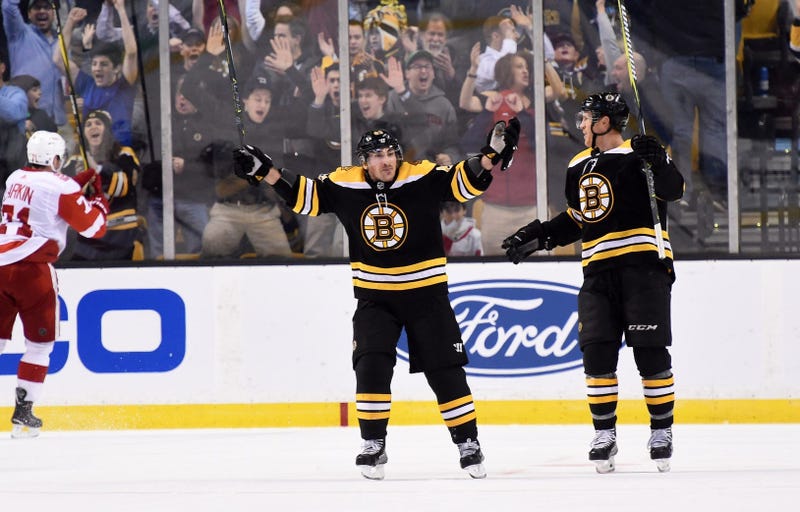 The Bruins may currently skate without their most important and downright dominant center in Patrice Bergeron, but as a 6-5 win over the Red Wings told us, that apparently can’t and won’t slow down the production of that center’s go-to winger, Brad Marchand.

Back on Garden ice after Marchand capped a comeback overtime over the Canadiens on Saturday, the 5-foot-9 upped his game and carried the B’s with three goals (including another overtime winner), and with two assists factored in all but one of their six goals.

“Well, I appreciate all of it,” Bruins head coach Bruce Cassidy said of Marchand’s timeliness and knack for this late-game production. “I’ve known Brad a long time. I’ve got a lot of respect for the way he plays the game, the way he conducts himself as a person, as a pro, and we need it. Again, I was chuckling after the game because there he is, puck finds him, but he’s on it, doesn’t quit, made some real nice plays tonight.

“Him and [David Pastrnak], I thought, really had their thing going right now, and Riley [Nash] has complemented them, and it’s worked out well.”

Pacing all Boston shooters with six shots on net (and on a team-high eight attempts in total), Marchand came through with some tremendous movement on the Black and Gold power-play, which paved the way for Torey Krug’s first-period power-play tally, and helped Marchand bank a puck off and in against Jared Coreau for their fourth goal.

“I think we were moving more tonight,” Krug said of the power play’s noticeably crisper delivery. “We weren’t as static as we have been in the last few games and when we do that, Brad can start with the puck, Pasta can start with the puck. And we’ve got two big guys in the slot. I don’t know if they can cover everything. So we did a better job of moving around tonight and it opened up some lanes and we made some plays.”

But perhaps most importantly (especially with the Krejci line held in check), Marchand also showed an improved ability to not completely cross the line that takes away from him being the elite scorer he’s become for these Bruins. And I say ‘not completely’ only because No. 63 was successfully goaded into one penalty (a slash against Gustav Nyquist right off the faceoff) by a Detroit squad that clearly targeted him all game long.

“I thought they were trying to get to him. I thought he did a good job with that,” admitted Cassidy. “You know those [penalties] at center ice when they pick one guy; they’re kind of annoying to a coach because, clearly, their guy – they’re jabbing each other and it’s like, really? It has no effect on the play. But I thought [Marchand] did a good job.

“He’s going to be targeted every night, so he has to get used to that.”

And with the overtime goal, Marchand moved into sole possession of first place on the franchise’s overtime goals list, with 11, just days after moving into a three-way tie for first place with Dit Clapper and Glen Murray. The goal also gives Marchand the ninth-most overtime goals among active players, and with Marchand having skated in at least 184 games than the eight skaters above him in this stat (Alex Ovechkin currently leads all active NHLers in this stat, with 22 overtime goals in his career).

It’s a remarkable accomplishment given Marchand’s career path from extra skater to fourth-liner to perennial All-Star. And one that’s come largely due to the opportunity the Black and Gold coaching staff gave him about six years ago, according to Marchand.

“A lot of it is really based on opportunity,” Marchand, who has the fifth-most points among left wingers since the start of the 2011 season, said after Tuesday’s win. “You look at a lot of the guys around the league, a lot of the top scorers and if they’re not playing power play in the big situations then it’s tough to produce the same way.  So I feel very fortunate that I’ve been put in this position, I’ve been playing with phenomenal players for a very long time now and they’re giving me a lot of opportunities.”

His teammates, meanwhile, have become used to nights like this.

“He’s been a big time player for our team for a long time now, and he obviously enjoys being that guy,” said Krug. “He had that edge tonight physically and he had that edge around the net. And he was scoring goals and making plays. He’s obviously a big part of this team so it’s just another night from him on our side and we are glad to have him.”

Same for the 17,565 that got to throw their free hat in honor of Marchand’s latest night.