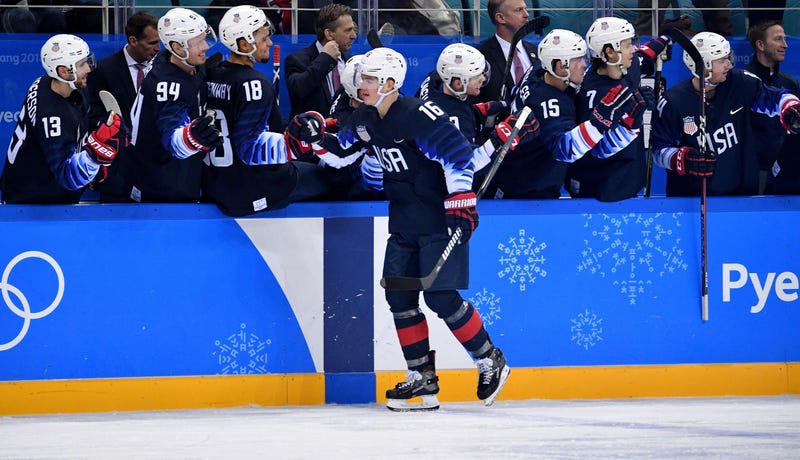 The first year of a clear youth movement from Don Sweeney, Bruce Cassidy, and the Bruins has come with seemingly unparalleled success, as the Black and Gold sit just a few points behind the Lightning for the most in all of the National Hockey League.

But believe it or not, the Bruins have even more young guns on the way.

And the obvious next one, Harvard’s Ryan Donato, has picked the 2018 Winter Olympics as his latest stage to shine on in a preview of what’s to come.

Skating for an NHLer-less Team USA squad, the 21-year-old Donato has come out blazing with three points through his first two games, including a Thursday night effort that saw him score both American power-play goals in a 2-1 victory over Slovakia.

Ryan Donato with a LASER! He gets @usahockey on the board against Slovakia. #WinterOlympics https://t.co/zLZMW4yf7g pic.twitter.com/WtDYlAta0A

Ryan Donato with a LASER! He gets @usahockey on the board against Slovakia. #WinterOlympics https://t.co/zLZMW4yf7g pic.twitter.com/WtDYlAta0A

While we can bicker over the quality of Donato’s early competition -- Slovenia and Slovakia are not Olympic powerhouses, even with NHL players -- there’s no doubt that his tallies have been skillful goals. And his overall game, even with slight blemishes defensively, has seemed polished enough to hack it in a second- or third-line scoring role.

You could even say this has been just a continuation of a downright dominant season with the Crimson, as Donato departed for South Korea with the NCAA lead in goals scored, having scored 21 goals (and 31 points) in 23 games this season.

But this latest breakout has come with increased word that Donato is going pro and joining the Black and Gold once his college season wraps up, and right in time for deadline season, where the Bruins have remained largely quiet in terms of a legitmate pursuit of one of the many rentals available.

While Donato has remained largely mum on this subject (he almost has to in the NCAA), this would be the second straight season a B’s prospect did this, as both Charlie McAvoy and Jakob Forsbacka Karlsson opted to do this once Boston University’s season ended. Forsbacka Karlsson would play in the B’s regular-season finale while McAvoy, of course, logged bit minutes in the 2017 postseason.

And similar to how they played the McAvoy, Forsbacka Karlsson, and Anders Bjork situations, the Bruins have remained fully on board with Donato’s plans, and have had no issues with letting him stay at Harvard for as long as he would like to. That’s something that Donato, who is not expected to even consider going the route of Jimmy Vesey and burn the Bruins to have his pick of the lot as a college free agent, has clearly appreciated.

If these performances continue, though, Sweeney may have no choice but to get on the next plane to Pyeongchang and see what he can do to move those talents to the NHL.