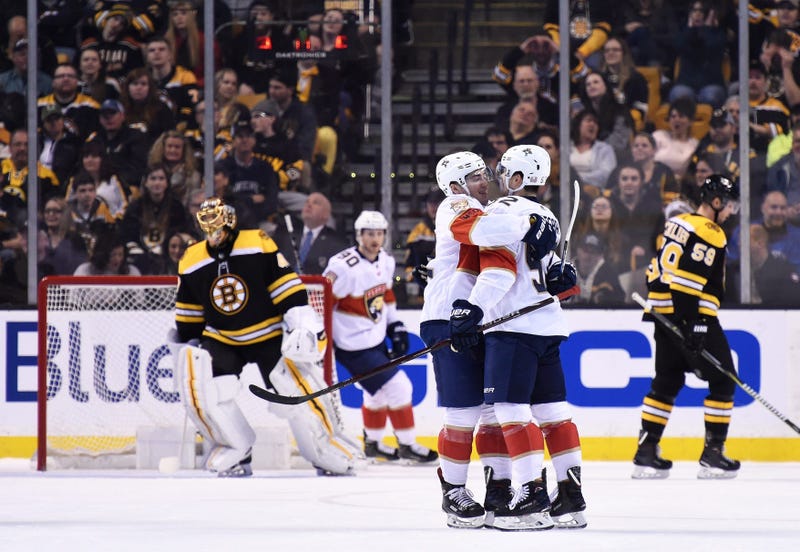 The Bruins successfully battled almost everything to give themselves the chance for home-ice advantage through (at least) the first three rounds of the Stanley Cup Playoffs.

They survived a March full of injuries (the Bruins officially finished the regular season with just one -- one! -- game featuring no players on the shelf due to injury), a late-season grind that saw the Bruins play 21 games in just 39 days, and some final week no-shows to have a chance at capturing the No. 1 in the Eastern Conference.

But that alone was not enough to push the Bruins to victory on Sunday, nor home ice throughout the Eastern Conference's road to the Stanley Cup Final.

Instead, it was some unusually sloppy defense, suspect goaltending, and sluggish decision-making through the first 40 minutes of an undeniably late start that ultimately proved to be too much to overcome in a 4-2 loss to the Panthers.

Allowing an early goal off a turnover and tying things up at 1-1 behind a David Backes goal, the Panthers responded with the next two goals of the game. And even when David Pastrnak brought the Bruins back within one midway through a dominant third period, Evgeny Dadonov put the Panthers up by two with under two minutes to play.

It was the kind of backbreaking goal that summed up a game that lacked the punch required for a game of this magnitude, and was handled honestly within the B’s room.

“It’s an opportunity lost,” Bruins goalie Tuukka Rask, with stops on just 22 of 26 shots against (and a third goal he absolutely cannot give up), said. “We didn’t deserve to win and that’s the reality. Season’s over, regular season’s over, moving on.”

So now a first-round date with the Maple Leafs awaits Cassidy’s club.

“I’m looking forward to it. Two Original Six teams. They’re young. We feel – they’ve got some veteran guys – [Patrick] Marleau, [James] van Riemsdyk, certain guys that they expect to lean on. [Nazem] Kadri’s kind of in between. We have some younger guys; we have some guys we’re going to lean on. We both exited in the first round last year, probably learned some lessons,” Cassidy said. “They’ve got a great coach that I’ve always looked up to and tried to learn from. I think, both good goaltenders.

“It should be a terrific series if both teams are on their game, and that’s playoff hockey right there, a lot of speed, probably a lot of physicality. I thought the games during the year, even though we lost more than we won, I thought we were very competitive and could easily have won. We let one get away in the last minute earlier in the year, and that’s when, I think, before we had really learned how to win, what to do to play winning hockey down the stretch. We’re a lot – a different team than we were way back then.”

But the Bruins have to get better in more than a few areas between now and Game 1.

The Bergeron line, featuring three players that likely would have been given a rest had the Bruins taken care of business earlier this week, has to be better. Teams are getting increasingly physical with Brad Marchand, and that’s something he’ll surely have to battle through when the whistles get swallowed in round one. The Bruins’ defensive rotation needs some fixing, too especially when it comes to their d-zone play. The Bruins have allowed entirely too many scoring chances from between the circles, and their sticks are not getting in shooting lanes like they are when the Bruins are playing their game at the highest possible level. Cassidy acknowledged both after the loss.

First, however, and finally: some much needed rest.

The B’s recent schedule has been downright unforgiving with games just about every other day and thus short on practice time, and the Bruins are about to get their first three-day rest since February. This will do wonders for those working their way back from injury, such as Rick Nash and Sean Kuraly, as well as Riley Nash, who is expected to begin skating this week with the hope of a Game 1 return.

“Thursday, I believe will be the 50-win team that we saw all year,” said Cassidy. “We’re not going to allow one game to define us, yet we understand the meaning: We let one get away, an opportunity lost to have home-ice advantage, and we’ll see if that haunts us down the road. I think it’s too early to tell that right now.”