The Bruins were the hottest team in the Eastern Conference going into Tuesday. They were 8-1-0 in the month of January and riding a five-game winning streak.

The good vibes generated by the combination of that winning streak and Willie O’Ree’s pregame number retirement ceremony were quickly forgotten. By the end of the first period Tuesday night, the Bruins trailed the Carolina Hurricanes 5-1 and found themselves getting booed by the TD Garden crowd as they headed to the locker room. Things never got better, with the final score climbing to 7-1 in Boston’s most lopsided loss of the season.

The Bruins could not seem to do anything right. Teuvo Teravainen found a soft spot between Derek Forbort and Charlie Coyle on Carolina’s first goal. A miscommunication between Matt Grzelcyk and Charlie McAvoy left Jesperi Kotkaniemi alone in front to bury a rebound on the second. Sloppy turnovers from Brandon Carlo, Urho Vaakanainen and Connor Clifton led directly to the third, fourth and fifth goals, respectively.

Bruins coach Bruce Cassidy pulled Tuukka Rask after the first. In his second start of the season, Rask ended up with a hideous line of five goals allowed on 12 shots. Based on Cassidy’s postgame comments, pulling Rask was not about Rask’s play, though. He laid the blame for this disaster elsewhere.

“We didn’t do a very good job in front of him,” Cassidy said. “I think there’s a goal we got beat one-on-one again, they got to the interior ice. I think that’s a save you want. But other than that, I don’t… Bang-bang play on the first one. A deflection after we just made it a 2-1 game. We put guys on the ice that we think are defensive-minded players, and that was a big letdown for us. The guys that are used to being relied on to keep the puck out of the net and be good, solid defensive players -- kind of the bottom of the lineup and some of the D that are relied on -- they just didn’t get it done tonight, for whatever reason.

“No, I don’t think we did anything in front of Tuukka to help him out tonight. It would’ve been one of those nights we would’ve needed an unbelievable effort from him to get any points at all. That’s an unfair ask.”

Rask, for his part, took on more of the blame himself and refused to point the finger at his teammates.

“I can only speak for myself. I have to help them out a little bit,” Rask said. “Everyone’s not gonna have their legs at all times. As a goalie, you have to be there, step up, make a couple saves. Like you saw in the first, I should’ve made two or three saves there and kept it tight. Just one of those nights.”

Just one of those nights indeed. So, what do the Bruins do after such a night? Rask said he had already flushed it before even meeting with the media via Zoom.

“It’s gone. It’s gone already,” Rask said. “One thing you learn over the years, you’re never as bad or as good as you think. So you just kind of learn to keep it even-keel and trust the process. … Just keep plugging away tomorrow and go from there.”

“I think you have to burn the tape on that one,” Bergeron said. “That was not our team. We have to be better. I think the last few weeks, we’ve all seen how good we can be and the steps forward that we’ve taken. Obviously learn and rectify the things we have to be better at, but to me it was just flat. Just no execution. It has to be better for sure, but I think it’s one of those you burn and you try to move on.”

Because the Bruins had been playing so well since the COVID pause, it’s a little easier to buy the idea that this was just a one-off horrible night. If this had come earlier in the season, when the Bruins were struggling to beat any good teams, it would be a lot harder to give them any benefit of the doubt.

But now they have some quality wins they can fall back on. They beat both the Lightning and Capitals convincingly last week. They won a hard-fought, physical game over a good Predators team on Saturday. Those shouldn’t be forgotten because of one bad night.

Of course, the Bruins now have to make sure it is just one bad night. They’ll continue to be tested over the next week, beginning with another matchup with the Capitals on Thursday. Then it’s a pair of playoff bubble teams in Winnipeg and Anaheim, followed by a big road game in Colorado next Wednesday.

Even the Hurricanes, who have the best record in the NHL after Tuesday, recently had one of these stinkers. They lost 6-0 to the Blue Jackets, a non-playoff team, last week. They bounced back with a pair of blowout wins since.

The Bruins will get one more chance to prove themselves against the Hurricanes in the regular season. Before then, they can prove they’re capable of bouncing back from this. 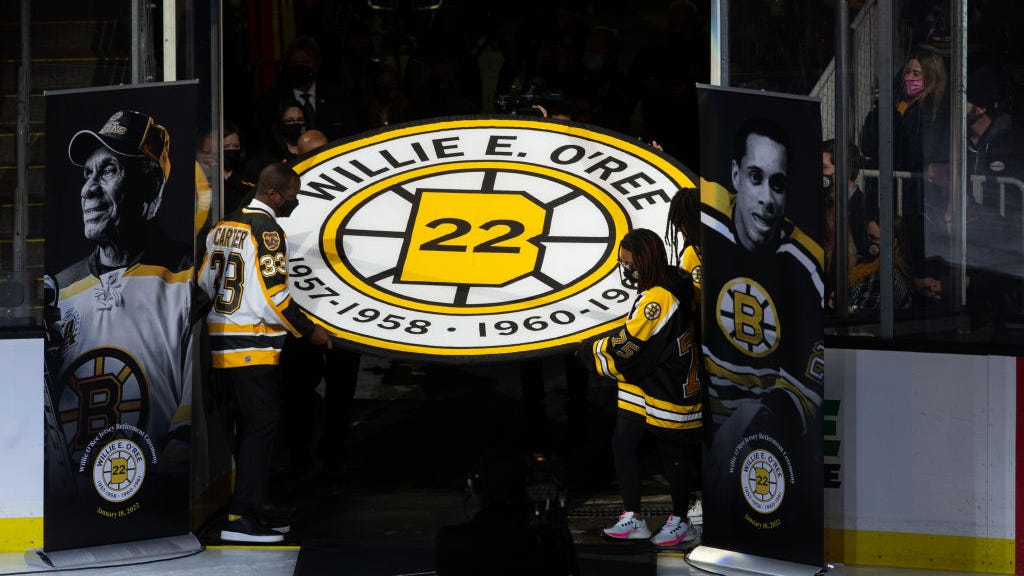 Willie O’Ree ‘thrilled to be a part of the Bruins forever’ as No. 22 is retired