With the Bruins facing a cap crunch this summer, one of the first places many fans and analysts looked for a potential source of salary relief was Nick Foligno.

It was only natural. The 34-year-old Foligno has a $3.8 million cap hit and was coming off a rough first season in Boston that saw him score a career-worst two goals.

Skate Pod: Breaking down the battle for fourth-line jobs

The math just didn’t add up. Trading or buying out Foligno or even burying him in the minors would have been understandable.

That didn’t happen, though. While his roster spot still isn’t guaranteed, Foligno remains with the Bruins as they ramp up for the regular season, and he’s determined to prove that last season was a fluke and that the player who was once a lock for at least double-digit goals is still there.

What makes him think he can do that? For starters, he feels a lot better. After spending last summer recovering from a back injury and then battling other injuries throughout the season, Foligno says he just never really felt like himself. This summer was much better, though, and he says he now feels “rejuvenated and excited.”

“I think last year, just like I said, I could never get going, and it was just one of those years,” Foligno said Monday. “…I think I know what I bring. I know what I can do, and especially the way I feel right now. I'm looking forward to just helping this team, just like when I got here, with a mindset of putting all that in the past, what happened last year, and just getting ready to be a good player and teammate like I always have been. I'm feeling really good. I like my game. I like where it's trending.”

Foligno said he doesn’t judge himself just on goal totals, noting that his play away from the puck and filling the role he’s asked to fill are important too. To that end, it’s worth noting that Foligno’s 5-on-5 defensive numbers last season were quite good. Among the 13 Bruins forwards who played more than 20 games, Foligno ranked third in Corsi against per 60 minutes, goals against per 60, and expected goals against per 60.

That said, he knows two goals isn’t good enough. What is “good enough” is debatable, but it’s worth noting that coach Jim Montgomery set a rough target of 10-plus goals for any bottom-six forward when asked about it Monday.

“Two goals isn't what I expect,” Foligno said. “I just came in and just tried to reset and work on some of the things I always work on. I know I can score. I'm not worried about that. I think my track record speaks well for itself, but it's just more about putting myself in positions to do that. … I’m excited and looking forward to the opportunity to play my game and be a big factor for this club that I expect to be.”

The Bruins obviously expect a bounceback as well. If they didn’t think Foligno had one in him, they probably would have moved on from him this summer. Montgomery, for one, believes Foligno can be an identity-setter in the bottom six.

“He’s someone that has great leadership and someone that we're looking for to help create a clear identity on the third or fourth line as far as puck possession, being hard on people, being relentless on top of pucks,” Montgomery said. “…I expect him to be a big part of what we do this year. I think he's playing a lot freer and he's getting on top of pucks, he's creating a lot of loose pucks, he's getting to the net front. And that's where he's made his whole career is at the net front in that third circle between the two circles where goals are scored.”

That’s what Montgomery is “looking for.” Whether he finds it remains to be seen. With youngsters like Jack Studnicka, Oskar Steen, Johnny Beecher, Marc McLaughlin and A.J. Greer all trying to force their way into bottom-six jobs, Foligno will have to win his job -- both to start the season and to hold onto it a couple months from now when the Bruins will have to free up some cap space when Brad Marchand and Charlie McAvoy return.

To his credit, Foligno understands that and embraces the challenge.

“No one should ever feel comfortable,” Foligno said. “I never come into a camp, in all the years I’ve played, thinking I’m on the team. Never. I think it’s just a mindset you have to have. Otherwise, I think as soon as you get complacent, that’s dangerous for your team and for you as an individual. So any time you’re seeing guys push, it’s so good for the organization because you know you’re gonna get the best from everybody else who’s maybe ahead of them on the depth chart. That’s important for our group, and I think you’re seeing that. There’s guys who are pushing, which is great, and it’s our job to make sure we continue to show what we can do as players.” 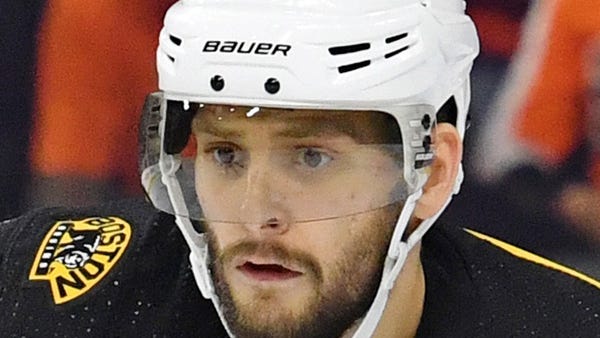