The good news for the Bruins is that they have Brad Marchand, who is capable of taking over a game and putting the team on his back on any given night. That is exactly what he did Sunday, scoring one power-play goal in the third, setting up David Pastrnak for another, and throwing several big hits to lead the Bruins to a 3-2 comeback win over the Vancouver Canucks.

One more look before we turn in. 🍝 @pastrnak96 | #NHLBruins pic.twitter.com/QdfvXzZumT

The bad news is that the Bruins needed that kind of Marchand takeover to squeak out a win over the Canucks, the team with the fourth-worst record in the NHL.

A win is a win, yes. And in a season where the Bruins look like a team that might have to fight tooth-and-nail all year long to make the playoffs, getting two points is the priority, no matter how they do it.

That said, it’s hard to feel too encouraged by Sunday night’s win. The Bruins had been yo-yoing between convincing wins over bad teams and convincing losses to good teams over the last few weeks, most recently falling 5-2 against the Rangers on Friday. The hope would be that when that trend changed, it would be the Bruins closing the gap between them and the top teams, not struggling against a lesser team.

So many of the questions surrounding this Bruins team are still there, and were perhaps amplified even more Sunday.

Linus Ullmark stopped two breakaways, including one less than a minute before the Bruins tied the game at 2-2, but he also gave up two tough goals. He failed to hold onto a soft shot and prevent a rebound on the first, and he didn’t get down in time to stop a shot through traffic on the second. One part of that is encouraging. The other is reason for some continued concern when it comes to the goalie position.

Concerns about offensive depth weren’t exactly eased, either. Let’s start with the fact that Bruce Cassidy made both Jake DeBrusk and Erik Haula healthy scratches for the game. That’s two-thirds of what was supposed to be an improved third line watching in suits. Cassidy said they need more from DeBrusk in other areas if he’s not scoring (he has three goals and three assists in 17 games), and they need “more compete” from Haula (who has just three points in 17 games).

Perhaps this benching will wake those two up. The Bruins better hope so, because without them, they didn’t really have a third line on Sunday and essentially dressed two fourth lines.

There were some positives from that group, especially from a Nick Foligno-Trent Frederic-Karson Kuhlman line that created some quality chances throughout the game, even if they ultimately didn’t score. The Anton Blidh-Tomas Nosek-Curtis Lazar line was quieter for the most part, but they did score a goal when Blidh raced into the zone and fired a long wrist shot that beat Jaroslav Halak. Blidh, however, also suffered an upper-body injury late in the game and could miss some time.

The Bruins certainly have options for a good fourth line in that group, but aside from Foligno, none of them are players you would really expect to produce at a third-line rate over any long period of time. DeBrusk, Haula and perhaps Jack Studnicka remain the best bets for that, but whether any or all of them ultimately do so remains to be seen.

Cassidy praised the Foligno-Frederic-Kuhlman line in particular after the game, but he also expressed a desire for more physicality from players other than Marchand. It’s safe to say that some of the guys in this bottom-six group were on his mind.

“Real good job on his [Marchand’s] part with the physicality,” Cassidy said. “Listen, he can help you win in a lot of ways. We saw it offensively. We’ve been seeing it on the power play, penalty kill here for years. The physical part was good. And that’s where you hope other guys… you know what I mean? It’s like, listen, he’s our best player, plays the most minutes of any forward on our team. You hope it rubs off on other guys. That’s what you’d hope at the end of the day.”

Then there’s the second line of Taylor Hall, Charlie Coyle and Craig Smith. They had plenty of possession Sunday night and gave up little in their own end, but they also didn’t do a whole lot with that possession and combined for just five shots on goal. The Bruins would love to see Hall, in particular, get going more, as he now has one point in the last five games.

Marchand taking over and leading the Bruins to victory was great. Pastrnak making a more concerted effort to shoot -- he led all players with seven shots on goal and 18 shot attempts -- was encouraging. Charlie McAvoy was his usual dominant self while playing a game-high 27:52.

But at the risk of sounding like a broken record, the Bruins still need more outside of their top line and McAvoy. What they got Sunday night wouldn’t have been good enough against a team better than Vancouver, and at some point soon the Bruins are going to have to find a way to start getting some wins against playoff teams. 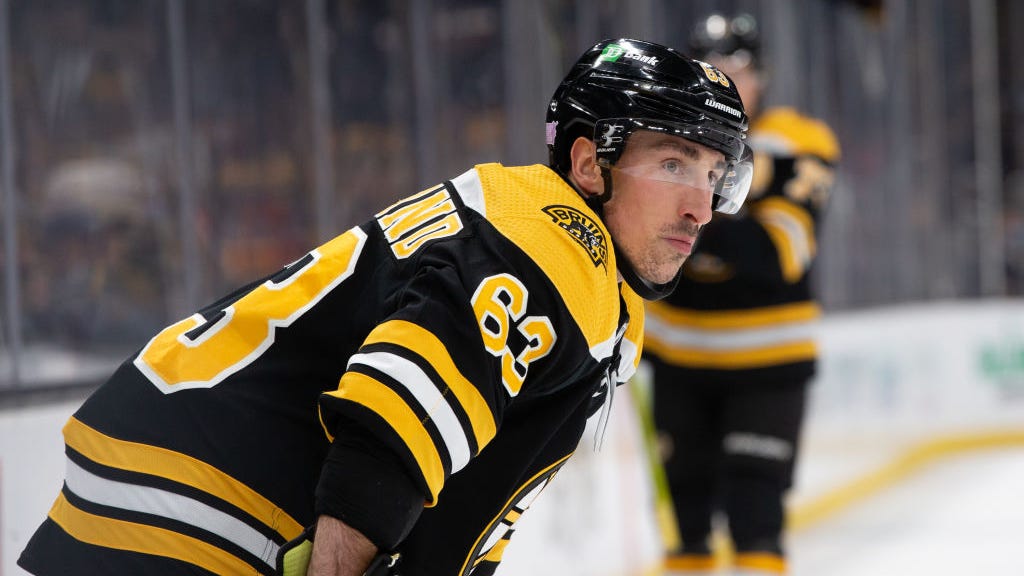 Brad Marchand responds to Artemi Panarin throwing glove at him