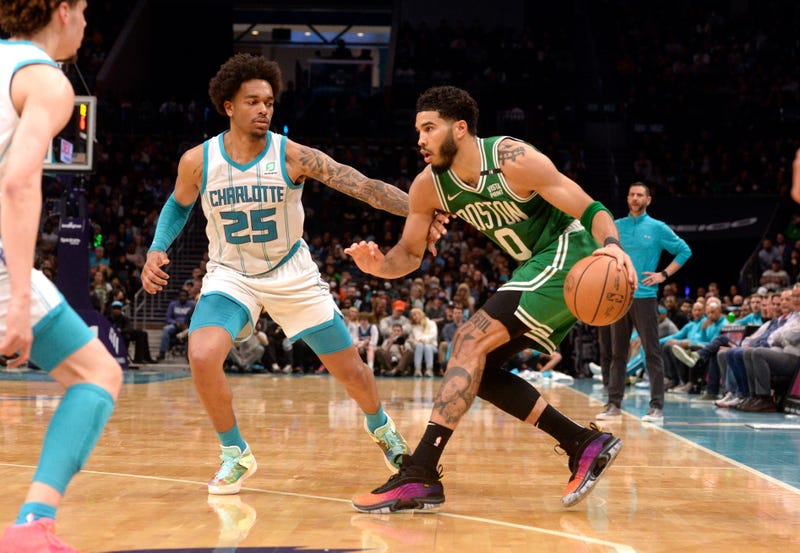 Even before he was named Eastern Conference Player of the Week, Jayson Tatum had already taken major strides after a slow start to the season. Clearly, his strong showings against Memphis and Brooklyn weren’t enough. After putting up 37 then 54, he dropped another 44 points on Wednesday to push the Celtics to 13-2 since Feb. 1.

This just isn't even fair pic.twitter.com/R6gcRbQNhM

While it was reasonable to ask earlier in the season if Tatum was still a top-15 NBA player, that’s not a discussion anymore. He’s been playing like a top-10 player of late.

That last group may seem like a reach for Tatum at this stage (because it is), but a certain former Celtics player turned analyst threw the idea out there in the middle of Boston’s win on Wednesday.

“I pretty much talked to a lot of people today around the country, and they’re asking me about Tatum,” Brian Scalabrine said on NBC Sports Boston’s broadcast Wednesday. “I’m OK putting him in that top five conversation.”

Pretty sure you still have to put Giannis Antetokounmpo and Kevin Durant ahead of him. There’s reigning MVP Nikola Jokic. Maybe Joel Embiid should be ahead of Tatum, too? (Embiid is the MVP favorite, so probably not, right?)

That’s four guys ahead of Tatum — without thinking twice.

Are you comfortable saying Tatum is absolutely better than Steph Curry or Luka Doncic? The Lakers may be an embarrassment, but what about LeBron James? You can exclude Kawhi Leonard from this conversation because he hasn’t played all year, but what happens when he returns? Some might still throw James Harden ahead of Tatum (wild, I know).

He may be a greater investment than some of those older names, but remember that whole bit about recently reconsidering Tatum’s top-15 player status?

Tatum will comfortably be in the top 10 if he keeps this up and shows up in the postseason. Already talking about the top five? That’s too big a jump.

“I’m in a lot better zone than I was to start the season,” Tatum said. “But, it’s just part of it. I believe in the work I put in, and I never doubted myself. I’m just thankful my teammates didn’t doubt me either.”