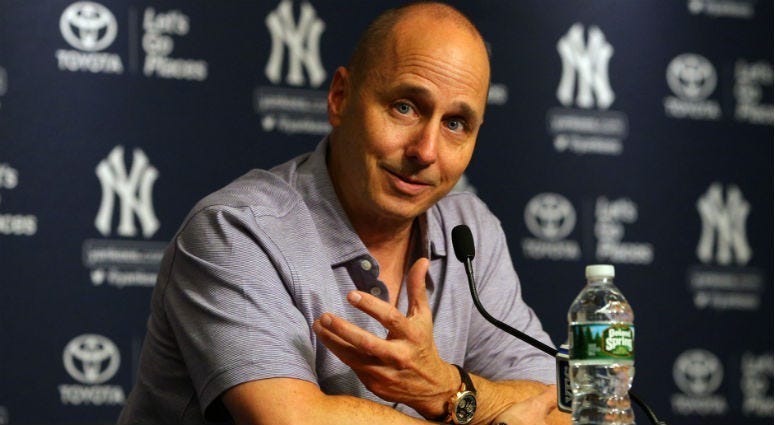 Despite reaching 100 wins for the first time since 2009, it would be hard to classify the Yankees' 2018 season as a success.

New York fell to the Boston Red Sox, 3-1, in the ALDS, ending the Bronx Bombers' season several weeks earlier than the team would have hoped.

While there's no doubt that New York's roster is filled with talent, the team has several holes it must address this offseason if they want to get over the hump and reach its first World Series in a decade.

One of the biggest question marks surrounding the Yankees this offseason is the team's pitching. Overall the team's pitcher staff earned a 3.78 ERA on the season while allowing opposing batters to hit .237. However it was the performance of the team's relievers that helped boost these numbers.

The Yankees bullpen had an ERA of 3.38 this season, good for the fourth-lowest mark in MLB, while limiting hitters to a .221 batting average. On the other hand, New York's starting pitchers had a 4.05 ERA (14th in MLB) and had a .247 batting average against.

The Yankees will have to shore up its rotation this winter if they want to overcome the Red Sox and Houston Astros in the AL. Yankees general manager Brian Cashman joined Mike's On Wednesday to discuss the state of the roster, and more specifically the team's rotation. While he didn't list any specific names, Cashman did say he expects some of the organization's young arms, such as Jestus Sheffield, Jonathan Loaisiga, and Chance Adams, to compete for spots in the starting rotation in 2019.

"I think in a big way. I think in a very big way," Cashman told Mike Francesa on how he thinks the Yankees' young arms will impact the team next season. "We're excited about the young talent and the nucleus that we've got. We've got to continue to grow and build them. But passed that, how can we add to it while we're trying to improve upon it, and what can we surround them with. It's a team sport, clearly, and our job is to attack every area of weakness and try to leave the strengths as strengths. We do have some free agent issues that every team has to deal with. How do you deal with that? So we'll see."

New York's rotation may lose a few familiar faces this offseason, as two of the club's veterans are set to hit free agency.

CC Sabathia was one of the team's most reliable pitchers this season, going 9-7 with a 3.65 ERA and 1.31 WHIP in 29 starts. Sabathia signed a one-year, $10 million with the club last year, and is likely to garner some interest in free agency.

J.A. Happ was a stellar deadline acquisition by Cashman towards the end of July. The 35-year-old looked impressive in his 11 starts with the Yankees following the trade, pitching to a 2.69 ERA and 1.05 WHIP while going 7-0.

With all of the uncertainty surrounding New York's starting rotation, Cashman said the team will certainly consider bringing both veteran pitchers back next year.

"CC and Happ I think were definitely players that participated in a really good, strong, healthy way for us and because of that, they're going to get a lot of consideration, not just from us but from a lot of people," said Cashman. "As we try to navigate the free agent side of things, we're going to wait and see where that takes us. But those guys were productive players at various different times.

"We're excited about adding to our rotation. It's going to be a focus point for us, and there's going to be a lot of competition, regardless of the available players out there. We need to continue to reinforce that rotation."

Another big question surrounding the Yankees is the performance of catcher Gary Sanchez.

Things didn't get any better for the talented young catcher in the postseason. Sanchez went 3-for-18 (.167) in New York's five playoff games, but did continue to flash his power, with his three hits consisting of two home runs and a double.

Despite Sanchez's struggles this season, Cashman made it very clear that the organization still has full confidence in their starting catcher.

"It's hard to say," the general manager said about the cause of Sanchez's struggles with the bat this season. "He started out impacting the ball in a real strong, heavy way. But then after that, I think it turned into confidence. You've got to stay positive. It's a mental game. I think for a period of time, that mental side of this game started to bite him, and his confidence wavered. Then, obviously, the injuries hit. But I think at the end, he found a little bit of his momentum and mojo back at the most important time...

"We're going to continue to bet on him because we think he's a difference maker, even though the year he had is not the one that he or we would have expected. But the capabilities are there, and we're looking forward to getting him back on track."

Here are Cashman's thoughts on several other Yankees players.

"We're proud of the acquisition. He turned out to be the best offensive player moved at the deadline. I think we got the best pitcher (Happ) and best offensive player in terms of what they were producing. I'm proud of what he did and the name he made for himself. He energized not only our offense and our clubhouse, but also our fanbase. Obviously he will get a chance moving forward to prove that it's legit or not. Time will tell."

"I thought he did great. For a young kid to do what did is pretty special. He'll be a Rookie of the Year candidate, and the numbers are pretty impressive, especially at that age. I'm proud of how he competed, and obviously he's one of the many reasons why we were able to win as many games as we did. It's the most games he's ever played- remember he played a short season the previous year because of the injury. I'm sure it took its physical toll as he grinded through this stuff as a lot of these guys have. But I think he held up strong and finished strong too at the same time.

"Exciting talent. We thought development-wise it would take him another year to finish off on the defensive side. But he was able to shore enough things up to say, 'Hey I'm ready now.' Because of that, he hopefully will be the Rookie of the Year. But what a year he did have. He impacted the ball so much. Obviously at third base, he's not a finished product. But he was finished enough to take the job and be an everyday third baseman in a pennant race in the American League, and that's pretty impressive.

"Great young talent, obviously victimized by pitch-tipping at times. We'll keep working on that, him and Larry [Rothschild>, and find ways to try to counteract that, because obviously the clubs that are good at that, when he's telegraphing things, it shows you what Major League hitters are capable of doing... It's not like it hasn't been addressed. But sometimes you revert back to some bad habits and it plays out in a certain way."