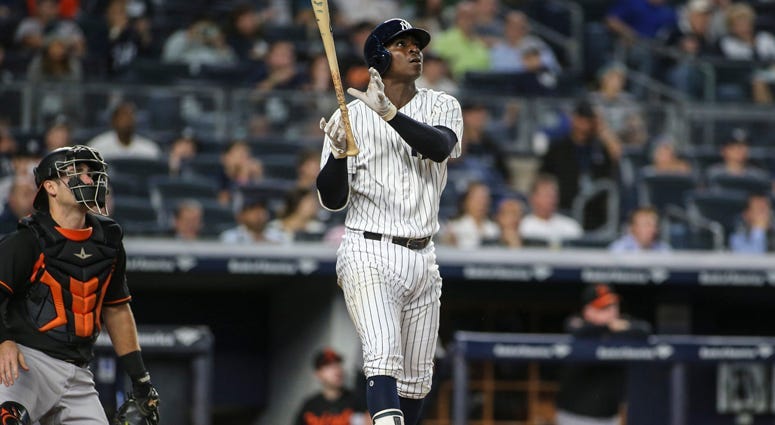 The shortstop is expected to miss the start of the 2019 season, as GM Brian Cashman told Mike Francesa Wednesday that Gregorius is expected to return sometime between June and August, saying "it could be on the early end of June, on the late end of August, or somewhere in-between."

An MRI last week revealed the tear in his right, throwing elbow. Manager Aaron Boone said he believes it occurred during the ALDS when Gregorius fielded a ball off the Fenway Park Green Monster and then threw it into the infield.

"He felt something then, and just kind of being the player, as tough as he is and as non-dramatic as he is, just kind of played with it the last couple of days," Boone said at the team's season-ending news conference.

Cashman told the media last week that Gregorius had a partial tear that was “asymptomatic” when the Yankees acquired him from the Arizona Diamondbacks in December 2014.

Cashman said because so much time had passed without the elbow issue being a problem, he had mostly forgotten about it. But he started to worry about a "worst-case scenario" when he saw Gregorius bounce two throws to first base in Game 4 against the Red Sox.

"They were un-Didi-like," Cashman said following the team's loss in the ALDS last week. "You don't see that. And so right away in the back of my mind, I was like, 'Oh boy, I wonder if we have a real problem here.' And unfortunately, the MRI confirmed that we do.

"He's tough. ... He's a special person," Cashman added. "He's also a special player. He battles. If there's something bothering him, he's wired in a way that either he doesn't feel it, he purposely conceals it. ... He just seems to be the type that, whatever it is, he's not going to focus on it, and he's going to be out there and do the best he possible can."

The 28-year-old shortstop batted .268 with a career-high 27 home runs this season.

When discussing possible ways the Yankees could replace Gregorius while he is out, Cashman pointed towards Gleyber Torres before admitting that the team could look outside the organization to fill the hole at shortstop.

"We're going to have to discuss that, too. The strategies aren't mapped out yet," Cashman told Francesa Wednesday. "Gleyber Torres is the best shortstop that we have in our system right now that we can swing over. We have Tyler Wade, you've got Ronald Torreyes, and then you have outside candidates. I'm not sure what we're going to do with it, but we're going to be forced to talk through it and come up with an idea that suits us as we wait for Didi to come back."