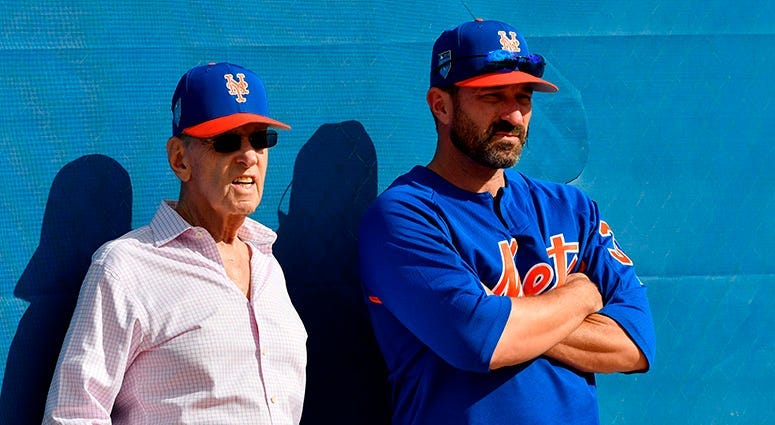 By Jake BrownSideshow: a small show or stall at an exhibition, fair, or circus

A minor or diverting accident or issue, especially one that distracts attention from something more important

When looking up synonyms for "sideshow," how about "the New York Mets"?

Let’s just take a look back at the daily insanity, absurdity and embarrassing things that have happened to the Mets since they returned from the All-Star break.

Friday:- Yoenis Cespedes says after the game he may need heel surgery to fully recover, which means he would be out eight to 10 months.- The Jeurys Familia trade is reported, but not finalized during the game. He can't come in to close out the game.Saturday:- The Mets trade Familia to the Athletics, 10 days before the deadline, for two fringe prospects and not having to pay the remaining $3 million on his contract.- Manager Mickey Callaway says he wasn’t aware of Cespedes’ comments from the night before.- The Mets lose to the Yankees 7-6 after having the bases loaded and no outs in the ninth inning while down 7-5.Sunday:- Noah Syndergaard goes back to the DL after returning for just two starts with ... HAND, FOOT and MOUTH disease.- The Subway Series finale is postponed until Aug. 13, when Mets will be left with half of their team.Monday:- News surfaces that Tim Tebow is likely out for the season with a broken hand, flushing the chance of selling tickets in Queens in September down the toilet.- The Mets lose another start for Jacob deGrom to the awful Padres after he strikes out 10 over eight frames. DeGrom becomes the first pitcher in baseball history with an ERA below 2.00 and fewer than seven wins over his first 20 starts, and is on pace to become the first pitcher ever to win less than 10 in 200-plus innings.Tuesday:- The Mets place Cespedes on the 10-day disabled list, days after activating him from DL.- The Mets call up Jeff McNeil, but don't start him.Wednesday:- The team announces that Cespedes needs to have heel surgery and is out the rest of this season and part of 2019, as well.- Jose Reyes starts over McNeil for Lord knows why.

Now let’s look at the numerous other circus acts that have happened to this franchise this season:

July 16: DeGrom’s agent says the Mets should trade him if they don’t give him a contract extension.June 26: Sandy Alderson steps away as general manager, leaving the team with no true GM. They are now led by a three-headed "monster" in John Ricco, J.P. Riccardi and old pal Omar Minaya.June 9: Citi Field runs out of fireworks on Fireworks Night following a 4-3 loss to Yankees.June 2: The Mets scrub their Todd Frazier pullover jersey giveaway due to a “quality control” issue.May 30: A fire breaks out near Citi Field's main entrance, summing up the current state of the franchise.May 9: The Mets bat out of order in the first inning and lose to the lowly Reds by one run.Dysfunctional: not operating normally or properly

Every event listed above isn’t normal or proper. Those are also only the recent events. That doesn’t mention the fact that this team was once 11-1 and is now 42-57 and sitting in the cellar of the NL East. Everything that can go wrong and will go wrong has for the Mets in what has been a complete letdown after one of the biggest two-week teases to start the season. That 11-1 record now feels like it happened in another decade.

Let’s look at one of the definitions of "sideshow" again that is important here: "A minor or diverting accident or issue, especially one that distracts attention from something more important."

While there has been an abundance of issues -- Callaway looking and sounding more lost than a vegan in the meat department, Reyes somehow still being on the roster and getting playing time over guys like McNeil, an uncountable amount of players going down with injuries, the offense regularly letting deGrom down, the bullpen blowing leads, Cespedes going MIA before returning for one game, etc. -- all those issues are distracting us from what is more important -- the incompetent ownership.

The Wilpons trickle down to the front office, which trickles down to the manager, which eventually leads to chaos on and off the field. It’s pretty evident that the Wilpons need to sell the team to someone who can change things around here. There hasn’t been enough winning, and the losing hits rock-bottom levels. This stuff doesn’t fly in New York City, especially when the crosstown Yankees are putting together a championship team with plenty of youth and talent in the farm system.

The Wilpons keep mum all the time. We almost never hear from them year after year as they count their money while the defeats pile up. It’s infuriating not just watching the Mets, but hearing new stories of ineptitude every single day. Since the All Star break, it’s literally been something new that is alarming daily, and it doesn’t seem to be stopping anytime soon, especially with the trade deadline less than a week away and more pieces getting ready to be sent off. These are some deals that can make or break the Mets' future, as they desperately try and restore some youth into a minor league system that at one point was considered stacked.

This is a professional baseball team in the top market on the planet. It’s being run and handled like the Ringling Bros. and Barnum & Bailey Circus, which is now closed after a 146-year run. The Mets are putting a product out there that has fans closing ... their eyes. It’s unwatchable. The worst part is that the on-the-field performance is atrocious, but every story off the field matches up equally. “Ya gotta believe!”

I mean, it’s hard to fathom how many misses this team has had in free agency, and also among their “top prospects." Smith has been atrocious, and Rosario has been beyond average -- and that might be too nice. This franchise is swinging and missing at everything right now. That’s an issue on a bigger scale than a manager’s decision or a player failing. That starts up top with the big boys in the suits.

Changes this offseason clearly have to be made.

The Mets need to hire a capable GM who can run the show and isn’t left penny pinching. There needs to be a clear-cut voice and not three guys banging heads against a wall trying to come to decisions.

The Wilpons have to at least sell some of the team and have someone else run the baseball operations. Fifty million dollars of the Mets' payroll is not playing this season in Wright and Cespedes. Without them, this is considered a below mid-market team ... IN NEW YORK FREAKING CITY!

There isn’t much hope right now. The future is bleak. There aren’t too many things to point to and get excited about. A new manager is likely on the way after they went the first-time manager route last offseason, which has fallen flat on their face. Even deGrom, who has been sensational, is a question mark if the Mets don’t lock him up to an extension. I'm a fan that usually goes to 30-40 games a year...and this year I've been to seven and I live 15 minutes from Citi Field. It's unwatchable baseball, and a team that isn't worth spending my money on, even if it's $5 a ticket.

It’s hard to say, "Oh, the Mets can get X, Y, and Z this offseason and make the playoffs." This team has made some dreadful offseason decisions in the past, and it would take a miracle to right the ship overnight with the way they are operating. They have turned optimists into pessimists and sent pessimists off the deep end.

Point the finger at the players, point it at the manager, but most importantly, point it at the Wilpons and the front office executives, who have been nothing short of a catastrophe. If nothing changes, Mets fans will go to their graves with "Ya gotta believe" and "There’s always next year" on their tombstones.