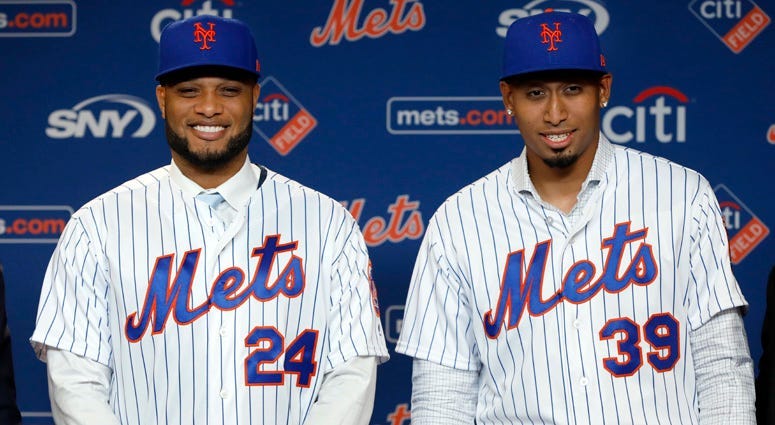 NEW YORK (WFAN) -- Brodie Van Wagenen formally introduced his first two major acquisitions as Mets general manager on Tuesday and then made it clear his work is not done.

"We did not make this move to have this be our last move," Van Wagenen told reporters at Citi Field as second baseman Robinson Cano and closer Edwin Diaz officially became Mets. "I think we have talent already on the roster. I said consistently throughout my tenure that we want to bolster our team, we want to improve our production next year, we want to win more games, and hopefully we can continue to add more talent around guys like this, and that's our mission."

Cano, an eight-time All-Star, and Diaz, the reigning major league saves leader, were added in a seven-player trade with the Seattle Mariners. In the deal, the Mets gave up outfielder Jay Bruce, reliever Anthony Swarzak and three prospects -- outfielder Jarred Kelenic and pitchers Justin Dunn and Gerson Bautista. Kelenic and Dunn -- both recent first-round draft picks -- were two of the Mets' top four prospects, according to MLB Pipeline.

The Mets are also receiving $20 million to help pay for the remaining five years, $120 million left on Cano's contract.

"As I stood in front of you a few weeks ago, I stated that this organization intended to be relentless and fearless in our pursuit of greatness," Van Wagenen said. "This trade should be a signal to our players and to our fans that words alone will not define this franchise, rather it will be hard work, collaboration and unwavering commitment.

"We have a winning mindset, and collectively we believe that everything is possible and nothing is impossible. And it is that conviction that led us to this moment."

MORE: Brown: Why Mets Fans Should Be Thrilled With Cano, Diaz Trade

Van Wagenen chalked up parting ways with Kelenic and Dunn as the price of doing business while in win-now mode.

"The opportunity to go fill two primary needs that we laid out at the start of the offseason was paramount in trying to get this deal done, and we were willing to make those sacrifices," he said.

Cano returns to the city where he started his major league career. The 36-year-old infielder spent his first nine seasons with the Yankees before signing a 10-year, $240 million contract with the Mariners in December 2013.

"Happy to be back in New York, and just can't wait for the season to start and be able to go out there and perform and help the team to win a World Series," Cano said.

"For me, first of all, this organization was across the street (from the Yankees) so I know," Cano said. "I played against them a lot. Also, the fan base in New York (is) the greatest fans in baseball.

Said Van Wagnen: "Robinson Cano is one of the best second basemen in the history of the game. He immediately will impact the middle of our lineup and increase the run production in a meaningful and significant way."

"To the Mets fans, we came here to win, try to reach the World Series and get the ring," Diaz said.

"He will be the anchor of our bullpen, and he will electrify our fan base," the Mets general manager said.