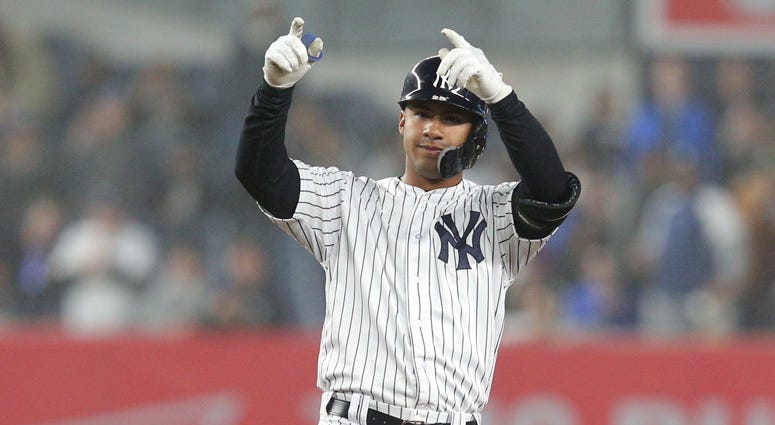 Alex Rodriguez is highly impressed with the Yankees so far.

Talking to WFAN's Mike Francesa on Tuesday, A-Rod offered up his opinion of several Bronx Bombers on Tuesday.

The three-time MVP and ESPN analyst compared rookie second baseman Gleyber Torres to Roberto Alomar. Rodriguez said 21-year-old Torres is "the young, young guy, but he has the maturity of a 30-year-old."

"He looks and feels like he's been there for 10 years, and that's rare to say," Rodriguez said. "But I think defensively, it's a great match for this team. This team needs defense. Defense has been the one part of the game that's been very bad for the Yankees, and he really is an injection of good energy for them."

Meanwhile, Aaron Judge is hitting .317 with seven home runs. A-Rod said he thinks the slugger has benefited from the addition of Giancarlo Stanton and others.

"He's just kind of gone right under the radar," Rodriguez said. "He's hitting second. And he's getting better each and every day."

Rodriguez also said he's been amazed by Didi Gregorius, his former teammate who is batting .327 with 10 homers and 30 RBIs this season.

"Give (general manager) Brian Cashman a lot of credit," A-Rod said. "He coveted Didi years before he actually bagged the elephant. And what I like about Didi is here's a guy that fell flat on his face ... the first month (with the Yankees). I was really nervous for him. When I would go out and work with him, he could not stay on his feet. He would fall on his face, he wasn't hitting, he couldn't catch a groundball, and I said, 'Oh, boy!' And today, he's emerged -- he's playing as the MVP, potential triple crown winner. ... The reason why I like Didi is the combination of power, contact, Gold Glove-defender abilities."

MORE: Keidel: Panic Time Is Over, The Yankees Are Legit Good

This season hasn't been as kind to Stanton thus far, but A-Rod said it's only a matter of time before last year's National League MVP breaks through.

"I think he's going to do very well for two reasons: No. 1, you're in the middle of probably the best offense in baseball, an offensive juggernaut. Your best hitter is hitting fifth in Gary Sanchez, so hitting is contagious," Rodriguez said. "And No. 2, you're playing in a bandbox in Yankee Stadium that has yielded the most home runs since 2015. He's just too strong. It won't hold him down."