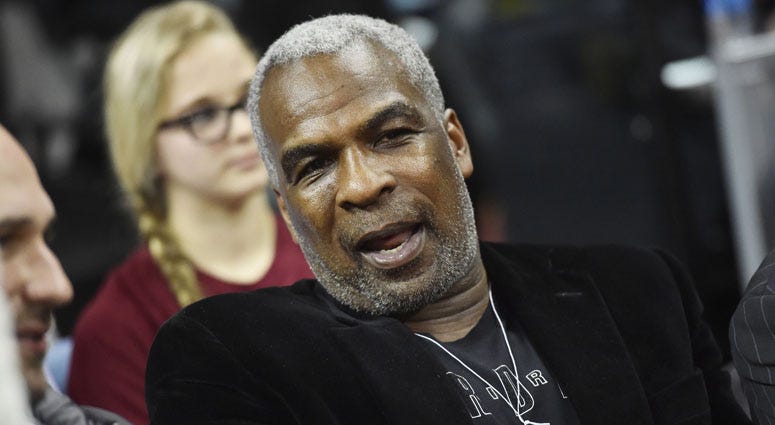 Security video shows that Knicks owner James Dolan ordered Charles Oakley's removal from a game at Madison Square Garden last year and then gave a thumbs-up after the now-infamous melee between the Knicks great and arena security, Oakley's attorney argues in court papers.

In the video from the Feb. 8, 2017, game, Dolan is seen to speaking to a security official, who then briefly approached Oakley without incident. Later, Dolan is seen looking back toward Oakley, who was seated just a few feet away in the row behind the owner, and then giving a signal just before a team of security officials arrived to escort Oakley out.

Of course, the confrontation turned ugly when Oakley resisted and shoved security guards before they forcibly removed him. Oakley was arrested, but he accepted a deal with prosecutors in August that eventually dismissed the misdemeanor assault and trespass charges against him.

Immediately after the incident, the Knicks alleged Oakley was removed from the arena because of his "abusive behavior." Oakley, however, has consistently denied those allegations.

"Mr. Oakley can be seen laughing and casually interacting with fans," his attorney, Douglas Wigdor, says in the court filings. "Nowhere is there evidence that he was acting as belligerently as (Dolan and MSG) falsely claim."

The newly surfaced video, obtained and first reported on by the New York Daily News, was introduced as evidence in Oakley's lawsuit, filed in Manhattan Federal Court, alleging he was a victim of assault, battery, false imprisonment and slander. The suit names Dolan, MSG Networks, The Madison Square Garden Company and MSG Sports & Entertainment as defendants.

The lawsuit attempts to paint the picture of Dolan harboring a strong hatred of Oakley for years, feelings that came to a head Feb. 8.

Soooooo Charles Oakley just got into a fight at he Knicks game. pic.twitter.com/klZBD89VI7

MORE: Schmeelk: The Death Of The Center And What It Means For The Knicks

Oakley also accuses Dolan and MSG of maliciously making false statements that the popular ex-Knick was engaged in abusive behavior toward fans and staff during the game and that he might have a problem with alcoholism.

Oakley played for the Knicks from 1988 until 1998, helping them reach the 1994 NBA Finals alongside Patrick Ewing, John Starks, the late Anthony Mason and head coach Pat Riley. But he has a poor relationship with the team because of his criticisms of Dolan.

“Today’s claims are nothing more than Oakley’s latest attempt to distract from the real reasons why he was ejected. We like the videos – they show what actually happened, which is why Oakley’s lawyer continues to fight to exclude them from the court case. As opposed to the edited and manipulated video posted by Oakley’s counsel, we filed the entire unedited video with the Court months ago.  As we’ve stated before, we believe this suit has no merit and should be dismissed.”