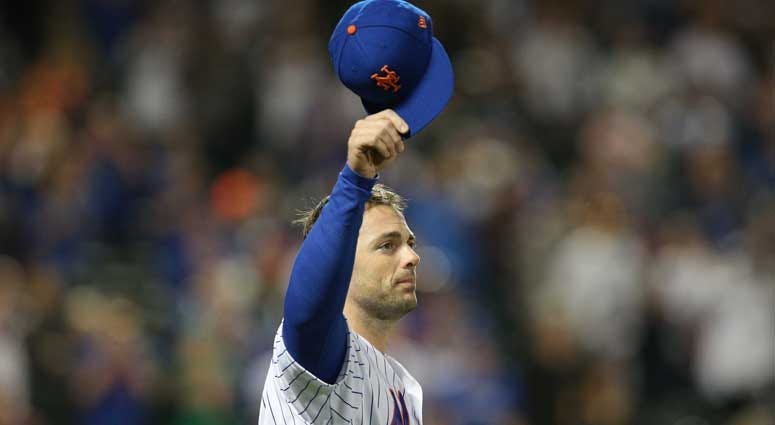 Much like the last few years of his truncated career, David Wright's finale was no fairytale at the plate.

Adoration, appreciation, respect. Those were the tokens he took home.

Wright left to a long standing ovation before a sellout crowd at Citi Field in his farewell game for the New York Mets on Saturday night.

The team captain went 0-for-1 with a walk against the Miami Marlins during New York's 1-0 victory in 13 innings. He was removed after two plate appearances as planned, and on defense he handled a one-hopper to third base with no problem.

Wright joined teammates as they ran onto the field to swarm Austin Jackson, who hit the game-winning double, and then watched as the Mets played a postgame tribute on the ballpark video board. After that, Wright addressed the crowd in a postgame speech that lasted about 2 minutes, 20 seconds.

MORE: David Wright To Mets Fans: 'I Don't Think "Thank You" Cuts It'

Wright, who fouled out to first base his final time up, took his position before the top of the fifth inning. Mets manager Mickey Callaway then came out of the dugout to make a lineup change, and Wright began his slow walk off the field.

As fans chanted his name and cheered for about 3 minutes, 15 seconds, Wright saluted them by touching the bill of his cap and patting his chest repeatedly. He went down the line and hugged all his teammates just in front of the Mets' dugout, with Marlins players standing and applauding from across the field.

With watery eyes, Wright took a bow, blew a kiss to the crowd of 43,928 and came out of the dugout for a curtain call before heading up the runway toward the Mets' clubhouse, followed by several teammates.

Once he was out of sight, fans chanted "Thank you, David!"

After heading up to the television and radio booths for interviews, Wright was back on the bench.

His stellar career cut short by neck, back and shoulder injuries that required surgery, the 35-year-old Wright completed an arduous comeback by returning to the majors this week for the first time since May 27, 2016. Unable to fully overcome his physical setbacks, he said he expects Saturday to be his last major league appearance even though his contract runs through 2020.

Wright was reinstated from the disabled list Tuesday and finally made it back into a big league game Friday night as a pinch-hitter. He grounded out on the only pitch he saw in his first plate appearance in nearly 2½ years, then batted third in a ceremonial start Saturday that was in the works for weeks.

With family and friends on hand, the seven-time All-Star crouched behind home plate to scoop up an honorary first ball tossed by the oldest of his two daughters, 2-year-old Olivia, who wore a Lil Wright jersey with his No. 5 on the back.

Highlights of Wright's career played on the ballpark video board just before the first pitch. He bounded out to third base alone, followed by longtime teammate and buddy Jose Reyes, who started alongside Wright at shortstop for the first time since Sept. 28, 2011.

The pair embraced several times on the field and soaked in applause during their 878th start together, most by any two players in team history, according to the Elias Sports Bureau.

Tugging at heartstrings all night, the Mets accompanied a video montage of Wright's finale with music from "The Natural" a few innings later.

Reyes doubled leading off the first and reached third on Jeff McNeil's sacrifice bunt, setting up an RBI opportunity for Wright. With the Marlins playing their infield in, Wright fouled off a 91 mph fastball and drew a full-count walk from rookie Trevor Richards.

Wright was immediately erased on a double play. He fouled out on the second pitch he saw leading off the fourth, with first baseman Peter O'Brien making a not-so-easy catch near the retaining wall that turned him into the target of loud boos all night.

Still grinning a bit, a disappointed Wright walked slowly back to the dugout.

SNY, the television home of the Mets, programmed Wright highlights, interviews and features that ran all day beginning at 10 a.m.

Even the crosstown rival Yankees took out a full-page ad Friday in the New York Post congratulating Wright on "a distinguished career."

The Citi Field gates opened early at 4:30 p.m. so fans could watch Wright and the Mets take batting practice. The star of the show knocked a few balls over the fence, waved to the crowd and signed autographs.

The club's career leader in hits, RBIs, runs and several other categories, Wright was drafted by the Mets and has spent his entire career with them. For years he's been the face of the franchise - and sometimes its most visible spokesman - for a team that often sorely needed the positive image he always portrayed.

If there's ever been a Mr. Met without the big head, David Wright is it.

"His grind just to get back to this spot has been unbelievable - and most people wouldn't do it," Callaway said. "We're doing something special for David not because of the numbers he put up, but because of the person he is."

Former teammates Michael Cuddyer and Cliff Floyd, two of Wright's best friends in baseball, came out for the festivities.

Over in the opposing dugout was this neat full-circle connection: Marlins catching coach Brian Schneider was behind the plate with the Montreal Expos for Wright's first at-bat on July 21, 2004, and recalled tumbling head over heels at the dugout railing to make an acrobatic grab of Wright's foul popup.

Asked if he would instruct Richards to groove a pitch to Wright, Marlins manager Don Mattingly cracked: "That young kid of ours? He may groove one by mistake. He won't try to groove one."

Jackson doubled home Michael Conforto with the winning run on the first pitch from reliever Javy Guerra. Conforto singled off Jarlin Garcia (3-3) to start the 13th and advanced when Jack Reinheimer walked.

Mets: The crowd groaned when OF Brandon Nimmo grabbed his right hamstring after rounding first base on a leadoff single in the seventh. In obvious pain, Nimmo was removed from the game.

Marlins: All-Star catcher J.T. Realmuto will manage the team in its season finale Sunday, according to Mattingly. Rookie RHP Sandy Alcantara (2-2, 4.00) gets the start.