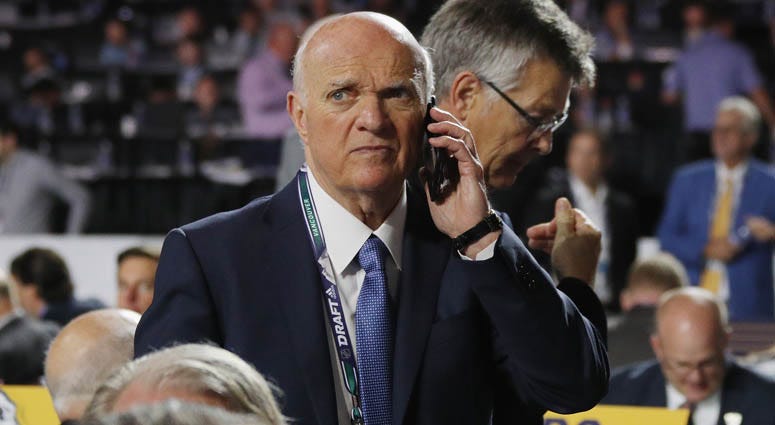 Lou Lamoriello has not wasted much time stamping his mark on the New York Islanders since being named President of hockey operations. Having relieved Garth Snow of general manager duties, assuming the role, and head coach Doug Weight, he made his first hire of his tenure.

Bringing in Steve Pellegrini, whom he has known since his days with the New Jersey Devils, is a master stroke. Pellegrini is known as a master at contract negotiation and salary cap navigation to the point he put Claude Loiselle out of a job.

It seems pretty clear the only member of the Weight coaching staff that stands a chance to keep their job is Scott Gomez due to his relationship with the new boss, who is not the same as the old boss. Islanders fans certainly don’t have to worry about being fooled again. Anyone with ties to the Snow regime seems on thin ice. Even video coach Matt Bertani wasn’t able to escape the regime change.

With next week’s NHL entry draft fast approaching, the Islanders hold the 11th and 12th picks of the first round. With plenty of teams looking to move into the round with additional picks, there will be a plethora of options to start patching up a roster requiring fixes. The Islanders have the biggest pending free agent on the market sitting in front of them, only four signed defensemen and one goaltender with legitimate NHL experience.

First and foremost, my odds on Tavares signing with the Islanders is now at 70% with the pending hire of a new head coach sure to be a factor. That 30% is enough to make fans nervous, and it should, as it’s certainly not close enough to zero. He would be silly to not go to the listening period, happening the week before free agency begins on July 1. And there will be plenty to hear.

Vegas will be involved, as they look to build on their historic momentum. Toronto will try everything in their power to strip Lamoriello’s best player from under his fingertips (although it would take a ton of cap maneuvering). Expect the Blues and Canadiens to talk to agent Pat Brisson, and the New Jersey Devils want to be big players in free agency this summer, with plenty of money to make a huge offer to stay in the area.

If the Islanders lose him, let’s hope Lamoriello has worked out some type of deal where he can sign him to an eight-year contract, then trade him to the team he chooses, getting back some type of compensation. If he does sign, expect something in the range of $11.5-$12 million per season. Anything less, with these comparables and the cap rising, would be a bargain.

On defense, I don’t expect them to be huge players in a weak market. John Carlson, fresh off the heels of a career-season and a Stanley Cup, just saw Oliver Ekman-Larsson get eight million reasons to be happy entering the free agency period. The Islanders shouldn’t be players in that bidding war.

They could go the safe route, lock up Calvin de Haan and pray Devon Toews recovers and plays a significant role in training camp and beyond, along with Sebastian Aho. Some rumblings have Jack Johnson looking for five to six million per. Really?

In goal, it’s anyone’s guess. Could they talk Jaroslav Halak into taking a discount on what could be the last contract of his career to come back under a much less snowy scenario? Philipp Grubauer was put on the market today by the champions, but the 26-year old German has never played more than 35 games in a season, and he just did that this prior year. It would be like the Thomas Greiss situation, when New York signed him from Pittsburgh in hopes he could be a starter.

They could dip into the veteran market and call Lou’s old cronies in New Jersey to see what the Devils want for 32-year old Cory Schneider, with his 370 career games and .920 career save percentage in his back pocket.

Whichever way Lou decides to go, it won’t be dull, that’s for sure. The Islanders have a head coach to hire, plenty of assets to deal and holes to fill. Most importantly, they have a new president and general manager with an itchy trigger finger looking to get this team back on the road to sustainable success.