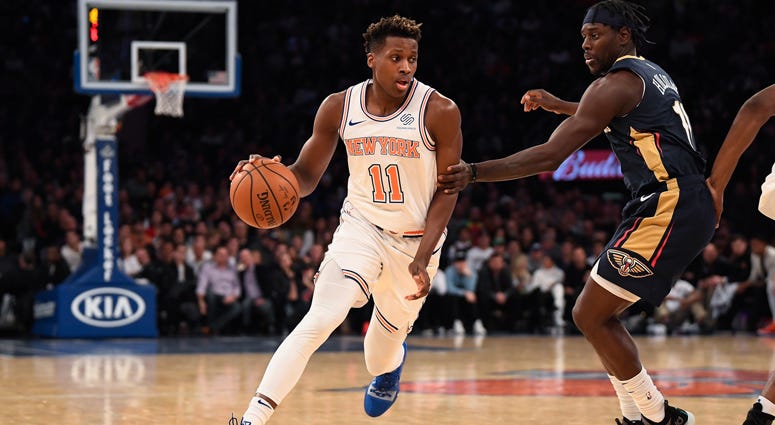 I’m not sure if you’re sicker of reading this or I’m sicker of writing it. It's probably the former. This will be the last time I will complain about David Fizdale and how he is handling the development of Frank Ntilikina. I will drop the subject, but for the last time, I need to explore all the levels of this to get it out of my system. Ntilikina has not played a single minute of basketball in the team’s last two games. The Knicks are doing this wrong, but they still have time to change course before real harm is done.

Before delving into the details of actual player development, the financials here are just as important. The Knicks control the rights to Ntilikina, Damyean Dotson, Kevin Knox and Mitchell Robinson beyond this season on low-cost rookie contracts. Players on expiring contracts such as Emmanuel Mudiay, Trey Burke, Marion Hezonja and Noah Vonleh are all unlikely to return next year because the team is saving its cap space to land an impact max-level player in free agency in either 2019 or 2020.

Right now the Knicks are right at the cusp of affording a maximum salaried player this summer and are still short for an older player like Kevin Durant. Using that space on anyone over the next two offseasons would eliminate the team’s ability to get a max free agent in any of the next two summers. Mudiay has a $12 million cap hold the Knicks must reserve from their available space if they want to go over the cap to sign him. It is almost impossible for him to be the team’s point guard of the future even if they wanted him to be.

It is similarly problematic to bring back anyone else on an expiring contract. Stars win in the NBA. If the Knicks use their cap space, an incredibly valuable asset, on a bunch of future roleplayers such as Mudiay, Burke, Hezonja and Vonleh, they will be stuck in mediocrity forever. Those guys are in a completely different category than the team’s previous draft picks. Whether a fan thinks Ntilikina has a bright future or not, his contract status alone dictates he should be on the floor.

Fans should also be disabused of the notion that Mudiay or Burke will bring back anything of value in a trade and this is some kind of master plan to showcase them in order to raise their trade value. Both guys are on expiring contracts and have serious deficiencies that are unlikely to improve. Mudiay still has a hitch in his shot and struggles defensively, and Burke’s size will prevent him from ever becoming a good defender. A second-round pick would be the best return possible in even the most optimistic situation. (Remember the Knicks can’t take back any salary in any deal).

In terms of player development, the Knicks have handled Ntilikina differently than they have any of their other controllable young players. Aside from Dotson’s inexplicable four consecutive DNPs a couple of weeks ago (which look even more confounding given how well he has played since returning), Fizdale has let his young players play through their struggles. Neither Knox nor Robinson have had any games when they didn’t play simply because of a coach’s decision.

Ntilikina has not been afforded the same luxury, and it is hard to figure out why. He has been benched for two straight games, even with Burke unavailable due to his knee injury. Fizdale preferred to play Allonzo Trier out of position rather than give Ntilikina minutes as the team’s point guard for even a few minutes.

It isn’t much different, however, than how much Knox has struggled this season. He is shooting just 33.8/32.8/66.7 and struggles as a defender and facilitator far more than Ntilikina does. Despite that, Knox never lost his time in the rotation, so why has Ntilikina? Even if Ntilikina’s minutes return soon -- and it's hard to imagine they won’t -- what role they put him in is equally important.

Ntilikina’s best stretch of games this year came when he was the Knicks' starting point guard. The starting lineup featuring Tim Hardaway Jr., Dotson, Voneh and Robinson is still the team’s best commonly used one this season with a net rating of 8.1 in 94 minutes. He was more forceful with the ball, including the only two games this season when he has attempted more than 10 shots. The offense wasn’t explosive, but it wasn’t messy, either. His size and length gives him an advantage against other point guards but is fairly typical on the wing.

Since Fizdale has gone away from that lineup, he has primarily played Ntilikina off the ball (and bench) with ball-dominant players such as Burke and Trier. With Fizdale running very little else besides high-screen-and-rolls and isolations, Ntilikina has been relegated to standing in the corner to spread the floor. If he comes out to get the ball, he gets in the way and blows up the set. If it is true Fizdale is unhappy with Ntilikina because of his lack of aggression, putting him in this passive offensive role doesn’t make much sense.

Ntilikina comes from a different basketball world from Knox, who was a ball-dominant star growing up and playing on the AAU circuit and was expected to be the alpha. Ntilikina was a roleplayer off the bench as an 18-year-old playing with a bunch of grown men in France’s professional league. Except when playing with France’s under-18 national team, he was always one of the younger guys who wasn’t asked to go out there and dominate the ball.

He sees basketball the way European players do, not the way American players do. His DNA tells him to fit into a team concept with his first job being to set up his teammates. If Fizdale is trying to get him out of that mindset, it is unclear how playing him off the ball with ball-dominant players or not at all can help him change. Is it more likely that the solution to Ntilikina’s struggles is a mental break, or an infusion of confidence in his offensive game? It remains to be seen, but not playing is always a hard way to improve. It’s the reason Knox and Robinson continue to play despite their struggles.

It is also important to remember how valuable and unusual it is for a 20-year-old to already be a top-flight NBA defender. The Knicks give up 3.3 fewer points per 100 possessions when Ntilikina is on the floor. Last year he was one of the league’s best pick-and-roll defenders as a 19-year-old rookie. Defense matters, and his play on that end is extremeley valuable, which is why there have been reports of nearly a half-dozen teams reaching out to see if the Knicks want to trade him.

Ntilikina has talent, and anyone who refuses to admit that is either willfully ignorant or a poor evaluator of basketball players. Shooting is one of the most improvable parts of an NBA player’s game, and it's Ntilikina’s greatest weakness. Even if he never becomes a playmaking point guard, which is very possible, as long as he becomes a better shooter he can excel in the league as a valuable 3-and-D starter and winning player for more than a decade. He has no hitch in his shot, and it is hard to believe that given all the reports of how hard he works, that his shooting won’t come along eventually.

In other words, even a more pessimistic view of his future could wind up with him as a starting-caliber player in the league. Heat forward Justise Winslow, who has had similar offensive issues to Ntilikina, was signed to a three-year, $13 million extension earlier this season by Pat Riley. Like Ntilikina, he has a real chance to turn into a two-way player, and Riley values defensive skills as much as he does scoring.

All this consternation could end up being foolish. Maybe relegating Ntilikina to the bench and to an off-ball role is simply part of some kind of master development plan by Fizdale and player development guru Craig Robinson. It might work. The season is long, and there is plenty of time to get this thing right. But the clock is ticking, and every minute Ntilikina watches from the bench is another minute he isn’t learning with the basketball in his hands while going against the best players in the world.

This season was never about winning. It was about player development to help the Knicks' future. Ntilikina is part of that future. He needs minutes at point guard, and that should start Thursday night at Boston.

You can follow me on Twitter for everything on Knicks, Giants and the world of sports @Schmeelk.​