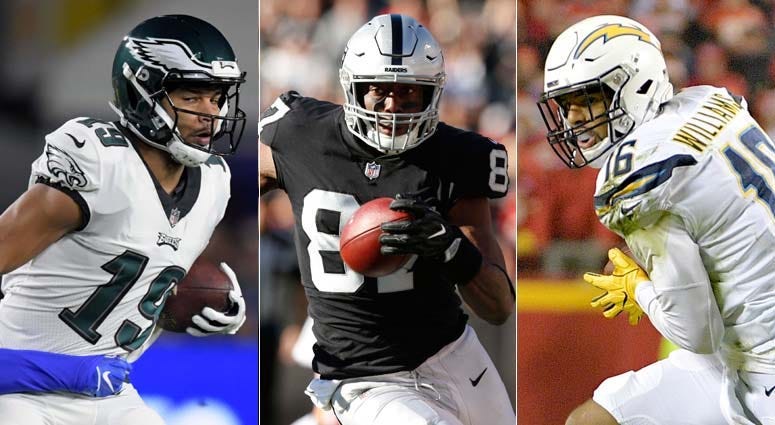 In the days leading up to the start of NFL free agency, I will be breaking down the top free agents at each position, and whether or not they potentially fit in the Giants’ and Jets’ offseason plans.

We started with the quarterbacks, then we tackled the running backs. Now we’re on to the pass-catchers.

This year’s class of free agent wide receivers and tight ends is rather weak. The most talented player available is Steelers wideout Antonio Brown, but according to reports out of Pittsburgh, a team will have to give up a considerable amount of assets in order to acquire him in a trade.

The Giants currently have Odell Beckham Jr., Sterling Shepard and Evan Engram as pass-catchers, not to mention the team’s second tight end, Rhett Ellison. However, Big Blue has essentially zero depth at wide receiver, so you better believe general manager Dave Gettleman will look to add some receivers, either in free agency or the draft.

The Jets will also be in the market for some pass-catchers this offseason. Two of Gang Green’s top three receivers from 2018 -- Robby Anderson and Jermaine Kearse -- are set to become free agents, meaning New York will definitely be pursuing some wideouts to pair with Quincy Enunwa. (Anderson is a restricted free agent, and the Jets have placed a second-round tender on him.) The Jets are in better shape at tight end, though, as rookie Chris Herndon looked impressive in his first season.

Let’s get into it.

Tate is the most consistent pass-catcher available in this year’s free agent class. The nine-year veteran receiver has caught at least 90 passes in four of his past five seasons, while going over 1,000 yards in three of those five. He finished with 74 receptions for 795 yards and four touchdowns in 2018, but keep in mind he was traded from the Lions to the Eagles in the middle of October…

Tate’s age is starting to slowly creep up, as the former second-round pick will turn 31 in August. Despite being on the wrong side of 30, Tate would still bring to an offense a high football IQ and some of the league’s best after-the-catch elusiveness, not to mention veteran leadership in the locker room.

Possible Giants interest: Tate’s style of play is too similar to that of Shepard, plus he will likely command a whole lot more than the Giants are willing to pay a wide receiver this offseason.

Possible Jets interest: Of all the wide receivers available in free agency, Tate is my favorite fit for the Jets. His ability to improvise when the quarterback is scrambling would be tremendous with Sam Darnold, who showed his ability to extend plays toward the end of the season. The Jets have the cap space to outbid other teams and should seriously consider using some of it to sign the veteran wideout once free agency begins.

Cook will turn 32 in April, but Father Time has not been able to find the 10-year veteran. Cook put together his strongest campaign this past season, catching 68 passes on 101 targets for 896 yards and six touchdowns for the Raiders.

While Cook has been unable to show any sort of consistency throughout his career, he is the clear-cut top tight end available in free agency this year. The 6-foot-5 tight end ranked fifth in catches, fourth in yards and fourth in touchdowns among tight ends in 2018, leading to his first career Pro Bowl appearance.

While consistency has not been his strong suit, Cook’s athleticism and ability to remain on the field (has played all 16 games in seven of his 10 NFL seasons) make him a solid signing for a team looking to win now.

Possible Giants interest: Between the lack of cap space and the presence of Engram and Ellison on the roster, there is no chance Cook ends up with Big Blue.

Possible Jets interest: New head coach Adam Gase was quoted as calling Herndon a “unicorn type of player,” so signing a new No. 1 tight end does not appear to be in the cards for the Jets this offseason.

Williams will be one of the more interesting free agents to follow this offseason. The 27-year-old has just four years of NFL experience under his belt, and over the last three seasons has been able to stay on the field for every game. Williams caught 41 of 65 targets for 653 yards and five touchdowns this past season for the Chargers, averaging 15.9 yards per catch, good for 10th in the league.

Williams has been one of the NFL’s best deep threats since signing as an undrafted free agent in 2015. The 6-foot-4 receiver has caught a 75-yard touchdown pass in three of his four seasons and is averaging 16.3 yards per catch for his career. While his 2018 numbers are far from jaw-dropping, Williams was serving as the third option in the passing game behind Keenan Allen and Mike Williams.

When given the chance to be the Chargers’ No. 1 receiver in 2016 (following an injury to Allen), Williams went on to lead the team with 69 receptions for 1,059 yards. Considering the relatively limited options for tall, outside receivers this offseason, it will be intriguing to see how much money Williams commands on the open market.

Possible Giants interest: Williams would be a perfect match to line up outside opposite OBJ. If opposing defenses were to double-team Beckham in the middle of the field, Williams would have little trouble beating them deep. I would love to see this signing happen, but with such little cap space to work with this offseason, Gettleman is more likely to look at the bargain free agents to fill this hole.

Possible Jets interest: If the Jets lose Anderson in free agency, I could see Williams as a realistic signing. He would immediately replace Anderson as the deep threat in the offense, as the deep ball is not a particularly strong area for Enunwa. Williams would help take the top off opposing defenses, which in turn would open up the rest of the field for everyone else. We’ll have to see what happens with Anderson first, but Williams makes sense with the Jets.

While James hasn’t blown the doors off of defenses during his four-year career, he has proven to be a consistently solid tight end. Appearing in all 16 games in each of the last three seasons, James has averaged 37.3 catches for 377.7 yards and 2.7 touchdowns. Keep in mind, opportunities were limited for him sharing an offense with phenomenal talents such as Antonio Brown, Le’Veon Bell, JuJu Smith-Schuster and James Conner.

While his receiving numbers may not stand out, James has shown his abilities as a pass-catcher. More importantly, the four-year veteran has shined as a blocker. Standing at 6-foot-7, James ranked as the 6th-best tight end in pass blocking last season, according to Pro Football Focus.

His lack of athleticism will cause some teams to pass on him, but James is sure to drum up some interest around the league.

Possible Giants interest: Unless the front office decides to move on from Ellison, then there is no need to bring another tight end into the fold.

Possible Jets interest: It’s no secret that the Jets are looking for playmakers on offense. While James doesn’t really fit that mold, I do believe he would be a good addition for Gang Green, as signing James would allow Herndon to run more routes. However it’s hard to see the Jets getting into a bidding war over a No. 2 tight end, and with other teams likely to be interested, this pairing probably won’t happen.

A former top-10 pick, Crabtree has failed to live up to the hype he received when entering the draft back in 2009. Over his 10-year career, Crabtree has topped 1,000 receiving yards on just two occasions (2012 and 2016), while never reaching double-digit touchdowns. Despite all of this, he can certainly still play a big role in a team’s offense.

After turning 31 at the beginning of the 2018 season, Crabtree went on to have the worst season of his career, catching 54 passes on 100 targets for 607 yards and three touchdowns with the Ravens. However, almost all of his production came with Joe Flacco under center for the Ravens. Once Lamar Jackson took over in Week 11, the veteran receiver became an afterthought in the offense, registering just 13 receptions for 135 yards and a score in the final seven games of the year.

The 6-foot-1 receiver offers interested teams a physical presence in the red zone, the importance of which cannot be overstated.

Possible Giants interest: Crabtree would be another great fit with the Giants, filling in nicely alongside Beckham and Shepard. Having Crabtree in the red zone would give Eli Manning a big, tough receiver to throw jump balls up to, the role that Brandon Marshall was supposed to serve in 2017. If Crabtree is willing to take a small, prove-it deal, then I could see Gettleman pursuing him in free agency.

Possible Jets interest: I think the Jets are dreaming bigger than Crabtree when it comes to finding a receiver in free agency. But if the front office decides to splurge on other parts of the roster, I could see the Jets having some level of interest in Crabtree at a bargain rate. The one thing that concerns me is Crabtree’s old reputation of being somewhat of a diva, which would not be the best thing for Darnold’s development. However, the diva days seem to be behind Crabtree, which could make this pairing possible.

This free agency class is filled with slot receivers, but none may be as enticing an option as Humphries. The 25-year-old hits the open market after four years with the Buccaneers, who signed him as an undrafted free agent in 2015. Humphries has been targeted at least 80 times in each of the past three seasons but put together his finest campaign this past season.

Appearing in all 16 games for Tampa Bay, the 5-foot-11 slot receiver was targeted 105 times in 2018, catching 76 of those passes for 816 yards and five touchdowns (all of which were career highs). Those numbers are even more impressive when you remember that he shared an offense with Mike Evans, Chris Godwin, O.J. Howard and Cameron Brate.

Possible Giants interest: Big Blue has Sterling Shepard manning the slot, and even if they decide to trade Shepard prior to the draft, Humphries will be out of their price range.

Possible Jets’ interest: This is another interesting option for the Jets. Darnold needs a reliable slot receiver he can lean on, and Humphries fits the bill perfectly. The Jets have four more years to compete while Darnold is still under his rookie contract, so Gang Green could use a long-term option at receiver. I’d much prefer Humphries to the Jets than someone such as Beasley, who will be 30 when the 2019 season kicks off.

Matt Citak is a web producer for WFAN Sports Radio. Check him out on Twitter at @MatthewCitak.