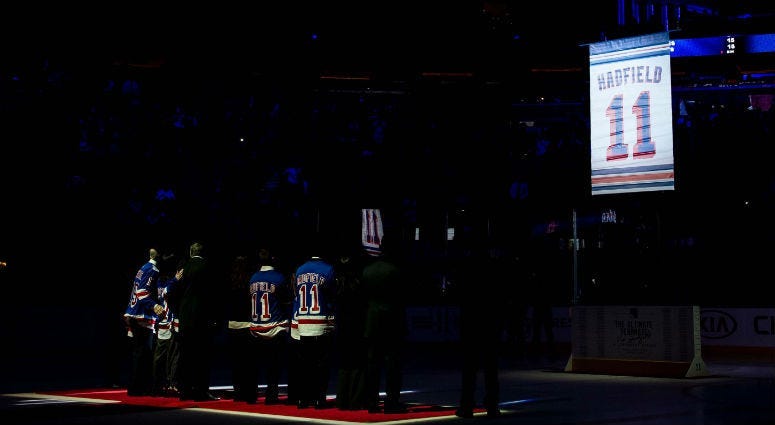 Hadfield was known for his scoring punch, leadership and pugilistic abilities. He served as Rangers’ captain from 1971 to 1974, until he was traded to the Pittsburgh Penguins during the 1974 offseason for defenseman Nick Beverley. Hadfield scored 31 goals in his first season in Pittsburgh, then followed it up with a 30-goal campaign before a knee injury forced his retirement.

At the time of his retirement, Hadfield ranked fourth in Rangers' history in goals, assists and points – trailing only Gilbert, Ratelle and fellow franchise legend Andy Bathgate. Flash forward to present day and Hadfield’s esteemed place in franchise history is displayed throughout the all-time Rangers’ leaderboard.

Hadfield currently ranks seventh overall in games played as a Ranger, fifth in goals, 10th in assists and ninth in points. Only seven Blueshirts have created more goals than Hadfield’s 226.9 according to Hockey Reference. Hadfield ranks fifth in team history in power play goals and game-winning goals.

On Sunday, with former teammates and legendary head coach Emile Francis gathered on the red carpet, Hadfield spoke of the honor of being the 10th Ranger to see his number raised to the rafters.

“I can't explain how incredible and amazing it is to stand before you and accept this tribute tonight,” Hadfield told the crowd. “This is such an honor, a privilege for any player.”

Following Hadfield’s jersey retirement, the conversation immediately turns to which Ranger will next be honored in the Garden rafters.

Brad Park’s incredible achievements in a Rangers’ uniform stand out. He finished runner-up to Bobby Orr in Norris Trophy voting four times as a Blueshirt, and runner-up for the award two times as Orr’s teammate in Boston. The Hall of Fame defenseman was a nine-time All-Star, and would have been the generational defenseman of his era had he not been lacing up the skates during an era where Orr revolutionized the position.

The fact that Park only skated in 465 games as a Ranger, compared to 501 games as a Bruin, hurts his chances of seeing his no. 2 becoming the 11th number retired by the Rangers.

There’s no doubt that Henrik Lundqvist’s no. 30 will be enshrined in the Garden rafters once he hangs up his pads. Until that day, fans will debate whether Park, or any Ranger of yesteryear, are deserving of such an honor.

Strong cases can be made for Park and “Bread Line” duo Frank Boucher’s no. 7 and Bill Cook’s no. 5. More on their achievements later…

Meanwhile, no. 4, Ron Greschner was a career Ranger for 16 seasons, a standout offensive-defenseman of his era and ranks seventh on the Rangers’ all-time points list. These aren’t easy calls to make.

It shouldn’t be forgotten that the great no. 68 Jaromir Jagr holds Ranger single-season records for goals (54) and points (123). In his three-and-a-half years at the Garden, Jagr accumulated 319 points in 277 games. The Czech legend finished runner-up to Joe Thornton in the 2005-06 Hart Trophy voting, but was voted most outstanding player that season by his fellow professionals and won the Lester B. Pearson (now renamed Ted Lindsay) Award.

Jagr also received the privilege of following Mark Messier as team captain between 2006 and 2008. But he falls into the Wayne Gretzky category – an all-time great who enjoyed a highly-productive and memorable, yet brief spell in New York. Here’s to hoping that the Pittsburgh Penguins put bitterness aside and raise Jagr’s no. 68 next to Mario Lemieux’s 66 and Michel Briere’s no. 21.

While it’s unclear if any Rangers’ player will see their number retired before Lundqvist’s no. 30, I’m of the opinion that Francis, Boucher, Cook and Lester Patrick should have their names raised to the Garden ceiling as franchise “builders.”

Francis, 92, the architect of the great Rangers’ teams of the 1960’s and 70’s, was on hand to speak glowingly of Hadfield’s career.

“You could do everything – you could fight, you could score goals, you could cause all kinds of problems,” Francis said of Hadfield. “You were a great guy, Vic. This is so well-deserved and I’m so happy for you and your family. Congratulations.”

Call it “Builders’ Night” or something along those lines to honor the legacies of Francis, Boucher, Cook and Patrick, who helped establish the Rangers as an “Original Six” force.

Patrick coached the Blueshirts to their first two Stanley Cup championships in 1928 and 1933. During Game 2 of the 1928 Stanley Cup Final, Patrick stepped off the bench and between the pipes at age 44 after Lorne Chabot suffered an eye injury. He saved 18 of 19 shots to earn an overtime victory over the Montreal Maroons. Patrick also served as general manager during the Rangers’ 1940 Stanley Cup championship.

It’s only right that the Rangers find a way to honor those whose achievements set the Blueshirts on the path of an enduring legacy as one of hockey’s most respected franchises.