Turnovers and tenacious D were the TnT for Iowa on Saturday night, as a pair of return touchdowns were the initial catalyst in the Hawkeyes’ 27-10 win over Rutgers at SHI Stadium in Piscataway on a night where the Scarlet Knights asked a sellout crowd to Scarlet Out.

“I want to thank our fans; that was a great turnout and a great atmosphere. Something to be seen in the future, just wish we could’ve performed better, but were just not quite ready to do that just yet,” head coach Greg Schiano said after the game. “It was really good to see it for sure; that’s what we aspire to build in this program, is for that to happen week after week – but we weren’t quite ready to perform up to that. They’re part of building this just like we are, and it’s a growth process for everybody.”

For most of the first half, Rutgers’ defense kept Iowa off the board…the only problem was that Rutgers’ offense couldn’t keep their defense off the board. Rutgers got the ball to start and drove down for a field goal, a drive that included a penalty on the initial try on fourth-and-8 from the 11 – and Greg Schiano decided to go for it, but after an offensive penalty put the ball right back in its original spot, Jude McAtamney kicked a 28-yarder to give the Scarlet Knights a 3-0 lead.

And that’s where the offense ended and playing defense began; on the next possession, Evan Simon’s pass on a third-and-8 was picked off and taken 45 yards to the house by Iowa’s Cooper DeJean, and three possessions (and two punts) later, Simon completed a big third down to Joshua Youngblood, who had the first down…but fumbled it away, and the fumble was returned 30 yards by Kaevon Merriweather to make it 14-3 Iowa.

“Obviously the turnovers, that was a critical part of the game. We turned it over three times and they didn’t,” Schiano said bluntly. “They’ve won 18 in a row when they don’t turn it over. Every football game writes its own story – when you turn it over twice and they score, that’s hard to overcome. We just weren’t up to the challenge tonight.” 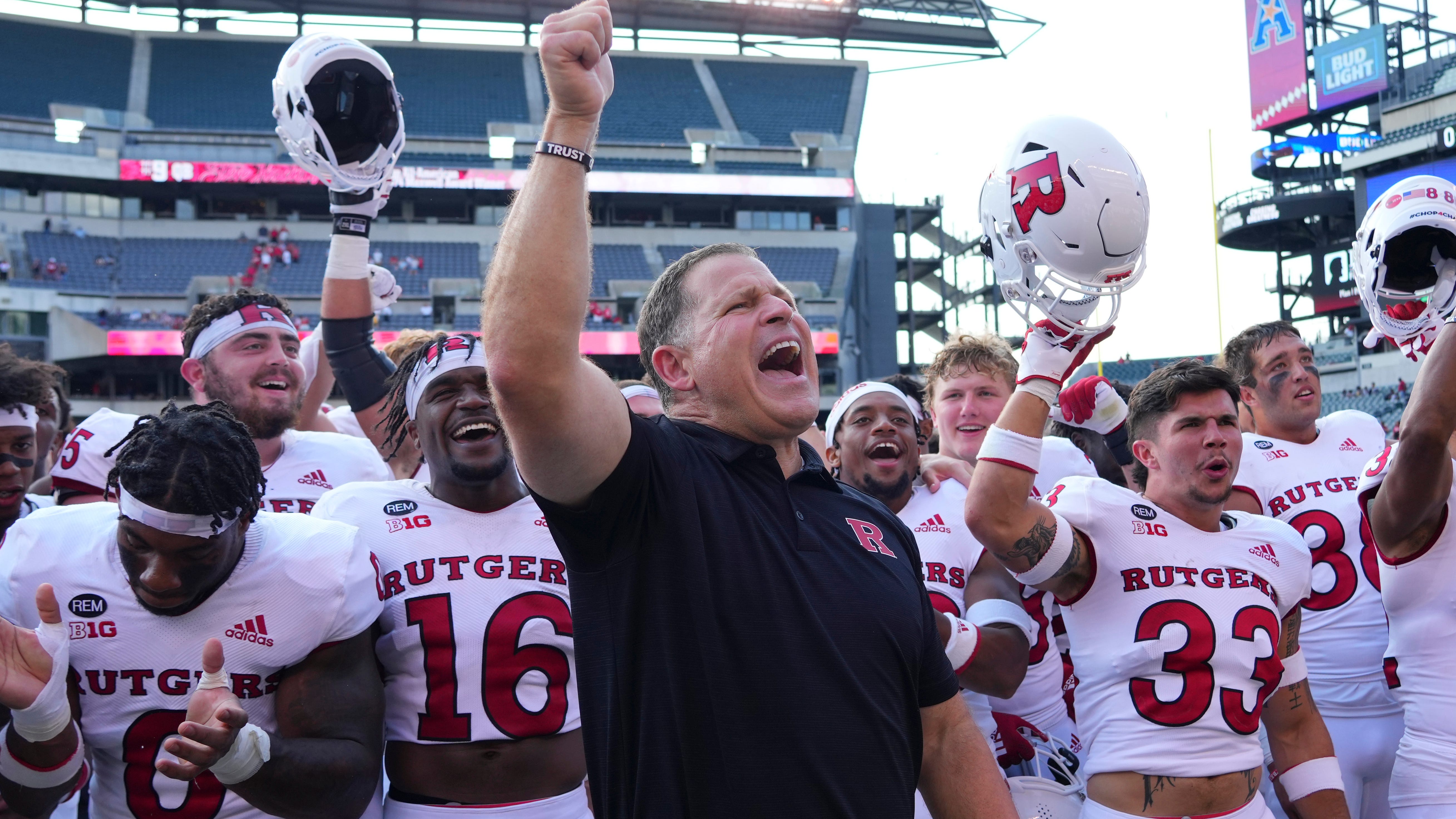 The Hawkeyes added a field goal on their next offensive possession to make it 17-3 at the half, and on the first two Rutgers possessions of the second half, Iowa got an interception inside their own 30, then held Rutgers to a turnover on downs as they failed to convert a fourth-and-four at the seven-yard line to end a 16-play drive.

“They’re an elite defense, one of the Top 5 in America over the last few years, but I thought we did some great things early – those turnovers for scores, we were actually moving the ball,” Schiano said. “There was enough going on that was good, but when you turn it over, it rewrites the story immediately.”

The one bright spot for the Knights’ offense? Aron Cruickshank beat All-American Riley Moss for an 18-yard touchdown pass on a third-and-10, hauling it in for Rutgers’ first TD pass against an FBS team since October 16, 2021.

It was the biggest of sophomore signal-caller Evan Simon’s 28 completions for 300 yards on a night where Schiano felt neither Noah Vedral nor Gavin Wimsatt was healthy enough “to be in a position where they could play effectively and win a ballgame.”

“I thought Evan did some really good things. I think Evan grew up this week, took a lot more plays than ever in practice,” Schiano said. “Unfortunately two of those turnovers really got us.” 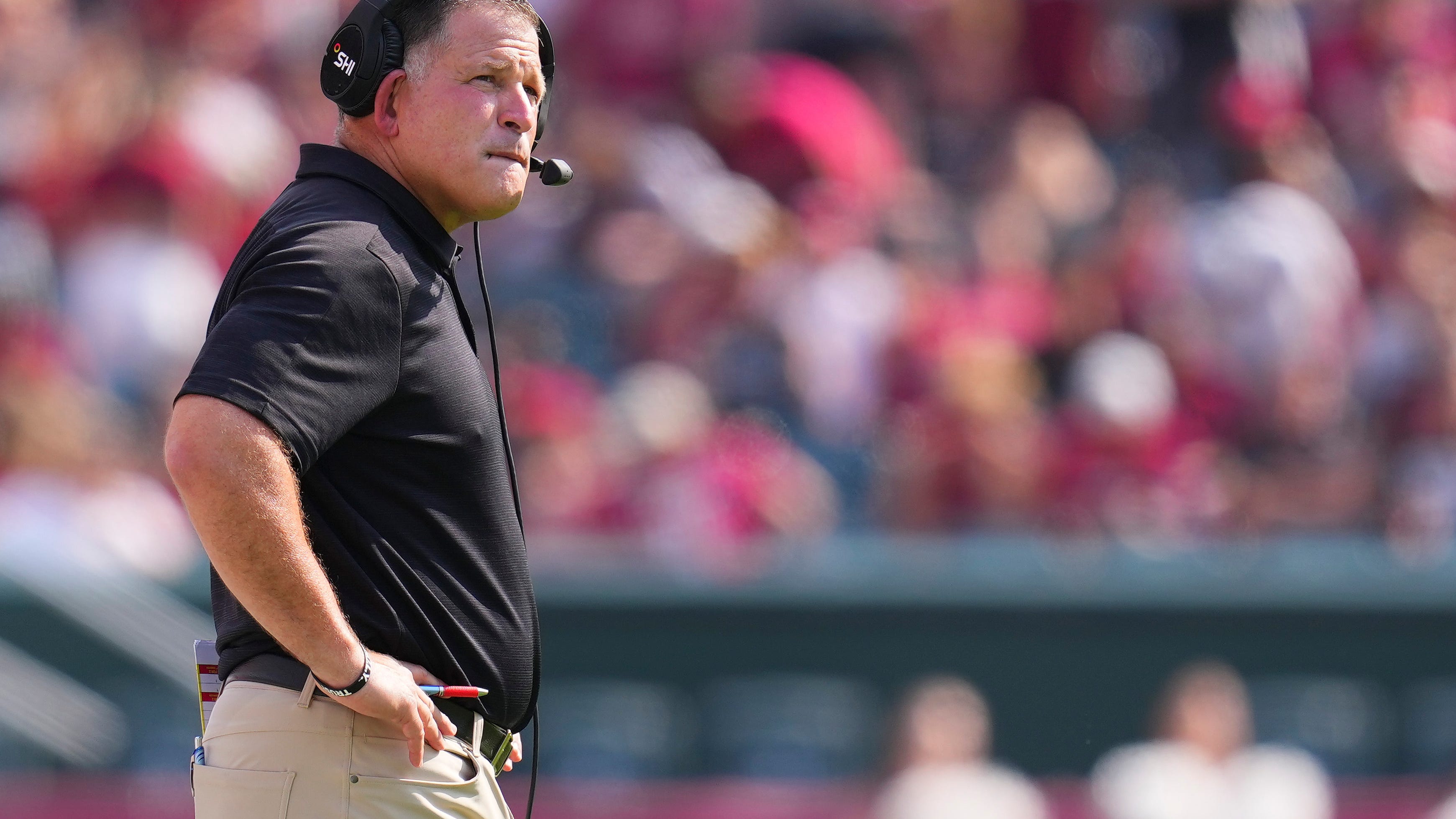 Greg Schiano now winningest head coach in Rutgers football history, but 'That's not what it's about'

Iowa responded with a five-minute drive that ended in a 51-yard field goal that went through after hitting the upright, and Rutgers’ last gasp ended up in a 4th-and-28 at the Iowa 42 with four minutes left that ended in a near-interception by Merriweather on a Hail Mary.

And so, after a late win over BC, a crushing of local FCS foe Wagner, and a hold-on victory over former Big East rival Temple, the Scarlet Knights suffer their first defeat of the season in their Big Ten opener, with No. 3 Ohio State on tap next Saturday in Columbus.

“We’re growing up,” Schiano said. “Tonight we weren’t able to quite execute every job to the point where we put it together. We’ll go back to work. We’ve got a great challenge ahead of us next week in Columbus, but we’ll get there.”