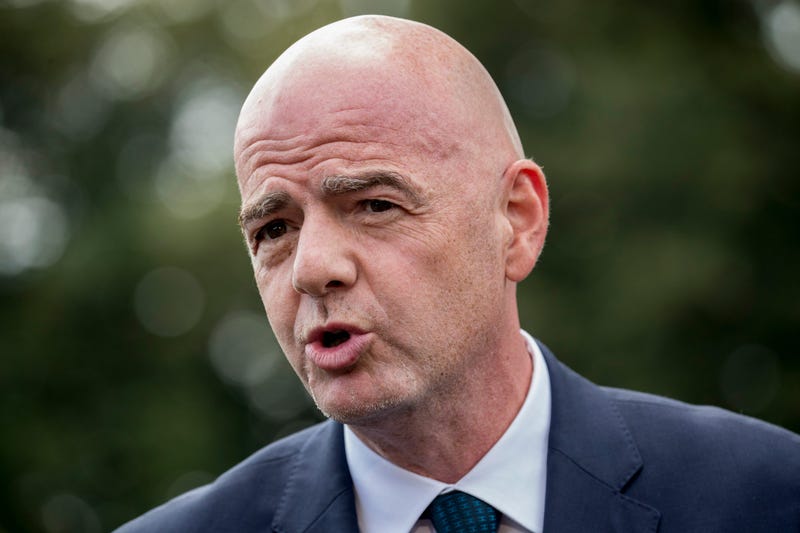 GENEVA (AP) — A criminal case against FIFA president Gianni Infantino was opened by a Swiss special prosecutor on Thursday, plunging the soccer body into a new scandal and potentially threatening the tenure of the man who was brought in to restore its tarnished reputation.

FIFA said it and Infantino will cooperate with Swiss authorities after prosecuto Stefan Keller — barely a month into the job — concluded there is enough evidence to go to court after investigating the circumstances of a meeting Infantino had with Swiss attorney general Michael Lauber.

The turmoil involving Lauber, who offered his resignation last week, centers on three meetings he had with Infantino in recent years — including one that he hadn’t disclosed and claimed no memory of — just as he was leading a sprawling investigation into soccer corruption.

Keller, a regional court judge, uncovered “elements that make up reprehensible behavior," an oversight panel monitoring federal prosecutors said in a statement. He opened a case against Infantino and regional prosecutor Rinaldo Arnold, a childhood friend of the FIFA boss, and sought authorization to open a case against Lauber.

Keller, who was named to the post of special prosecutor on June 29, found possible infractions included abuse of public office, breach of official secrecy, “assisting offenders” and “incitement to these acts,” the panel said, adding other criminal acts and proceedings could also be considered.

Under the Swiss criminal code, conviction for abuse of public office can bring penalties of up to five years in prison or other detention, while breach of official secrecy and assisting offenders can incur up to three years each. Each charge can also bring financial penalties.

Suspects in such cases benefit from a presumption of innocence in Switzerland until legal proceedings are completed.

It was unclear whether Keller believes the alleged wrongdoing was the mere fact that Lauber and Infantino had met, or if compromising information was divulged during their conversations.

FIFA said it “acknowledges” Keller's decision, and vowed it and Infantino "will, as we have always done, cooperate fully with this investigation.” It also highlighted past troubles at soccer's governing body before Infantino took office, and said meetings with prosecutors were necessary.

“As president of FIFA, it has been my aim from day one, and it remains my aim, to assist the authorities with investigating past wrongdoings at FIFA," Infantino said. “FIFA officials have met with prosecutors in other jurisdictions across the world for exactly these purposes.”

FIFA also revived a statement from Infantino on June 25, when he said: “To meet with the attorney general of Switzerland is perfectly legitimate and it’s perfectly legal. It’s no violation of anything. On the contrary, it is also part of the fiduciary duties of the president of FIFA."

At the time, Infantino also quipped: “this whole thing is quite absurd.”

In March, Lauber was found to have lied to and obstructed the oversight panel. Its probe began after reports last year said he had an undisclosed meeting with Infantino in a hotel in Bern in June 2017.

Lauber did not take notes at the meeting and both men later claimed not to recall details of their discussion.

It was their third meeting and had stayed secret when Lauber called a November 2018 news conference to acknowledge the previous two, which had been revealed in the “Football Leaks” series publishing confidential documents in the soccer industry.

Lauber and Infantino, in meetings brokered by Arnold, had previously met twice — soon after the FIFA presidential election in February 2016.

On Friday, Lauber offered to resign only minutes before a federal court upheld allegations that he lied about the third meeting — in essence rejecting his appeal of the March ruling.

“On the basis of general life experience, such a case of collective amnesia is an aberration,” the federal court ruling said.

Infantino became FIFA president in the fallout from the investigations that erupted around the soccer body in 2015. Sepp Blatter, who was the FIFA boss at the time and had already announced plans to resign in the wake of arrests of dozens of soccer officials, was banned from the sport.

Michel Platini, the favorite to succeed Blatter and then serving as UEFA president, was also suspended.

In the void, Infantino, who led the UEFA administration as general secretary, saw a route to leading FIFA. The Swiss-Italian was elected in 2016, beating Asian Football Confederation president Sheikh Salman.

The Bahraini is senior vice president of FIFA and is in line to replace Infantino temporarily if he was suspended because of the criminal case.

news
Starbucks' newest Frappuccino is inspired by a classic fairground treat and topped with real fried dough
music
Drake to be crowned 'Artist of the Decade' at the 2021 Billboard Music Awards
music
Adam Sandler reunites with IHOP employee for ‘Milkshake Monday’
music
Billie Eilish has seen your comments on her 'Vogue' photos, and it makes her wanna post less
music
The Weeknd and The Cop from The Village People is the feud we didn't see coming
music
Joshua Bassett confessed Harry Styles is 'hot' and everyone thinks it's a plot twist