The phrase "minor setback for a major comeback" is overused in the social media age, but it appears to be the mindset that Jameis Winston is heading into the 2020 season with.

Now a member of the New Orleans Saints, the former No. 1 overall pick spoke at length with Bleacher Report's Tyler Dunne in an excellent piece that's worth your time. In it, he talked about how he still has a high self worth as a quarterback, both in terms of what he can do in the future and what he's already accomplished:

"I know what I'm worth," Winston tells B/R by phone from Alabama. "And I know day in and day out, without publicly coming in and saying it, that historically I'm one of the best quarterbacks to play the game."

Historically? Well, it's is true that in 2019, Winston threw for 5,109 passing yards, the eighth highest single-season total in NFL history. The only quarterbacks to throw for more yards in a season - Peyton Manning, Tom Brady, Ben Roethlisberger and his new teammate, Drew Brees - all are future Hall of Famers. From that sense, it is pretty hard to fathom that Winston won't be a starting quarterback in 2020.

That said, nuance exists. Rules in the NFL have drastically changed over the past 15 years, and they have had intended and unintended benefits on the ability to become a prolific passer in the NFL. It would be misleading to note that Winston has thrown for more yards in an individual season than Johnny Unitas, Joe Montana and Dan Marino ever did without context because they didn't play in the same era.

Additionally, for as much success as the Tampa Bay Buccaneers had through the air in Winston's final season with the team, there's a reason it was his final season with the team. He was picked off 30 times in 2019, and 88 times in five years. The Buccaneers went just 7-9 in 2019, despite having two wide receivers that posted over 1,000 yards receiving and the No. 1 rush defense in the sport. That wasn't entirely Winston's fault, but it is fair to wonder if he had only been picked off 22 times - which still would have led the NFL - if the Buccaneers would have made the playoffs. They've inserted a soon-to-be 43-year-old Tom Brady at quarterback this offseason, among other changes, and some feel as though the team could be a Super Bowl contender in 2020.

Still, while Winston may have benefited from being coached by Bruce Arians and having a chance to throw the ball to Mike Evans and Chris Godwin, you aren't going to plug in just any quarterback and have him throw for over 5,100 yards. Winston's ceiling is playing at an MVP level, but it's fair to wonder if after five years of consistently turning the ball over if he'll ever reach his potential. 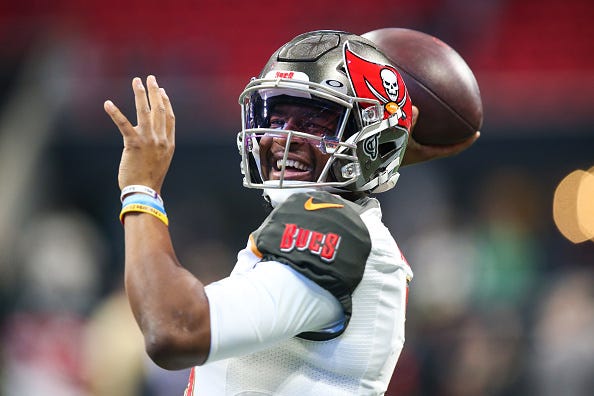 As much as he may wish he was starting in 2020, he's seemingly landed in a very good place in New Orleans. He'll sit behind Drew Brees, one of the most accomplished quarterbacks in NFL history. He'll be coached by Sean Payton, one of the best offensive minds of his generation. And if Brees goes down with an injury and Winston gets to step in, he'll have Michael Thomas, Alvin Kamara, Jared Cook and Emmanuel Sanders at his disposal. Teddy Bridgewater parlayed five starts in Brees' absence a season ago into a three-year/$63 million deal with $33 million guaranteed.

If nothing else, Winston, who turned 26 in January, will benefit from being in one of the most stable organizations in the sport for a season. There does appear to be the potential for more, though.

Maybe Winston gets to play for a few games and goes the Bridgewater route. There also are a few scenarios that involve him remaining in New Orleans for the long-run. If he gets an extended chance to play in Brees' absence, perhaps the Saints will reverse course and move forward with him as their starting quarterback in 2021 if Brees, as expected, retires after this year.

The more plausible scenario is that the Saints turn the team over to Taysom Hill in 2021, and either he proves to be better suited to be a gadget piece or gets hurt. If Winston is still with the team, he would have the chance to usurp Hill and do so for a team that has an elite head coach and arguably the best wide receiver in the sport.

Remember, Michael Vick was the Philadelphia Eagles' third-string quarterback in 2009, sitting behind Donovan McNabb and Kevin Kolb. McNabb was traded after the 2009 season, and the plan was to turn the team over to Kolb. However, Kolb got hurt in the first half of the team's Week 1 game, and Vick was so dominant when he got a chance to play that he finished second in NFL MVP voting in 2010 and earned a $100 million contract before the 2011 season. Granted, Vick and Winston have had entirely different paths to becoming backup quarterbacks, but it's not hard to draw some parallels.

To this point, Winston is not one of the greatest quarterbacks in NFL history. He is right, though, in his belief that he's likely to eventually get another chance to start in the NFL. And if he's able to eliminate or cut down drastically on his turnovers, he does have the potential to be one of this era's most successful quarterbacks.