Many of our nation's greatest athletes have devoted some parts of their lives to membership in the military. It's important not only as sports fans, but as American citizens, to remember and honor what these athletes have contributed to the safety and betterment of our country.

Here is a look at some of the players in NFL history who have served in the U.S. Armed Forces: 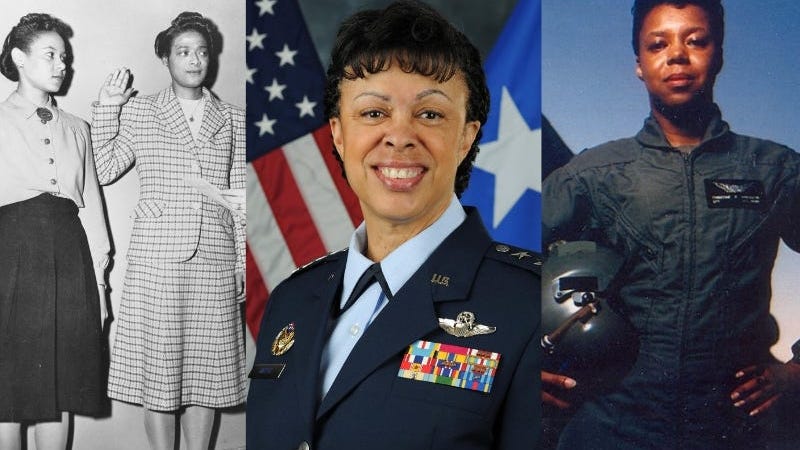 10 African American Female Service Members Who Have Made History 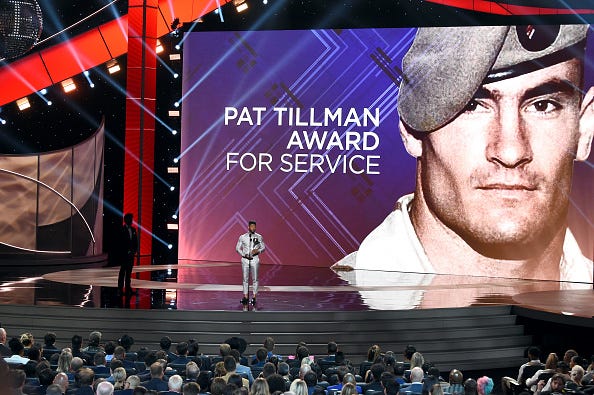 Tillman was a safety on the Arizona Cardinals from 1998-2001, but quit following the Sept. 11 terrorist attacks and enlisted in the Army Rangers. He served in Iraq and Afghanistan from 2002-2004, but was killed in combat during a friendly fire incident in Afghanistan. Tillman was awarded the Purple Heart and Silver Star, and his legacy is honored annually at the ESPY awards, where each year an individual is presented the Pat Tillman Award for Service to honor those who have served others and have a strong connection to sports. 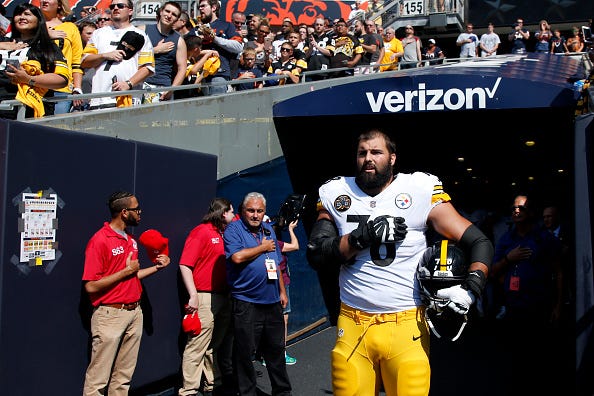 Villanueva has been an offensive tackle for the Pittsburgh Steelers since 2014. He played collegiately at Army and was deployed three times to Afghanistan while on active duty from 2010-2014 where he was awarded a Bronze Star Medal. Following his service he tried out for the Philadelphia Eagles as a defensive end. The Steelers signed him to their practice squad and switched him to offensive line, where he was able to become the first U.S. Military Academy graduate to make the Pro Bowl since Glenn Davis in 1951.

Anderson was an NFL running back on the Denver Broncos and Baltimore Ravens from 2000-2007, but before his football career he was in the United States Marine Corps. His time in the Marines actually paved the way for his NFL career. He was a member of the 11th Marines contact football team and offered the chance to play at Mt. San Jacinto Junior College. After two years, he transferred to the University of Utah and in 2000 was drafted in the sixth round by the Broncos. He was the NFL Offensive Rookie of the Year that season. 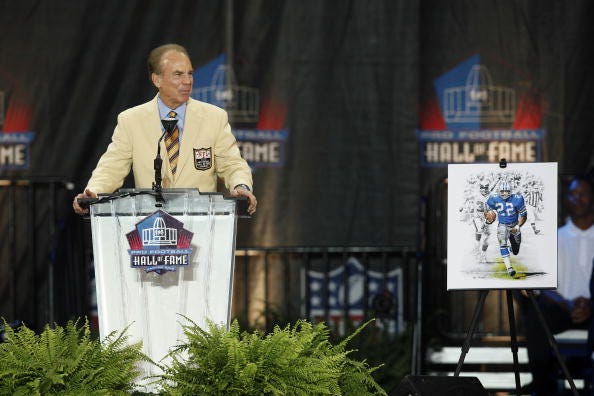 Roger Staubach is known as a two-time Super Bowl champion quarterback of the Dallas Cowboys, but he also served three years in the Navy. Staubach graduated the U.S. Naval Academy in 1965 and volunteered for a one-year tour of duty in Vietnam and was a Supply Corps office until 1967. Staubach was awarded the Presidential Medal of Freedom in 2018. 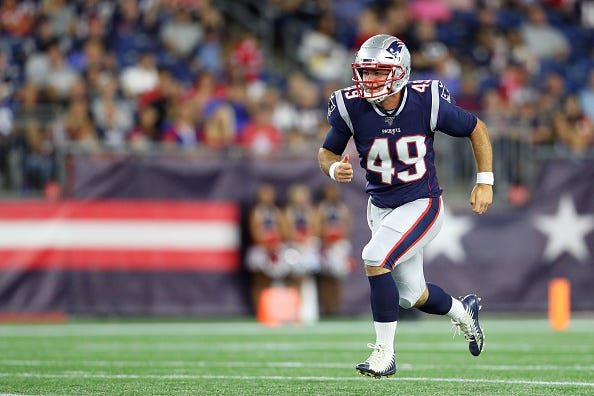 Cardona is unique as he is both the active Patriots' long snapper and a lieutenant in the Navy Reserves. The 27-year-old has balanced the two jobs by meeting the Navy's minimum requirements, which often consists of time spent at the Naval Preparatory Academy in Rhode Island. In the spring of 2018, Cardona assisted in a joint effort with the Navy in the Korean peninsula as a supply corps officer. He joins Staubach as the only two-time Super Bowl champions from Navy. 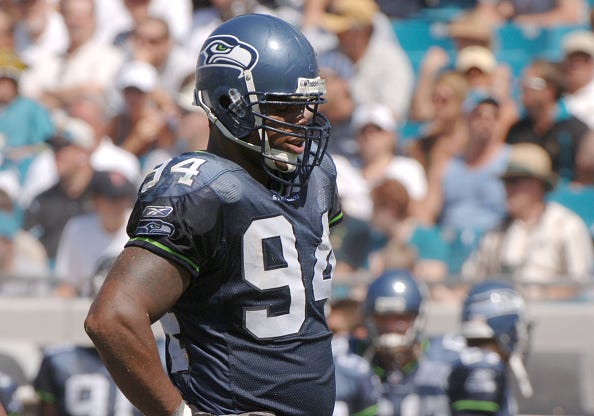 Bryce Fisher was drafted by the Buffalo Bills in 1999, but he would have to wait before taking the field. Fisher, a graduate of the Air Force Academy, served two years of active duty in the Air Force and nine more in the reserves. He rejoined the Bills in 2001 while serving in the Air National Guard during his time off. The defensive end also played for the St. Louis Rams, Seattle Seahawks and Tennessee Titans, winning a Super Bowl with the Seahawks in 2005.

Happy Birthday to Rocky Bleier a Decorated Vietnam Veteran, 4 time Super Bowl Champion. Thank you for your service and for your continued service to helping Veterans in business and as an inspiration in life. Cheers!

Robert 'Rocky' Bleier starred as a halfback at Notre Dame and was selected by the Pittsburgh Steelers in 1968. After his rookie year, he was drafted into the U.S. Army during the Vietnam War. He was wounded in combat, shot in the left thigh in an ambush on his platoon. He also lost part of his right foot after a grenade went off near him during the ambush, sending shrapnel into his lower right leg. Doctors told Bleier he would not play football again, but rejoined the Steelers in 1970 at the request of owner Art Rooney, and was playing special teams by the 1971 season. He remained on the team until he retired in 1980, serving as the secondary running back behind Franco Harris, winning four Super Bowls in his career. 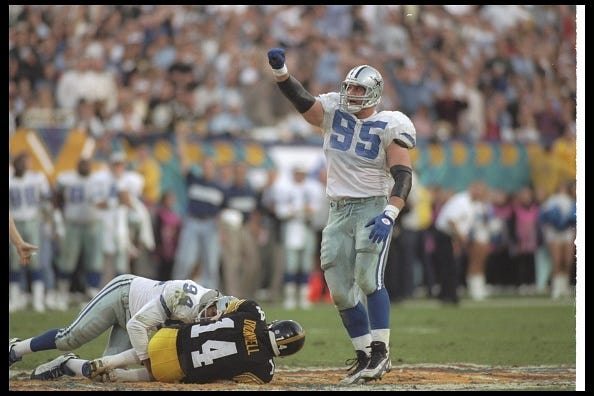 Henning was an offensive lineman for the Dallas Cowboys from 1992-2000, but also served in the U.S. Air Force. Henning graduated the U.S. Air Force Academy in 1988 and was deployed twice to the Persian Gulf in 1991. He was part of a mission which helped provide relief and humanitarian aid to Kurdish refugees in northern Iraq and twice awarded the Air Force Achievement Medal.

Chuck Bednarik was a legendary Philadelphia Eagles player from 1949-1962 where he played both offense (center) and defense (linebacker). Before his Hall of Fame career, Bednarik joined the U.S. Army Air Forces out of high school and flew on over 30 combat missions over Germany during World War II.