“I have six kids, my oldest is 18, my youngest is 4. What I’ve started to do, really over the last couple of years, is start to learn some of the stories about my background,” Tiki Barber told RADIO.COM’s John Montone when asked how he celebrates Black History Month.

All month long we’re celebrating Black History Month by speaking with activists, politicians, historians, musicians, athletes, and more about the storied history and contributions of Black individuals in America for a special RADIO.COM LIVE Check In series.

For Barber, the month began with learning about his family history. “My mom and dad divorced when I was two years old and for the longest time I didn’t have a relationship with my father,” he said. “After my seven year old was born, I reconnected with my dad. He has a whole family and there’s another side of the Barber clan that’s out in Oklahoma.”

“Learning his story was something that was really important to me cause his history is my history,” he added.

Recently, Barber had a conversation with his mother about her father. "I didn’t know my grandfather, he passed away in Vietnam in 1967," he said. "It was a helicopter accident and that’s all I really knew for the longest time. My grandfather died right before my mom turned 15 years old, but he was a great athlete [at] Virginia State University, he was a four time CIAA champion in wrestling.”

Barber then detailed how the desire to pursue education runs deep in his family, such as his mother deciding to get her master’s degree after Tiki and his twin brother Ronde Barber went back to school. “There’s always been this desire, this innate urge to excel and push forward. That’s my mom, but it’s through my grandfather who I just started to learn a little bit more about. That’s what I do in Black History Month is to learn about my history.”

Barber also touched on how his views about Colin Kaepernick kneeling for the flag have changed over time. Barber said the first time he felt patriotic hearing the national anthem was in 2001, just after 9/11. While the feelings of unity were high at the time, Barber knew it wouldn’t last. “The reality is that’s a facade. There isn’t that continuity, that consistency, that equality, that equity in this country that we like to pretend there is.”

When the conversation surrounding Kaepernick’s protests turned to being about the flag rather than about the fight for social and racial justice for African Americans, Barber said “it was easy to get confused.”

“I commended him for his protests, but I thought he was going about it the wrong way,” he exclaimed. “But over time, history tends to correct things that are viewed the wrong way. I think a few months into it I realized my reaction was going to be on the wrong side of history.”

When Montone asked him what caused that realization, Barber responded, “it was the continued issues and incidents of Black Americans being killed, murdered unjustly in circumstances where they should have been protected. I think it’s something that’s always gone on, we just have never paid attention to it. They’ve always been one day stories.”

“When the racial injustice that was happening in this country became a lot more than a one day story, that’s what made you realize, ‘you know, Kaep is right,’” Barber added. “Here we are four years later, almost five years later and it’s still a conversation that we’re having, which is a testament to his decision at the time.”

Tiki acknowledged that conversations about race and racial injustice weren’t common in the locker room while he was playing in the NFL. “The locker room talk was, 'where we going tonight, what’s the club we’re going to hit up, what music’s hot right now,' or how we were going to win the game that’s on the horizon. It wasn’t about the social issues in our country.” 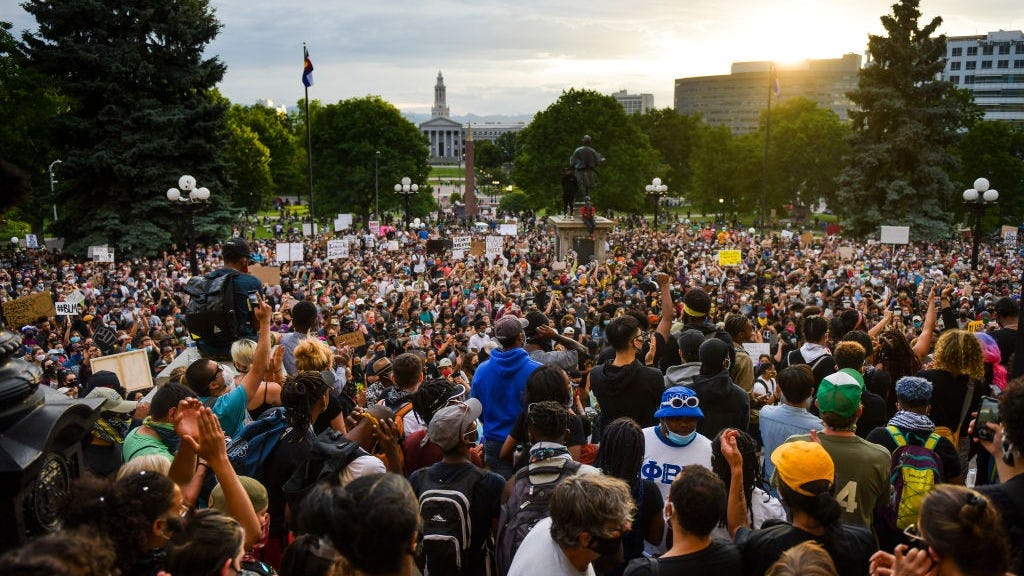 Before the end of the interview, Barber touched on why the conversations about social justice that took place following the death of George Floyd have sustained. “When this George Floyd murder happened and when Breonna Taylor followed suit, and a handful of others started to hit the national airwaves, it was the perfect storm for social unrest to kick up because our minds weren’t occupied with other things,” he said.

“Our minds were free to truly explore and not let the George Floyd issue become a one day story. It became a five day story, a month story, a year story. It never went away, it never will go away because we absorbed it all. We didn’t get distracted by LeBron James getting a triple-double in the NBA Final.”