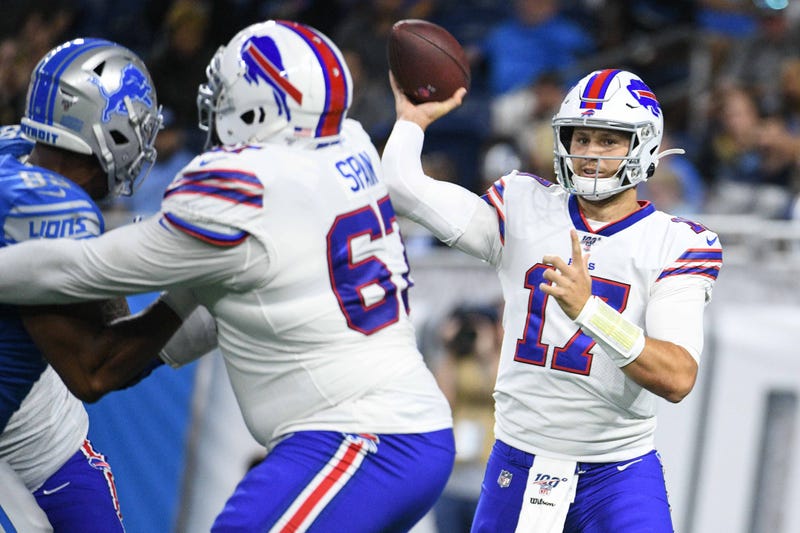 The Buffalo Bills remain unbeaten in the 2019 preseason with a 24-20 win on Friday night over the Detroit Lions at Ford Field.

The Bills' starters were plagued early with turnovers, penalties and even injuries in the opening half, with the offense having only one first down in the opening quarter, which was awarded to them by a personal foul penalty by the Lions defense. In addition, their first quarter struggles were compounded with a fumble from receiver Cole Beasley that allowed the Lions to open the scoring with a field goal.

The Bills would get the first touchdown of the game thanks to the Lions committing a personal foul on their down, capitalizing with a touchdown run from Isaiah McKenzie. The Lions would take the lead back with a Matthew Stafford touchdown pass toTy Johnson to make it a 10-7 Detroit lead. The Lions would recover a fumble on the following kickoff, but the Bills defense held strong with a fourth down stop with their backs to the goal line.

Allen and the Bills offense responded with a lengthy drive, marching 95 yards to set up Devin Singletary's nine-yard touchdown run to give the Bills the lead, which the Bills would not give back.

The Lions added a 61-yard field goal from Matt Prater to cut the lead and end the first half, 14-13.

The first half was laden with injuries for both teams. Bills ended up losing guard Quinton Spain and cornerback Tre'Davious White and they would not return. White had his leg wrapped up from a quad contusion, but was in good spirits on the sidelines. On the other hand, Spain was not as lucky:

The Lions lost starting linebacker Jarrad Davis early in the game, being carted off with a leg injury that will require an MRI to follow up with the injury, according to NFL Network's Ian Rapoport.

The Bills' starters would be done after the first half, as quarterback Josh Allen and the first-team offense exited the game for Matt Barkley and the second unit. Allen only attempted six passes, going 3-of-6 for 49 yards.

The injuries would lighten up with the reserves in the game, and the Bills' passing offense took over thanks to the arm of Barkley. Barkley was lights out, leading two scoring drives and finishing 12-of-14 for 142 yards and a touchdown to Duke Williams that put the Bills up 24-13.

The Lions would come to within striking distance of the Bills in the fourth quarter, cutting into the Bills' lead with a late touchdown, but rookie safety Jaquan Johnson would force and recover a fumble to help seal the win for the Bills, 24-20.

LoTempio Complete Stats of the Game

The Bills finish off the preseason at New Era Field on Thursday against the Minnesota Vikings at 7 p.m. You can hear the call of the game right here on WGR with John Murphy, Eric Wood and Sal Capaccio.