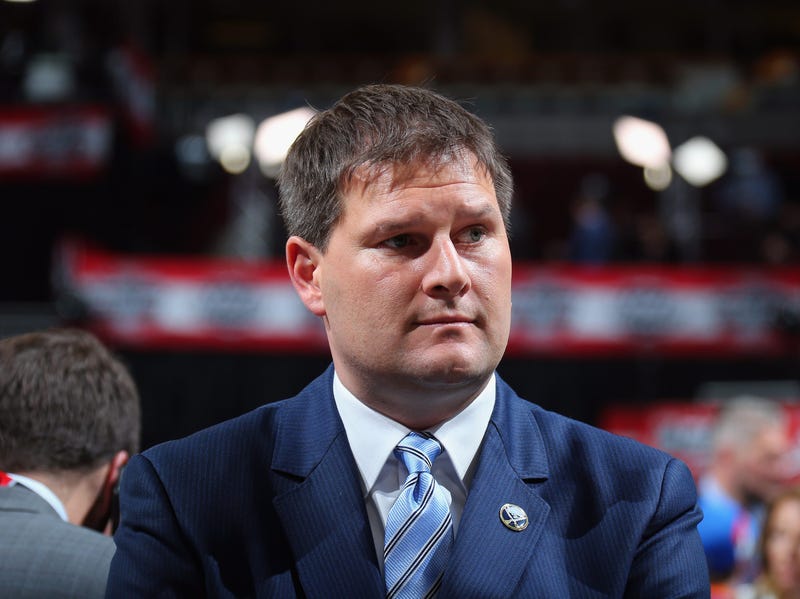 The Buffalo Sabres general manager checked one box off his to-do list this offseason with the hiring of head coach Ralph Krueger on Wednesday. However, there is still plenty of work to be done to help improve the overall status of the team after another disappointing season in Buffalo.

Right now, Botterill is currently in Buffalo before heading back to Slovakia on Sunday to continue serving in his management role with Team Canada at the 2019 IIHF World Championship. That's currently where Jack Eichel and Sam Reinhart are playing with the United States and Canada, respectively, and where Krueger will be heading to meet up with Botterill, as well as meet with the two young faces of the Sabres franchise.

After that, to focus will shift towards the NHL Draft, which will take place from Friday, June 21 to Saturday, June 22 at Rogers Arena in Vancouver, British Columbia. At the same time, Botterill will try to get free agent winger Jeff Skinner re-signed to a long-term contract before he is set to hit the open market on July 1 at 12 p.m. At the same time, the Sabres general manager will look at several different avenues to add and subtract players to the roster to build his roster for the 2019-2020 season.

Botterill took some time on Friday to join the Howard and Jeremy Show on WGR to talk about what comes next for the team, to give an update on the Skinner negotiations, as well as give some thoughts on the other young players on the Sabres roster moving forward.

Botterill on the process of hiring Ralph Krueger as head coach:

"When we did go through the process of changing the coach, that was more of a management situation. That was a discussion with Randy Sexton, Steve Greeley and myself, and there's been a little bit of feedback from our players and they're certainly excited from what they've heard from their fellow colleagues throughout the National Hockey League who played under Ralph in Edmonton. I think as I said in my press conference, from Day 1, these players are going to realize the passion that Ralph has right off the bat; the enthusiasm he has for the game and how focused he is on helping their development and our team's development."

Botterill on what went wrong for the Sabres last season:

"Winning in the second half of the National Hockey League is a change, and I think we saw that right off the bat. We came in out of the All-Star break, played a game against Columbus, which was fine, but then we played Dallas and the second game, you just see the physical nature of it. They really went after some of our good young in Rasmus Dahlin and Casey Mittelstadt from a physical standpoint. I think it really taught our guys a lesson that this is how you have to win and these are going to be the type of games that you're going to play in the second half. I think as disappointed as our players were at the end of the season, they've learned a lot from what they've went through throughout the entire year, and now it's important that we don't make those same mistakes next year."

Botterill on needing to improve with battles in both ends of the ice:

"You look at the playoffs, there's certainly some strong and physical players, but it's about getting to the front of the net and about winning the battles in front of the net in your own [defensive] zone. We have players that have enough size, but now it's just understanding how to go into the corners and win battles. I go back to my own experiences being a part of teams in Pittsburgh that played in 2008 and 2009 [in the Stanley Cup Final] against the Detroit Red Wings. [Pavel] Datsyuk and [Henrik] Zetterberg would always come out of the corners with pucks, so you have to find a way. Whether it's physical strength or using your skills to win 1-on-1 battles. I think that's something we have to improve on as a team."

Botterill on the need for depth scoring:

"We just relied too much upon Jeff, Jack, and Sam for scoring this year. We have to look to bring in more talent from that end, and then we also have to continue to develop our own talent. Whether it's Casey Mittelstadt or whether it's bringing up [Victor] Olofsson or [Alex] Nylander, or Tage Thompson taking a step in his development, or Conor Sheary, who we think there's more offense that he can provide."

"What I liked about Casey was his compete and his battle. He didn't shy away from those difficult areas there, but I did think that he wore down as the season progressed. Especially in back-to-back situations, I think he struggled there. Some of his best hockey came after breaks or there was a little bit more than just a day off or something like that. I think he can take his conditioning to another level, and I think he's focused on that this summer. I also think his offensive creativity that he can bring will allow him to eventually go into that top-six role."

"We went through the coaching search here, sometimes people get a little impatient, but we wanted to make sure we went through the process correctly. I think what's going on with Jeff and ourselves now is there was never going to be an extension announced before a coach was hired. A coach is now hired, we'll continue our discussions there and get the chance to sit down with Jeff and go over things with how we see him fitting in, and how Ralph is going to coach this team and how he will interact with his players and his structure moving forward. Then we'll hopefully find a way to get a deal done. From our standpoint, our discussions with both Jeff and Newport Sports have been extremely positive."

Botterill on the development of Rasmus Ristolainen:

"Ristolainen is just like anyone else - he has his faults and he has to continue to improve his game like so many of our other players. What we've loved seeing is when he's in that matchup situation. I think about the end of February, we played back-to-back games against Tampa Bay and Washington, and he had the specific role of playing against [Nikita] Kucherov, playing against [Alex] Ovechkin, and I think when he has that specific matchup, he does an amazing job with that."

"I think players continually develop. Games played is not the factor to me, it's age. Especially with Ristolainen in his mid-20s right now, there's plenty of development going on there. You look at Nicklas Lidstrom, you look Kris Letang, all of these defensemen are in their late-20s, early-30s where they really come into their prime from that standpoint. There's always in injury factor that you have to play into, but I think with most young players there's always opportunity for growth, certainly for a defenseman there."