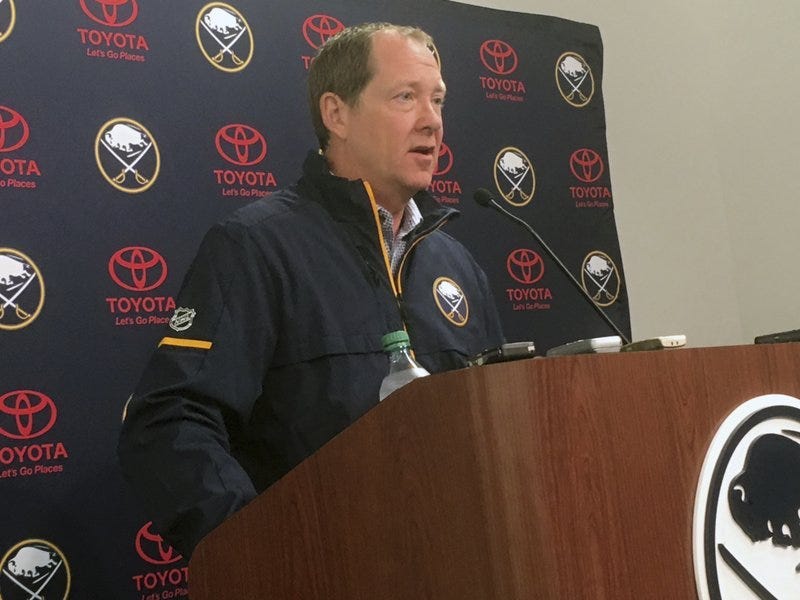 Buffalo, NY (WGR 550) - During the Sabres Post-Game Show on Thursday, Phil Housley was asked about if there needed to be changes on his defense. He answered by saying that was Jason Botterill’s job.

Housley starting off his media time on Friday saying he misunderstood what was being asked of him, “I misunderstood a question yesterday. I took it as if there was any players coming up from Rochester and that’s Jason’s job. That’s what I meant about that.

“Jason and I talk on a day-to-day basis about our team, but I have total faith in our D-core that they can get the job done. They’ve proven it in the past, they put us in this position and we’re going to correct the mistakes.”

If Saturday’s lineup is like Friday’s practice, Nate Beaulieu and Matt Hunwick will go into the lineup for Jake McCabe and Lawrence Pilut.

Sam Reinhart also wanted to make a statement about his comments after Thursday’s game. Reinhart said they needed more from the goalies. On Friday, Reinhart wanted to set the record straight, “I got a call last night about what I said and at first I was rattled thinking something I said was taken the wrong way, then I watched it again and it came off the wrong way, so that’s on me, that’s not what I meant at all.

“I think follow through the interview a little bit, near the end I’m saying we need to all come back and defend more. I was trying to say we need more for our goalies.”

Reinhart believes they’ve gotten good goaltending from Linus Ullmark and Carter Hutton. He said, “It doesn’t take a genius to know they’ve been our two best guys all year, so I think that’s on me, I was lost in translation and I wasn’t trying to be hard on them at all.”

They’ve been working with Reinhart to be better with the media because in his first four seasons, he’s been, at times, condescending and surly. There has definitely been an improvement, which also comes with maturity. He said, “If you guys look at how I handle myself in the media, I’m probably the most boring guy ever, so that’s on me. I sent our goalies a text last night just to warn them what might be coming out today and if you look at Linus, he’s already one of the best in the world and the sky’s the limit for him.”

Ullmark and Hutton will split the two weekend games. Hutton said he’s totally fine with his locker neighbor, “He texted me and I didn’t really care. He said it came out the way it wasn’t supposed to or something, but I’m not really too worried. I try not to worry about the Twitter eggs or whatever is out there.”

The Sabres only practiced for about 25 minutes at HarborCenter. The lines were:

Buffalo hosts Detroit on Saturday and Winnipeg on Sunday. Brian Koziol will have Saturday’s pre-game starting at noon when he’ll be joined by Phil Housley, Sam Reinhart and Kyle Okposo.