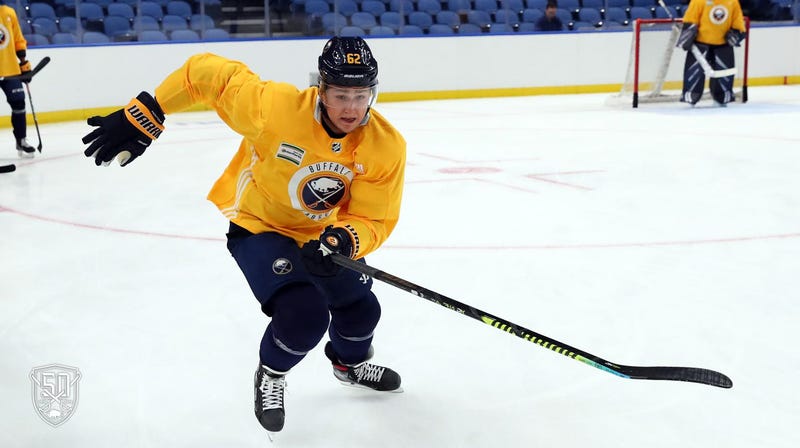 Buffalo, NY (WGR 550) - If you go by practice on Wednesday and Brandon Montour, he probably will play on Friday against the Washington Capitals.

Ralph Krueger said the decision won’t come until Thursday and Krueger added, “Today was really the first practice where he started to feel comfortable with all the traffic out there and he’s definitely doubtful for two games this weekend.”

Montour was paired with Rasmus Dahlin in practice. Since John Gilmour was working in as the extra, it’s easy to deduce that Montour will play in Washington. Montour said he realizes he may not play in both games, “We’re going to talk and see how we feel tomorrow and make a decision after that.

“If I play back-to-back, it’s hockey. The first little bit here is going to be an adjustment because skating by yourself is a little different than playing in a hockey game, but if I play one or I play both, it’s up to these guys.”

Montour was with Team Canada last May, but had to cut his tournament short with a knee injury. He was 100% in training camp and then broke his hand. Montour said, “It’s longer than I expected. It’s tough to have an injury in the summer and focus on that, and then have something like this right away at the start of the year.”

Montour wasn’t convinced he couldn’t play through the hand injury and he did try to, “It happened in the start of the second period and I really didn’t know. I couldn’t grip my stick and took maybe two or three quick shifts to see, and then in the intermission I taped it up. I think I went out for one shift and I said, ‘No, we’re not doing this.’ So I didn’t think it was going to be that serious and got an x-ray done the next day and sure enough, they saw some damage there.”

Montour has been worked hard by rehab coach Dennis Miller to get ready to play, but it still has to take a toll mentally. Montour said, "Just be positive, be a part of the team as much as you can.” Montour added that he used his time wisely, “I’m still getting used to being in this city, so it’s a good time to travel around the area to see good restaurants and see different areas, so that killed some time from me.”

Montour played with Dahlin some last year and he isn’t worried about the kid's recent struggles, “You’ve got to remember he’s 19-years-old, so you can see the talent, where he is and where he will be and we can translate each other’s game.”

The other defensive pairs were Jake McCabe with Rasmus Ristolainen, and then Colin Miller moving to left defense with Henri Jokiharju. John Gilmour worked in.

With Tuesday being an off day and no game until Friday, Krueger put them through a tough practice with no talk of the Capitals. He wanted one day where all the focus was on them and their game. Krueger said, “We definitely went back to some fundamentals and put them through a day on and off ice that went a little bit deeper into the physicality.”

At times against Arizona, Krueger said that they “drifted”. He said, “We’re not reinventing anything now. We’re just trying to stick with our plan right through 60 minutes and that will be an issue for a while because the natural instincts with a little bit of fatigue will take over, but it’s really improving on the foundation that we’ve laid now.”