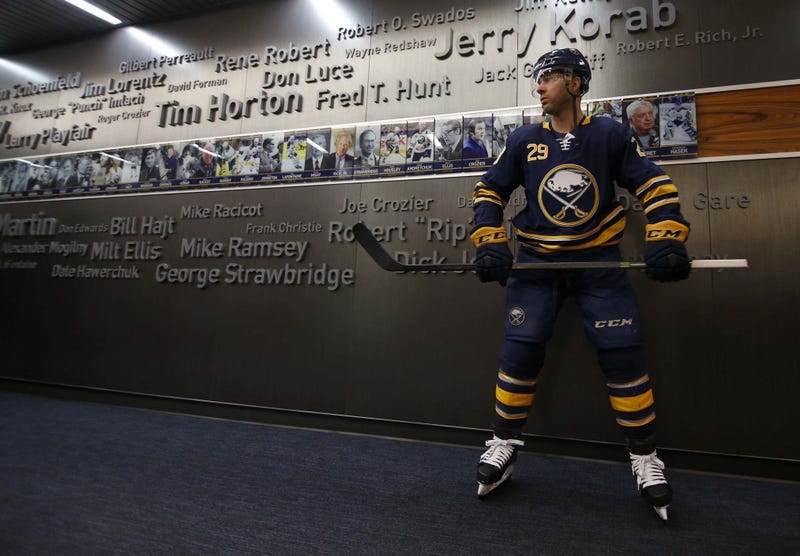 Buffalo, NY (WGR 550) - Starting with the home game against Florida, Jason Pominville got only 9:32 of ice-time or less in four out of five games. In his next five games, he was up over 11 minutes in each game, but he was also a healthy scratch in Dallas. Pominville, of course, wasn’t happy, but he knows how to handle those things, “I was surprised, it is what it is, if you’re name’s called you go out and play and if it’s not, you don’t, but I wasn’t expecting it, but you move on, show up to work and go from there.”

Sportnet's Elliotte Friedman reported over the weekend that Pominville was being made available by the Sabres for trade. Pominville feels that was made up, “No, I don’t really react to that, I’m not in any way thinking of that now, I just want to be in the lineup and help the team. I know I can help this team and be a part of the solution, but it was probably said because I wasn’t playing, then all of a sudden you start making rumors and throwing stuff out there and that’s probably what the case was.”

Pominville has 10 teams he cannot be traded to, but he said the Sabres have not asked for his list, “No, no no, nothing’s been asked and I just go about helping this team and go from there.”

In the first period against Minnesota, the Sabres got a power play goal to take the lead. What I liked about it is the units changed, but Jack Eichel was OK and stayed on the ice. He wound up getting an assist on the Evan Rodrigues goal.

Buffalo had been doing a good job defensively until Lawrence Pilut coughed one up to Marcus Foligno, but Linus Ullmark made a huge save.

In the second period, Minnesota was all over the Sabres, but Buffalo was still able to score twice. The problem was by spending so much time in their own end, the Wild netted three.

Buffalo has decided to just let defenseman Jared Spurgeon do whatever he’d like as he looked like a forward scoring twice.

Pilut did not having a good outing as he got caught watching on the Wild’s third goal, and Charlie Coyle pounced on a puck that was sitting on the post.

I did like how Sam Reinhart waited for Rodrigues to get on-side and then found C.J. Smith cruising in for a layup. Reinhart provided a screen for Buffalo’s second power play goal of the game on a blast from Rasmus Dahlin.

Ullmark had to make 16 saves in the period and despite giving up three goals, he made some big saves as the Sabres couldn’t get out of their own end.

The Sabres seemed to be content to stand around and watch the Wild skate circles around them in that second period.

In the third period, Phil Housley changed some lines again and the 5-on-5 play was better. Eichel was strong all night, and after his line got caught in the defensive zone for over a minute, he still showed the leadership to lead the team up ice, gain the zone, and it wound up with Jake McCabe finding Reinhart for a gorgeous tap-in goal.

Buffalo blew that lead, but Reinhart wasn’t through somehow getting the puck through Devan Dubnyk to get Buffalo the two points it had to have.

Reinhart was good with a goal and an assist, as well as a great screen for Dahlin’s power play goal, but for my money, it was their captain that led the way in this one and did what good players do, make a difference when it matters.