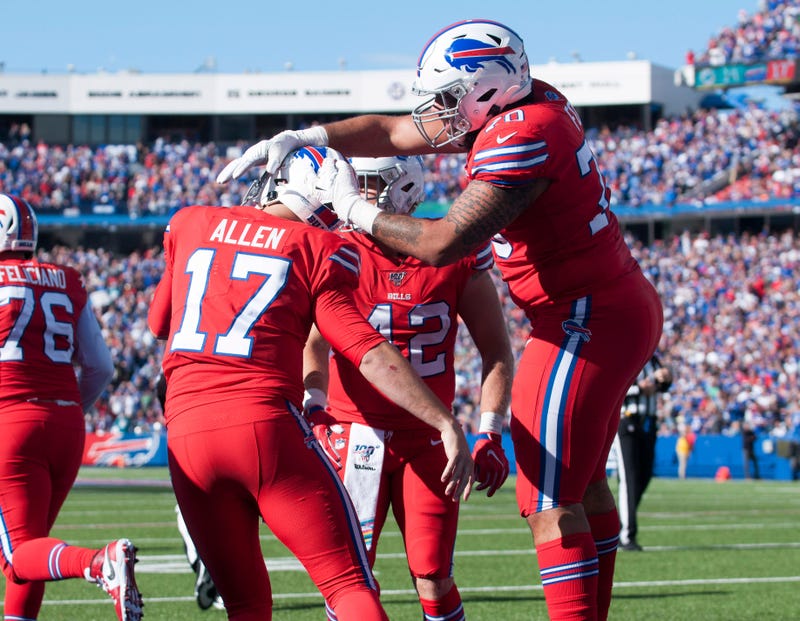 The Buffalo Bills won, and that is what matters more than anything else.

We all thought the Bills would be 5-1 after their game against the Miami Dolphins on Saunday, and that is indeed their record. I didn’t think it would be that tough a day, and I’ll bet many of you didn’t either. Thankfully the NFL does not include style points or a pretty win/ugly win formula in their standings.

As the late Al Davis used to say, “just win baby." The way the Bills' offense looked in this game is the way they’ve looked this season. It's a unit that remains a work in progress and can’t put together a solid game. They play good halves of football, but, coupled with the Bills' defense, it is usually enough to get them a victory.

The passing game did not have the big day I was anticipating, and it was surprising given the fact the Dolphins defense has been awful through its first five games. They also went into this matchup down two of its starters in the secondary. Josh Allen and company were able to move the ball in the first half, but unable to finish drives by getting into the end zone. At times, it was Allen missing a target, or not seeing an open receiver.

There were other moments where Allen and the offensive line had problems with the Dolphins' blitzes. The offensive line had a holding penalty against them on each of the first three drives. On one possession, rookie tight end Dawson Knox dropped a perfect throw from Allen that would have given the Bills a first down at Miami’s 12-yard line, if not closer, but the ball came out of Knox’s hands as he turned to run. Add it all up and it leads to three field goals on those three drives and missed opportunities.While the struggles of the offense might not have surprised you, since that is how they’ve looked this season, I’ll bet you didn’t think the defense would have trouble with Miami’s offense.

We all know there’s the good Ryan Fitzpatrick and the bad Ryan Fitzpatrick, and sometimes you see them both in the same game, but how in the world did the Bills defense give up back-to-back 75-yard touchdown drives?

The defense had given up just three touchdown drives of 70-plus yards through the first five games, but they gave up two to a Miami offense that had produced just four touchdowns all season. In short, the Bills couldn’t get any pass rush on Fitzpatrick. Cornerback Levi Wallace had a rough first half, and the Bills had trouble stopping running back Mark Walton. It was so bad the Bills were booed off the field at halftime when they were trailing the winless Dolphins, 14-9.Then they played the second half.

It didn’t start out very well as Miami took the opening kickoff and moved all the way down to the Bills' two-yard line. I’ll admit ,this was the one time the whole day I was worried. It sure looked like Miami was about to take a 21-9 lead, which isn’t insurmountable but it would have felt that way based on the production from the offense in the first half.

However, the Bills defense came up with back-to-back huge plays. On first-and-goal from the two-yard line, former Dolphins defensive tackle Jordan Phillips blew through the line and took down Fitzpatrick as he was turning to hand the ball off, causing a 10-yard loss. On the very next play, cornerback Tre'Davious White made a great play on a diving interception at the two-yard line. Instead of 21-9, or even 17-9, it stayed a five-point game.The Bills offense that took the field for its initial possession of the second half looked like a different group. Allen was getting the ball out quickly and decisively. The run game, which was actually good in the first half, was effective once again. The Bills put together a 12-play, 98-yard drive that included six first downs. Allen was perfect with six completions for 73 yards. He showed marvelous touch on a 23-yard throw to Duke Williams, and the touchdown pass to John Brown was a perfect 20-yard strike. No penalties, no self inflicted wounds. As it turns out, the Bills would take the lead for good.But the defense wasn’t done yet.

After the long Miami drive that ended with the White interception, the defense shut down the Dolphins on their next three possessions. Miami went five plays (punt), two plays (fumble) and three plays (punt). The fumble was forced by White, and the return by defensive end Jerry Hughes set the Bills up at the Miami 16-yard line.

A three-yard touchdown pass to Cole Beasley allowed Bills fans to breathe much easier as the lead was extended to 10 points with just six-and-a-half minutes left in the game.

Miami would score a late touchdown to make it 24-21 with 1:45 left, but their onside kick was plucked out of the air by Micah Hyde and returned for the final touchdown of the day. After going just 6-of-15 for 90 yards in the first half, Allen was 10-of-11 for 112 yards in the second half and the two touchdowns. He ran in a two-point conversion for good measure, and then threw the ball into the upper deck as part of the celebration. The one incompletion was on a bomb for Andre Roberts.

That miss to Roberts reminds me to tell you that Allen is not good at the throwing of the really deep balls. Roberts ran by his man and then flew past the safety and was wide open. Allen wasn’t even close with his throw, which missed by more than five yards. That was a touchdown waiting to happen. He also missed on a deep throw to an open Brown earlier in the game. Allen has a rocket for an arm, but he has to figure out how to connect on some of these plays.The bottom line is the Bills won. While you might be concerned with how the game played out (and poorer if you bet the Bills to cover the spread), imagine how you would be feeling if they actually lost this game.

Instead, the Bills are 5-1 for the first time since 2008, and every other team in the AFC not currently in first place in a division has, at least, two more losses than the Bills.

In addition, the Sabres are winning too!