A week off can feel a lot longer when your team is 7-3 and in first place in their division... or when you lose on a Hail Mary pass and just want to get over it as quickly as possible.

As you sit at home and watch the rest of the NFL schedule on Sunday, here’s some housekeeping to keep track of what’s going on with the Buffalo Bills roster before they head into their final six games, starting next Sunday against the Los Angeles Chargers at Bills Stadium:

As of Sunday morning, the Bills have 51 players on their active roster. They’re allowed 53 throughout the week.

Cornerback Josh Norman is on the Reserve/COVID-19 list, which means he doesn’t count against the active roster. However, one of the open spots is likely going to go to him as soon as he clears all protocols, which could be at any time.

The team has one more open roster spot. 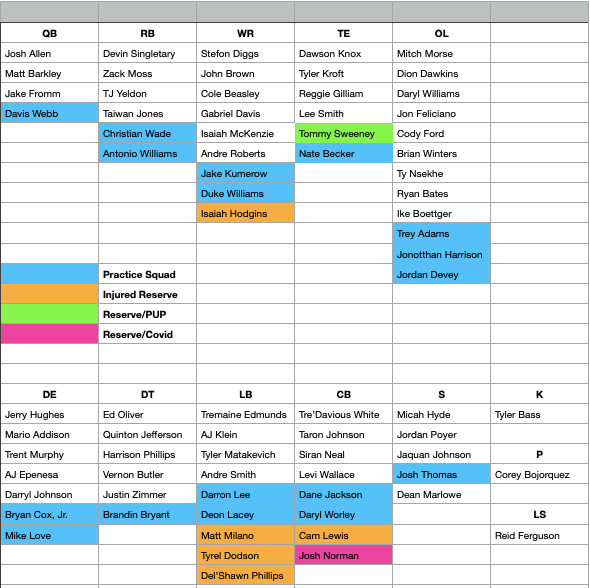 The Bills currently have five players on Injured Reserve. Here are each of their situations:

Was placed on I.R. on Nov. 7 with a pectoral injury He’s missed two games, which means he must miss at least one more. He’ll be eligible to begin practicing again on Monday, Nov. 30. Once he begins practicing, the team will have 21 days to place him on the active roster.

Was placed on I.R. on Oct. 30 with a wrist injury. He’s missed the minimum requirement of three games, which means he’s now eligible to begin practicing again. Once he begins practicing, the team will have 21 days to place him on the active roster.

Was placed on I.R. on Oct. 24 with a hamstring injury. He’s missed the minimum requirement of three games (has missed four so far), which means he’s eligible to begin practicing again. Once he begins practicing, the team will have 21 days to place him on the active roster.

Went on I.R. on Sept. 7 with a shoulder injury. Since he did make the final roster and he’s missed the minimum requirement of three games (has missed all 10 so far), he’s still eligible to play this season, but at this point that looks unlikely. If he does begin practicing, the team will have 21 days to place him on the active roster.

Was placed on I.R. on Nov. 14 with a quad injury. It was his second time being placed on Injured Reserve this season, so he’s ineligible to return to the Bills active roster in 2020.

As stated above, Norman is the only player on the Reserve/COVID-19 list. He does not count against the team’s 53-man active roster while on the list, and can be removed from the list and activated as soon as he clears all league testing protocols.

The Bills had two players opt-out of the 2020 season - defensive tackle Star Lotulelei and cornerback E.J. Gaines. Neither is eligible to return at all this season, even for the playoffs. Both will revert back to their 90-man offseason roster in March when the new league year begins at their contractual status they were scheduled to have prior to 2020.

2020 NFL rules state teams can elevate two players from their practice squad each week to allow them to have a 55-man roster on game day. Those players automatically revert back to the practice squad following that week’s game, without having to be subject to waivers.

However, players can only be elevated a maximum of two times per-team. After that, they must be signed to a contract in order to join the 53-man active roster, and a roster spot must either be open or made available for them with corresponding move.

Also, once a player is signed to his team’s active roster on an actual 53-man roster contract, he is no longer eligible for the two elevations for that club, even if he were to be released and re-sign with the practice squad. This also goes for any player who made the team’s initial 53-man roster. Players who played on another team's active roster, or had already been elevated twice by another team under these elevation rules but then signed to Bills practice squad, would still be eligible for two elevations with the Bills.

Teams are also allowed one-for-one replacements for any active player on the Reserve/COVID-19 list. Those replacements do not count against their two elevations for these purposes.

Here are the players currently on the Bills practice squad and the number of elevations remaining under these circumstances:

The NFLPA’s public salary cap report shows the Bills as currently having $4,554,869 space available for the remainder of 2020. That number will decrease slightly for any players they sign to the active roster as the season goes on. Whatever money is left over can be rolled into next year’s available cap space.

If you’re one to want to look ahead to next season already, here are the Bills’ opponents and where they’ll be playing them in 2021. Dates will be determined next spring: