The Bills' Week 15 scheduled matchup with the Dolphins in Orchard Park is set for Saturday, Dec. 17 at 8:15 p.m. EST.
By Paul Hamilton, WGR Sports Radio 550

Columbus, Ohio (WGR 550) – Things got off to a horrific start for the Buffalo Sabres on Wednesday in Columbus, but they played much better when the second period started. However, Buffalo only pushed one goal into the Blue Jackets' net in a 4-1 loss.

Eric Comrie played his first game as a member of the Sabres and had to face two breakaways, a 2-on-1 rush, and a wide-open defenseman coming down the slot in the first five minutes of the game.

By the time the first period was over, Columbus led 2-0 and outshot Buffalo, 13-2. Shot attempts were 20-7 in favor of the Blue Jackets.

Buffalo found its legs in the second, and I thought the team really used their speed to push the play. It was evident when Kale Clague broke open down the slot, but was stopped by goalie Daniil Tarasov.

Tarasov didn’t stop the next one, as Clague found Jack Quinn in the corner. He did a beautiful job of winning the battle, took the puck behind the net and found Chase Priske, who came open down the slot.

I thought for the final 40 minutes, Quinn was Buffalo’s best player. He was creative with the puck, and generated quite a bit of offense playing with Brandon Biro and Victor Olofsson.

The Sabres' best chance to tie the game came from Jiri Kulich, as he was left open in front only to be stopped by Tarasov.

As Buffalo got more power play opportunities, both Quinn and JJ Peterka missed one-timers from the circles that they will score on more times than not when they have more than just two games under their belts.

Buffalo did give up two goals in the third, as they were pressing for the tying goal. The Sabres outshot the Blue Jackets, 21-18, in the final two periods.

During postgame, Comrie admitted he did have some nerves going into his first game with the Sabres, but he used those nerves to his advantage. 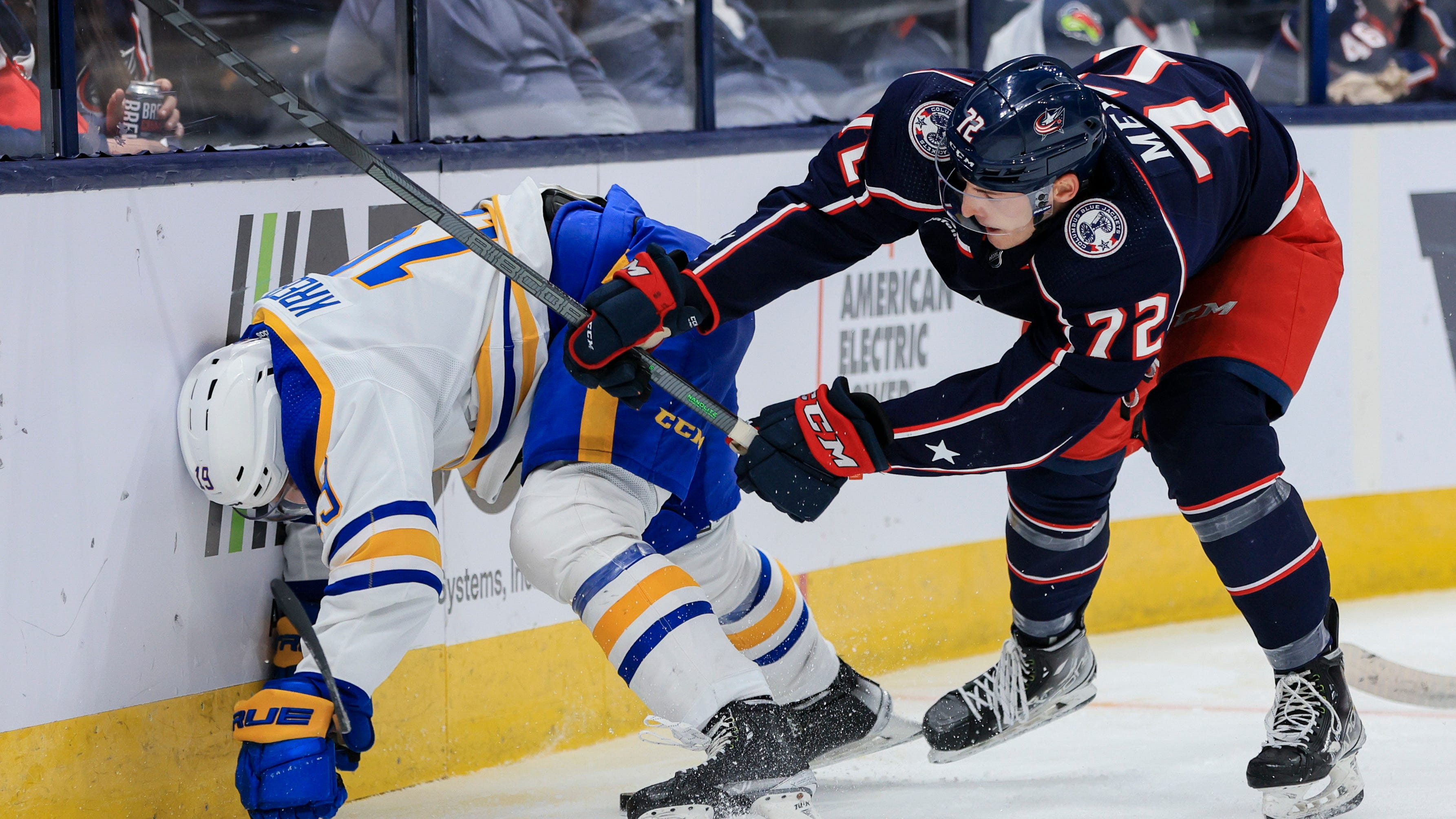 Clague and Priske played together, and some of you may not know too much about them. They’ll serve the Rochester Americans well, as they look like they have the ability to be injury call ups if needed.

Clague played 38 games with the Montreal Canadiens and Los Angeles Kings last season, while Priske saw four games with the Florida Panthers. Both saw action in the AHL too.

The Sabres are now 2-1-0 in the preseason and next host the Pittsburgh Penguins on Saturday afternoon.

Photo credit Losi and Gangi
We strive to be a platform where varying opinions may be voiced and heard. The views, thoughts, and opinions expressed by the author(s) of this article and/or by those providing comments are theirs alone, and do not represent those of Audacy, Inc. We are not responsible for any damages or losses arising from this article and/or any comment(s).
Featured Image Photo Credit: Aaron Doster - USA TODAY Sports