Buffalo, N.Y. (WGR 550) - The Buffalo Sabres hosted the Tampa Bay Lightning on Monday night in the last game of their short homestand.

The Sabres came out hot in the first period even though they didn't strike first. Lightning forwards Brayden Point and Corey Perry each scored giving their team a 2-0 lead, but Buffalo answered back at the end of the frame with goals from Tage Thompson and Jack Quinn within a minute of each other.

The Sabres kept up the pressure in the second period, striking first this time with a goal from newly acquired forward Tyson Jost, giving Buffalo a 3-2 lead. As the period went on, the Sabres continued to outshoot the Lightning, but Point scored his second off the night on the power play, which tied the game again.

Buffalo came out of the locker room for the third period with purpose, as Dylan Cozens and Jeff Skinner gave the Sabres a two goal lead midway through the period. However, Buffalo was unable to close things out, as Lightning captain Steven Stamkos scored soon after Skinner, and former Sabres prospect Brandon Hagel tied the game again with a power play tally to force overtime.

Despite numerous chances from Thompson and Owen Power, the Sabres couldn't get it done, and Stamkos scored his second of the night with just over two minutes left in overtime. 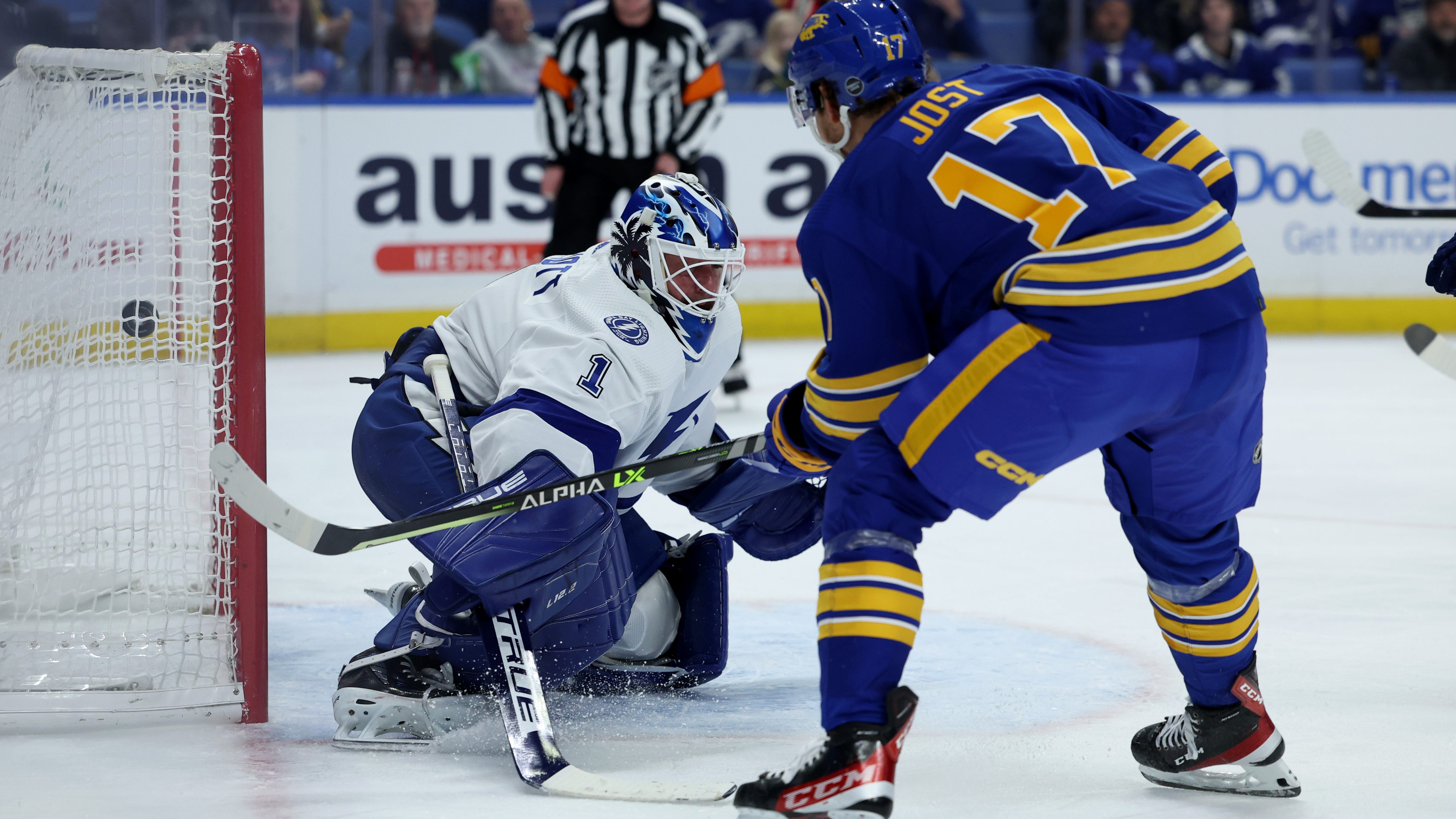 Sabres struck down by Lightning in overtime

The Sabres controlled a large portion of this game, and at the end of the day, couldn't finish when it mattered most. 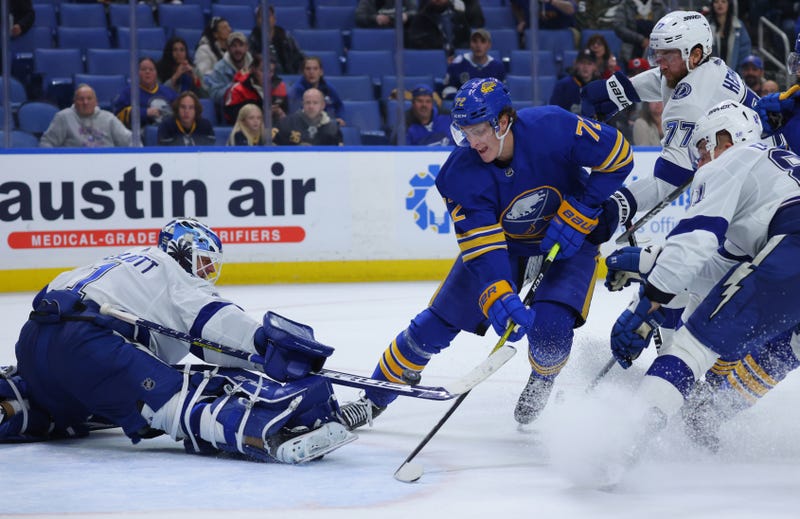 It was all Buffalo for a majority of this game right from the opening puck drop. The Sabres outshot the Lightning in each period, and outshot them overall, 37-25.

Shooting more obviously doesn't win you games, but Tampa Bay has been one of the marquee teams in the NHL for about five years now. In this case, it's a positive sign to see from the Sabres, who have struggled mightily in years past against teams like the Lightning.

The Sabres need to keep that intensity and shot volume up in games moving forward, especially when having some of the better teams in the NHL on their upcoming schedule. 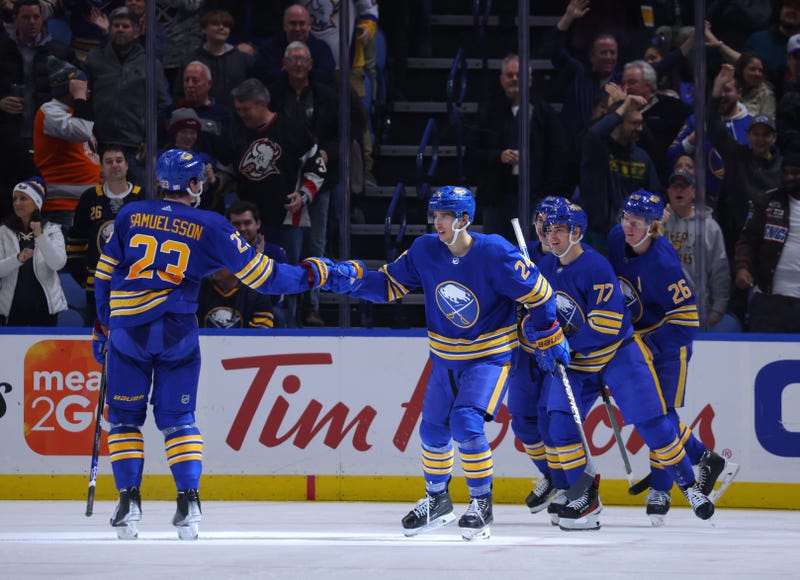 Despite the loss, the Sabres' snipers were very active.

Cozens, Skinner and Quinn all showed off their sharpshooting skills at various points of the game. It's important that players like these get their shooting going on a consistent basis game-in and game-out.

Sharpshooting forwards are a hot commodity on almost every team in the league. The more you have, the better your team is. The Sabres have had these kinds of players on their team for some time now, but have failed to use them to their full potential.

Players like Cozens, Quinn, Skinner and a few others on the team simply need to shoot the puck more, and they'll eventually find more goals.

The players can definitely hit their spots, they just need to be given the opportunity. 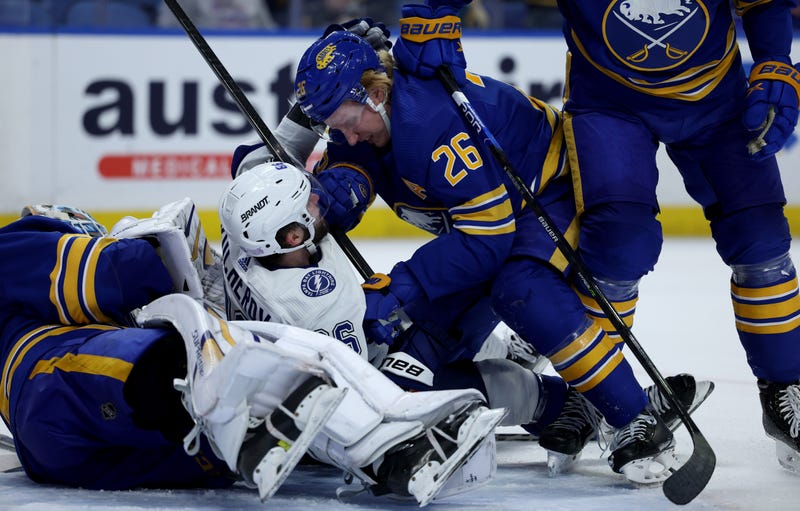 3.) Finish what you started

Plain and simple, the Sabres got complacent as the game went on.

The team took a couple of stupid penalties late in the game and couldn't get a stop on the penalty kill, leading to the game-tying goal.

The defensive breakups in front of Ukko-Pekka Luukkonen have to be better in these instances. The Lightning scored on three of their four power play opportunities as well, which is disappointing because of how well the penalty kill has been improving.

After the wild ending of the third period, the Sabres still dominated play in overtime, having four golden chances to win. These chances are ones that need to be finished off to secure the victory and finish off a game properly.

The Sabres head on the road next as they will travel to Detroit to battle the Red Wings in another Atlantic Division game on Wednesday. Puck drop at Little Caesars Arena is scheduled for 7 p.m. EST, which means pregame coverage starts at 6 p.m. EST with Schopp and the Bulldog on the radio home of the Sabres - WGR Sports Radio 550.