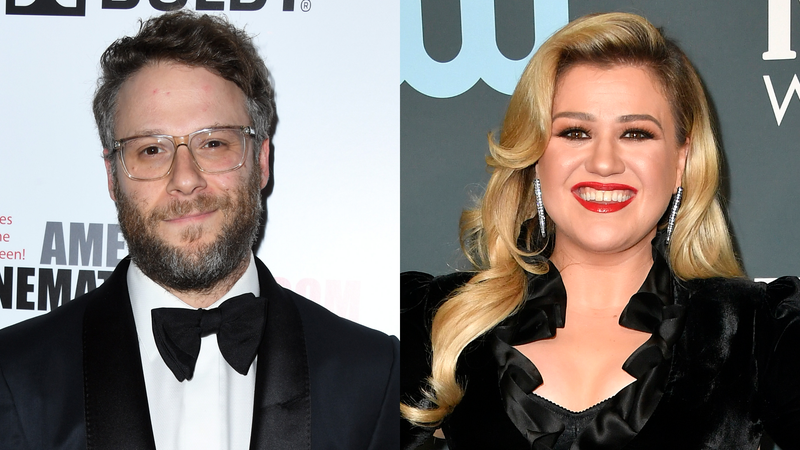 After years of hearing "Ahh, Kelly Clarkson!" shouted at her wherever she goes, Kelly finally confronted the man who is responsible for the now-iconic movie line from The 40-Year-Old Virgin that has haunted for the over a decade.

During his appearance on her talk show to promote his new book, Yearbook, Seth Rogen, was put in the hot seat by Kelly. As Kelly stated, “before we get to anything, I have something to tell you,” referring to a bit of gossip she received from the films’ director Judd Apatow.

“Judd Apatow told me that, and I want to know if it's true... it's your fault that people scream my name everywhere I go,” the singer questioned her guest. "I could literally do anything in the world, doesn't matter how many hits, what I do in life, I could save a family from drowning, fires... and literally the one thing people know me from is 'Ahh, Kelly Clarkson!’”

Also starring Steve Carell, Rogen appeared in and co-produced the 2005 film. And what was unknown until now, he also came up with that line, that has followed The Voice coach for over a decade… You all know the scene, when Carell’s character Andy is getting his hairy chest waxed, and because he’s a man the sheer pain cannot be contained and results in him screaming out, "Ahh, Kelly Clarkson!” Yeah, that scene.

Well Seth has officially taken responsibly, and confessed to Kelly that a random moment on TV inspired him to add her name to the script, but not before apologizing profusely for it becoming such a thing.

"I'm terribly sorry, first of all. I owe you an apology," said Rogen, explaining that part of his job was to write "alt jokes," or "alternate jokes." For that scene, in particular, he explained, "We don't always like to have profanities. Judd was like, 'You should write a list of jokes that are dirty jokes and a list of clean jokes.' And it was hard to write the clean jokes. I honestly think I was sitting on my couch writing the jokes and you came on television. I saw you and it was Kelly Clarkson!"

Rogen noted how the hard "k" sound "is known for being funny" which happens to have not one, not two, but three of, despite Clarkson starting with a C. Of course, it was all in good fun for Kelly, who alo