Between 2015 and 2017, Chicago Cubs third baseman Kris Bryant was one of baseball's best players at any position.

During his first three MLB seasons, Bryant won a National League Rookie of the Year Award, a league MVP and helped the Cubs to snap a 108-year World Series drought. Over that period, FanGraphs says that the only players that were more valuable offensive performers were Mike Trout and Josh Donaldson.

In the three years since, however, a career that once appeared destined for Cooperstown has hit a wall. We should note that in 2019, Bryant was still a very effective player, homering 31 times and posting a 4.8 fWAR. That said, that year is sandwiched in between two perplexing campaigns.

In 2018, a left shoulder injury limited Bryant, having an otherwise strong season, to just 102 games. In the pandemic-shortened 2020 season, Bryant dealt with injuries to his left ring finger and wrist, along with his oblique. In just 34 games, Bryant slashed an underwhelming .206/.293/.351.

If healthy, you still get the feeling that Bryant would be on the cusp of being a top-10 third baseman. Still, as the 29-year-old enters his contract year, you're left to wonder how he went from one of the sport's most dominant forces to a relative afterthought at a crowded position. 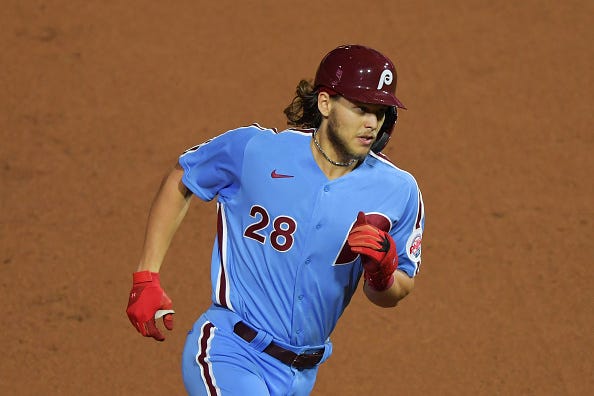 If you think that Bryant or Eugenio Suarez should be in this spot, fair enough. Still, Bohm finished second in National League Rookie of the Year Award voting in 2020 after slashing .338/.400/.481 with 23 RBIs and an .881 OPS in 44 games. He only homered four times, but those four home runs traveled an average distance of 411.5 feet. He added 10 pounds in the offseason, and new teammate Archie Bradley has predicted that he'll hit 30 home runs in his first full major league season. The only major question with Bohm is whether he'll stick defensively at third base, but regardless of where he lines up defensively, his bat is going to play. 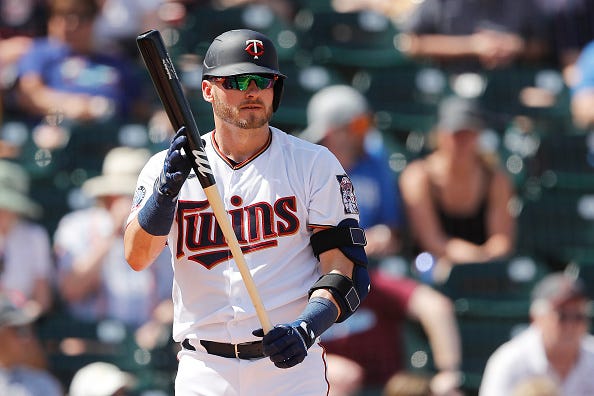 Donaldson is difficult to project because he's 35 years old and two of his last three seasons have been destroyed by injuries. The problem is that in between those two seasons Donaldson hit 37 home runs and drove in 94 runs for the Atlanta Braves in 2019, so when he's healthy, he's still shown to be an elite offensive performer. We're going to bet on his health in year two of a four-year/$92 million pact, and say that Donaldson is a major part of one of baseball's deepest lineups. 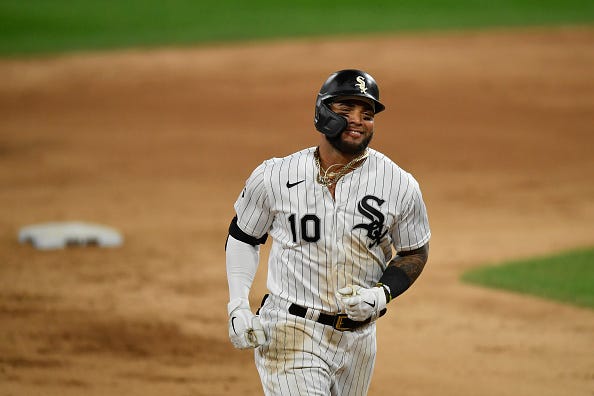 Moncada only hit .225 in 52 games a season ago, but he's two seasons removed from slashing .315/.367/.548 with 25 home runs and a 5.6 fWAR. It can be hard to keep track of all the young talent on the White Sox, but Moncada is one of the very best players that Tony La Russa will have the privilege of penciling into his lineup. 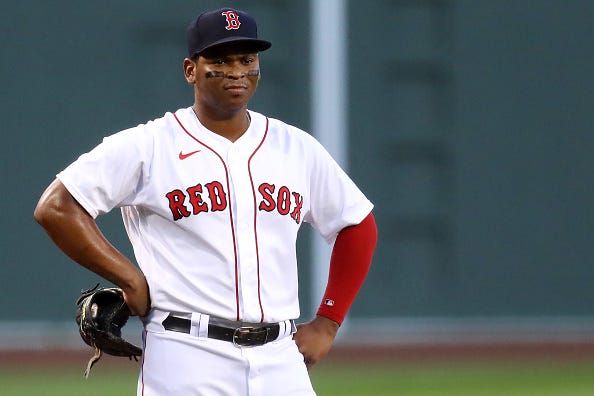 Rafael Devers is hoping to bounce back in 2021. Photo credit (Maddie Meyer/Getty Images) 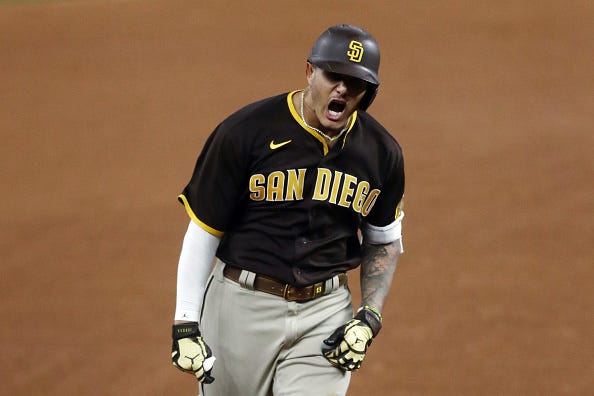 Machado's first season with the Padres was mildly disappointing, but he bounced back in a major way in 2020, slashing .304/.370/.580 with 16 home runs, 47 RBIs and a 2.6 fWAR. He's no longer the all-time great defensive third baseman that he was in Baltimore, but Machado is still among the very best defenders at his position. While much of the focus last season was on Fernando Tatís Jr. last year, it was Machado that finished third in National League MVP voting. Some thought Machado would struggle to see postseason baseball when he signed a 10-year/$300 million deal with the Padres, but he's getting the last laugh, as he's one of the best players on a World Series contender. 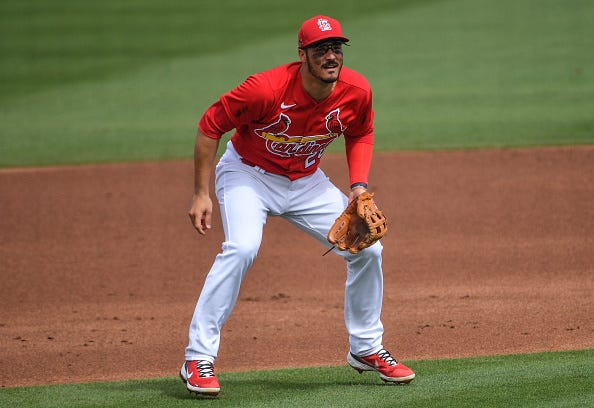 Hall of Famer Mike Schmidt, widely considered the greatest third baseman ever, said this offseason that he believes Arenado can usurp him for that title. We're not quite sure about that, but he's definitely having a Hall of Fame-caliber career. Now that he's no longer playing his home games at Coors Field, his ability to prevent an offensive dropoff may determine whether he reaches Cooperstown. We're pretty confident that Arenado's glove will travel wherever he goes, but to this point, he's slashed .263/.322/.471 away from Coors Field, a stark contrast to the .322/.376/.609 he's hit in Colorado. 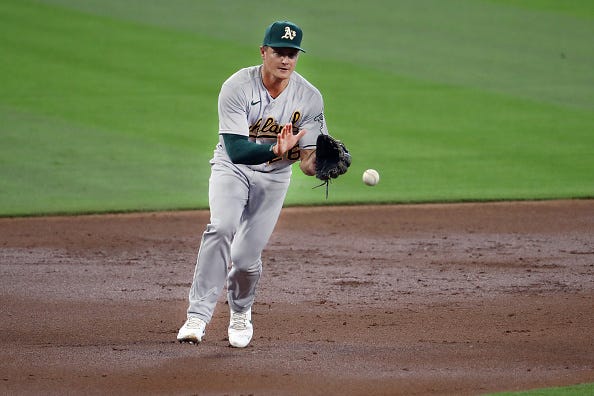 For as dominant as Arenado is defensively, Chapman has 26 more defensive runs saved than him since the start of the 2017 season. A hip injury limited Chapman to just 37 games in 2020, but in the two seasons prior, he combined for 12.9 fWAR, the sixth best mark of any player in baseball. Even as he enters his age-28 season, it feels like the two-time Platinum Glove Award winner is still underrated nationally. 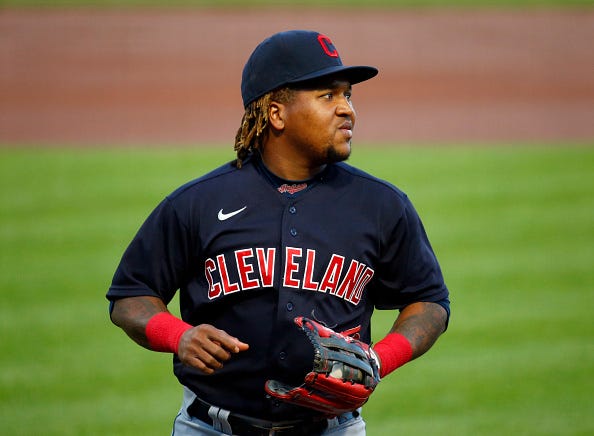 Gone is Francisco Lindor, so Ramírez firmly becomes the most notable player in Cleveland. Frankly, he's been a better player than Lindor over the past three seasons anyway. In the past five seasons, Ramírez has been the fifth-best offensive player in the sport according to FanGraphs, slashing .290/.366/.529 with 119 home runs and 393 RBIs. Ramírez has finished in the top three in American League MVP voting on three different occasions, and if he's able to help Cleveland return to the postseason in 2021, this may be the year he finally wins the award. 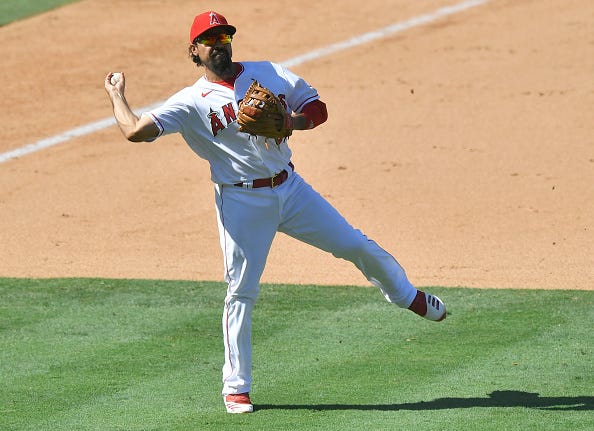 In his first season with the Angels, Rendon wasn't enough to help Mike Trout return to the playoffs, but it certainly wasn't his fault. A year after helping the Washington Nationals to win the World Series, Rendon hit .286 with nine home runs, 31 RBIs, 38 walks and a .915 OPS. Rendon isn't a special player defensively, but the 30-year-old is one of the most complete hitters in baseball currently. 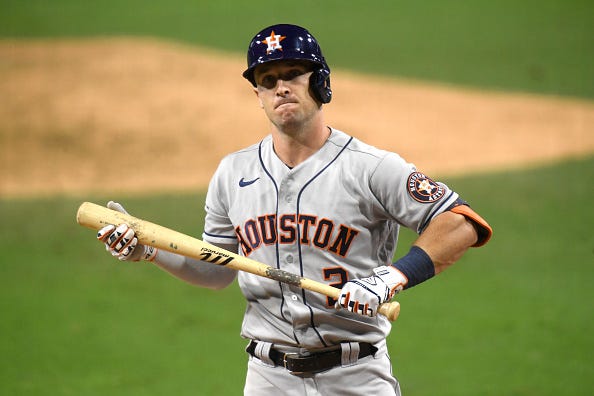 Alex Bregman is one of the best offensive players in baseball. Photo credit (Harry How/Getty Images)

Bregman did hit just .242 in the pandemic-shortened season, but still posted a .350 on-base percentage. Considering he was the third-best offensive player in baseball during the two prior seasons, we're going to predict that Bregman has a monster 2021 campaign. If Mike Trout is healthy, he'll be the favorite for the American League MVP, but Bregman, still only 26, is probably next in line.