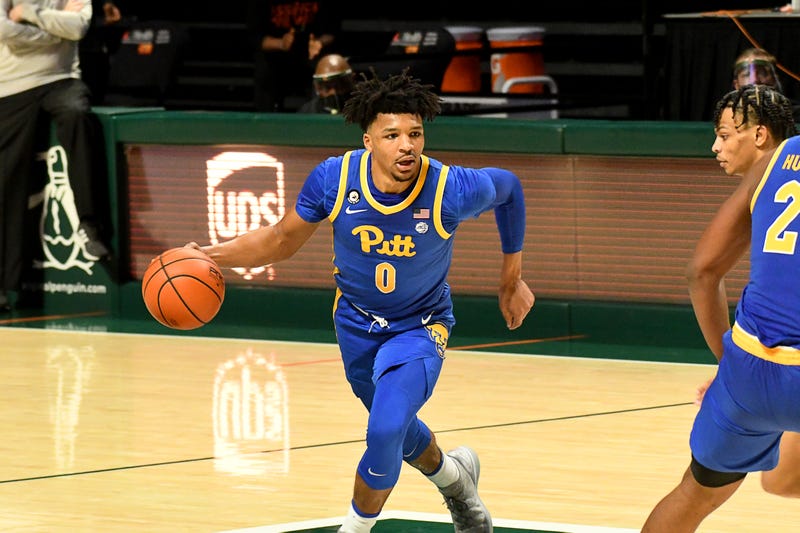 PITTSBURGH (93.7 The Fan) – The Pitt Panthers survived foul trouble and took advantage of a depleted Miami team to win their ACC opener 70-55.

Ithiel Horton with a team-high 18 points on 4 of 6 from three.

“A big-time road win for us,” said head coach Jeff Capel.  “It was great to see Ithiel step up and start making some shots.  That’s something that we’ve seen a lot in practice.  Hopefully this is a game that gets us going.  It gives us a different weapon when he’s shooting the ball and playing with confidence like that.”

Panthers led most of the first half, but Justin Champagnie played only four minutes and Xavier Johnson twelve because of fouls.  Hurricanes cut the Panthers lead to just a bucket at halftime.

Pitt would go up seven, but Miami took the lead back with 15:45 to play and then a time out.

“I didn’t like the way we started the second half,” Capel said.  “After we got up, we started doing things that were not good things.  The shot selection, the not executing and I was really angry at our group.  I let them know that during that time out and they responded in a big, big-time fashion.”

Immediately following was a 19-2 run and the game would not be in doubt again.

“We think we have more talent and when opportunities present themselves, they have to be ready,” Capel said.  “It was great to have Nike out there today.  He got us going with a three, but you saw the rust.  That gives us another weapon.”

“Next man up,” said junior Au’Diese Toney, who finished with 15 points and 5 rebounds.  “You always have to be ready at all times.  Even though we had two guys in foul trouble, the others stepped off the bench and impacted the game well.  That’s how we got this done.”

It was against a Miami team that was dealing with a number of injuries, but still Pitt’s largest winning margin on the road in 7 years.  Panthers shot 41% from three and were a plus 14 in rebounding, two areas they have worked hard to improve.

Pitt is 5-1, three years ago they won 8 games total.  It will get tougher with Louisville at the Pete on Tuesday and then a game at Duke a week later.  There are areas to improve, but now a 5-game winning streak.