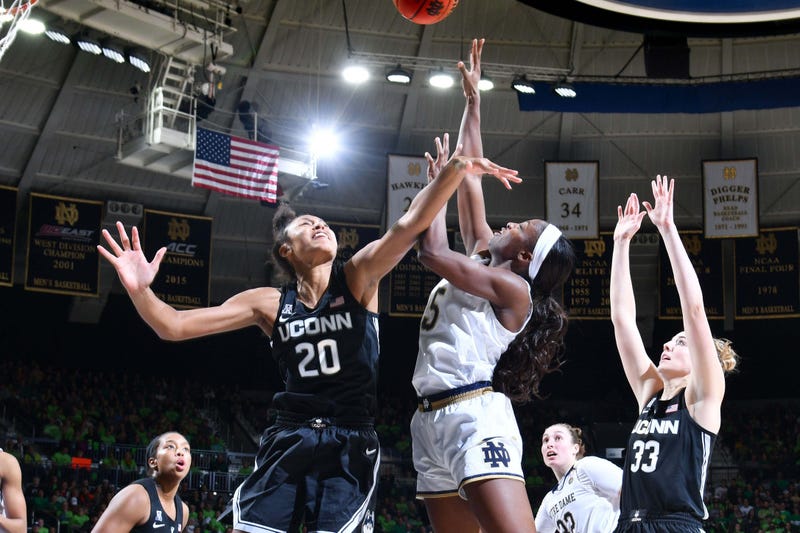 UConn is off to its 12th consecutive Final Four this weekend, extending its NCAA record, as the Huskies head to Tampa. For the seventh time during this stretch and the eighth time overall, the opponent awaiting Connecticut is a familiar one: the Notre Dame Fighting Irish. The old Big East rivals will continue the best rivalry in women’s college basketball on Friday night, with a spot in the national title game on the line once again.

In the previous seven matchups it’s actually Notre Dame that has a slight edge, 4-3, although UConn holds the 2-0 advantage in championship games. As we get set for another heavyweight tilt, let’s re-live how the first seven Final Four meetings ended up:

After splitting two earlier meetings that year – Notre Dame won in South Bend, while the Huskies stunned the Irish in the Big East final at Gampel (the “Bird at the Buzzer” game) – the two met in the Final Four in St. Louis for a rubber match.

It was all Huskies in the first half, leading by as many as 16 before Notre Dame cut it to 12 at halftime. Then Connecticut went ice cold, scoring one field goal in a 6:30 span in the second that allowed the Irish to take a 61-59 lead, they’d later go on a 14-0 run and win it 77-65. Two days later the Irish would win the school’s first championship. 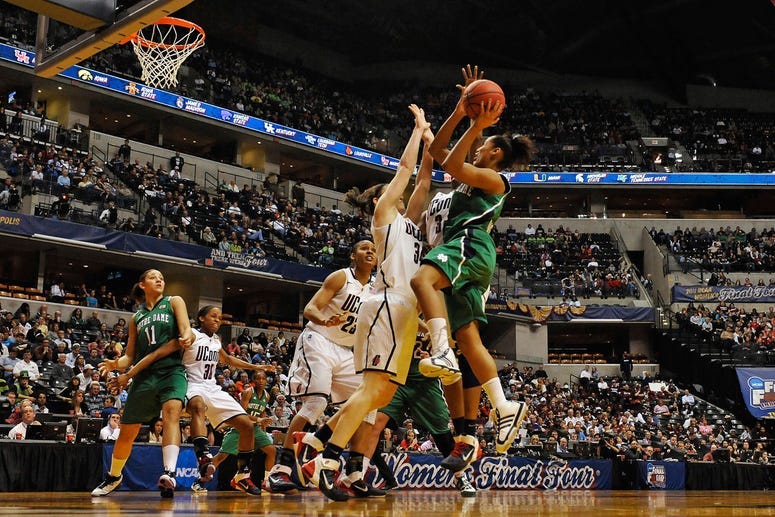 After the Huskies won the previous three meetings that year (twice in the regular season, plus the Big East Tournament), the Irish exacted revenge in Indianapolis. Kind of like 2001, UConn had an eight-point lead early in the second half before Notre Dame got hot, going on a 21-6 run and eventually pulling away behind Skylar Diggins’ 28 points and six assists. Maya Moore ended her career with a loss, despite scoring 36 points. Notre Dame would lose to Texas A&M in the title game.

That 2011 win for Muffet McGraw’s bunch would start a stretch of dominance unseen against the Huskies, winning seven out of eight, including the 2012 Final Four in Denver. After Natalie Novosel tied the game at 67 with 4.6 seconds left in regulation, Notre Dame found its stroke in the extra session, making three three-pointers, to which UConn had no response. The Irish advanced, losing in the championship game to undefeated Baylor. 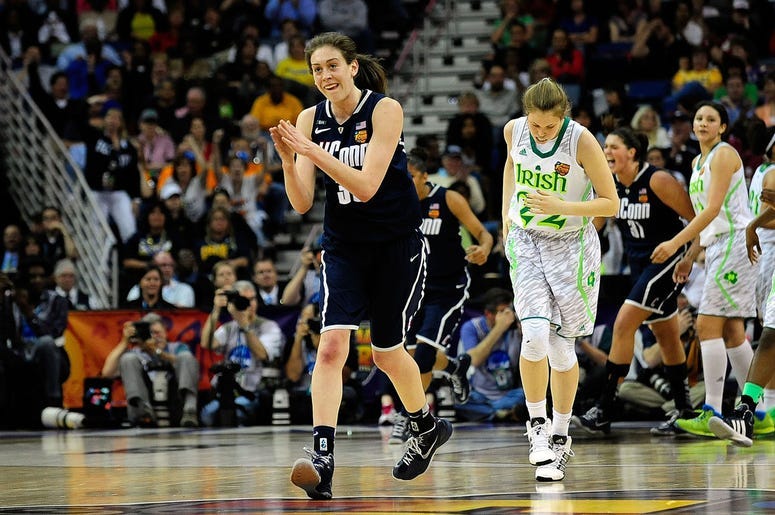 After losing three straight times to the Irish during the year (twice in the regular season, plus the Big East Final in Hartford on a game-winner with 1.8 seconds left), UConn finally solved its Notre Dame problem in New Orleans, as a freshman found her way.

After a somewhat streaky freshman campaign, Breanna Stewart came into her own in the NCAA Tournament, and had a national coming out party in the Big Easy. Stewie finished with 29 points, five rebounds and four blocks, while Moriah Jefferson and Kelly Faris held Skylar Diggins to 3-for-15 shooting. The Huskies would beat Louisville in the title game.

The first meeting between the two in a national championship game came with some history, as both teams entered the game undefeated. A seven-point game at halftime, it was all Huskies out of the locker room, as they went on an 18-5 run to put it away early. Stefanie Dolson led the charge, finishing with 17 points, 16 rebounds, seven assists and three blocks, helping UConn outrebound Notre Dame 53-31.

For the second straight year the two rivals met in the title game, and again it went the way of Connecticut. A dogfight for much of the game, Kaleena Mosqueda-Lewis and Moriah Jefferson were the high scorers with 15 points apiece, as UConn held Notre Dame to 30 percent shooting. KML hit a couple of big shots down the stretch, including a three-pointer and a jumper in back-to-back possessions, to lift the Huskies to a 10th national title and third in a row.

Again in the national semifinal, the Irish ended the Huskies’ run at another perfect season in dramatic fashion. Down seven at halftime, Notre Dame took the lead late in the third quarter, and it looked like the Irish would win it in regulation. Up 79-74 with 21 seconds left, Notre Dame saw its lead evaporate on a Napheesa Collier three, a turnover and a Kia Nurse layup. Another turnover gave UConn a shot to win it in regulation, but Gabby Williams’ turnaround was off the mark.

In overtime the Huskies made back-to-back threes in the final 40 seconds to tie it again at 89, when Arike Ogunbowale started the most memorable weekend any player has ever had in a Final Four. Her jumper with one second left gave Notre Dame the two-point win. Then 48 hours later she outdid herself, hitting a wild championship-winning three against Mississippi State at the buzzer.