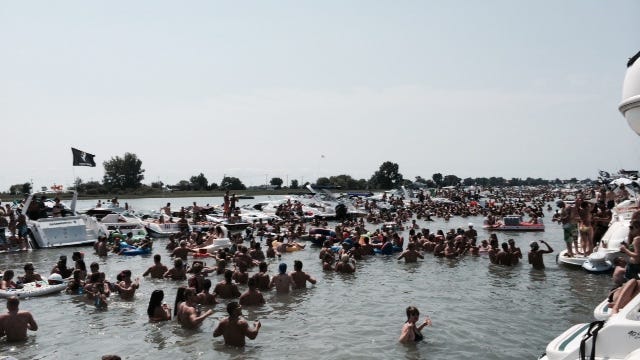 (WWJ) It appears a big boat party is on for this weekend in metro Detroit, despite the pandemic.

Muscamoot Bay, known as a hotspot on Lake St. Clair on summer weekends, is the site of the annual "Raft Off" the first Saturday in August every year.

And according to a Facebook page promoting the event, the notoriously wild party will be taking place as planned on August 8, 2020.

Not much social distancing is expected, as boaters tie their vessels together in two rows, then party together in waist-deep water in between.

"Boaters from all over the world gather for a full day's festivities. Come tie off, mingle and walk the Gauntlet," the event posting reads. "GPS coordinates for Muscamoot Bay are N 42.55783 and W -82.66071."

Each year participants try to break attendance records, which in the past have reached well into the thousands — with 5,000 boats the advertised goal.

Attendees this year should expect to encounter the usual bikini-clad women, Jell-O shots and beer bongs — but it's unclear if they'll see any masks.

Listed suggestions for "must have" items in a Muscamoot Bay survival kit include alcohol, Band-Aids and a bathing suit, along with cigarettes/cigars, condoms and a cooler.

Reaction to the event plans were mixed among those responding to a post in a Macomb County group, with a decided slant toward the negative.

Tony Polanski responded: "Doing my best to get out there, so much fun."

Paula O'Nan  commented: "Can you say super spreader? Yes? Then you said it right."

Responding to those expressing concern, Patty Thomas Colleen Ann wrote: "Oh stop. That wagging finger in the face, is getting old. You are not any safer, than the yahoos on the lake. You are less safe, because your immune system, has been weakened, even more, by cloistering in your home, hiding from the boogeyman virus, and sanitizing everything in sight."

This comes after, on a Friday in June, boaters swarmed Lake St. Clair's Gull Island for a similar event known as Jobbie Nooner — seemingly unworried about COVID-19.

Last month, health officials alerted people who attended a 4th of July weekend party on northern Michigan's Torch Lake that they could have been exposed to the coronavirus.

Footage of a yet another packed lake party in the state went viral after several hundred people danced and drank, cramped together at the Sandbar in Cass County's Diamond Lake. "Looks like a recipe for disaster," reads a tweet with video of the July 4 event, which now been viewed more than 11 million times. Cass County Sheriff Richard Behnke said he submitted a report to the prosecutor’s office, recommending that organizers be charged with violating the Gov. Gretchen Whitmer's executive order regarding large social events.