MT. CLEMENS (WWJ) - A Roseville man has avoided a lengthy prison sentence in the hit-and-run death of bicyclist in Warren, early this year.

William Christopher Davis, 24, was sentenced Wednesday to one year in jail, plus community service and five years probation after taking a plea deal on charges in the death of 60-year-old Eastpointe resident Randy Menendez on Super Bowl Sunday.

According to the Macomb Daily, Davis' attorney and Macomb County Circuit Judge Kathryn Viviano reached an agreement in October in which Davis would plead no contest to charges of reckless driving causing death, leaving the scene of an at-fault crash – both punishable by up to 15 years in prison -- and lying to police, a 4-year felony.

In exchange, Davis would be sentenced to one year behind bars, which is well below the minimum term of the sentencing guideline range of 29-57 months in prison.

In court on Wednesday, Menendez's family was less than pleased with the outcome; his mother, Sophie Palazzolo, telling the court at sentencing: “I get a life sentence not seeing my son – not being able to hold him and love him."

Police said Davis was driving his Dodge Charger SRT around 70 mph when he struck Menendez, who was riding his bike across Groesbeck Hwy. at 10 Mile Rd. on Feb. 3, throwing him around 240 feet.

Davis didn't stop, according to Warren Police Commissioner Bill Dwyer, leaving Menendez -- who'd been on his way to his mother's house to watch the football game  -- lying in the road.

Menendez was pronounced dead at the scene.

Davis was arrested more than a week later after police discovered his heavily-damaged car covered with a tarp behind a house in Detroit. 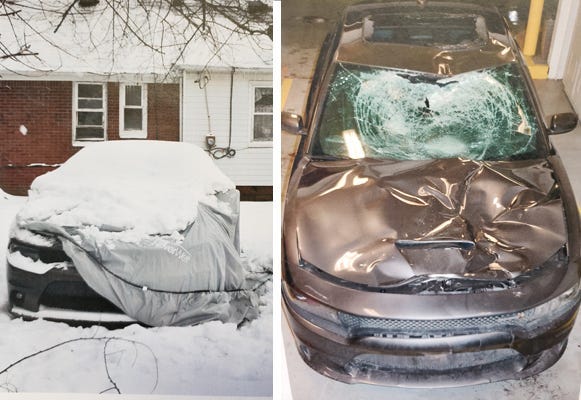 "It was an accident until they left the scene of the crime, and then it was a murder," she told WWJ's Jon Hewett and other reporters. "They left my poor brother for dead. That is the part that we can't reconcile."

"The speed was excessive, you left the scene, you hid," she said. "It took quite a a few people, probably, to move this stuff around and hide it (from) detection. And me...if I hit somebody by accident and I was truly remorseful, I would've turned myself in."

Davis' defense attorney Gary Jones argued that, while it was an unfortunate situation, the victim may bear some responsibility.

"It's not like he was at the corner and they crossed the street," Jones said. "We're talking about coming out in the middle of traffic."