SOUTHFIELD (WWJ) - A driver lost control of their SUV during the busy commute Wednesday morning and slammed into a building along Telegraph Road.

The crash happened just before 8 a.m. Wednesday along southbound US-24 just south of 10 Mile Road in Southfield. 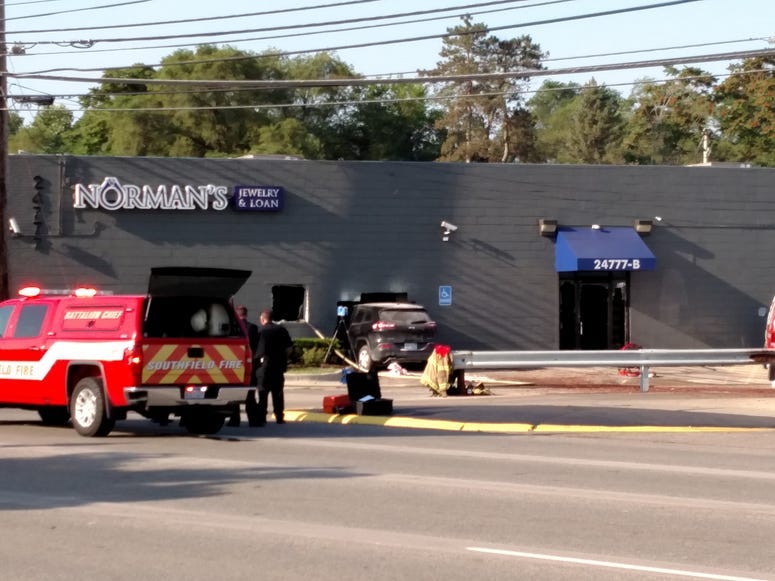 Police say the driver of a black Jeep Cherokee, a woman in her 30s, lost control of the vehicle, which went airborne after hitting the curb and crashed through the side of a brick building that houses Norman's Jewelry and Loan.

"The guardrail doesn't even look like it was touched. She went over that guardrail, that's how high she was. I don't know how that could have happened. To end up over the guardrail? That's astonishing," said Craig Balbes, who owns 800-4-Blinds in the same building.

Balbes said he and other workers were preparing orders for the day when they heard a crash on the other side of the building. When they made it to the scene, the SUV was halfway through the wall with the driver slumped over the steering wheel.

The workers quickly sprang into action, grabbed a fire extinguisher and doused the flames, which reignited twice before police arrive at the scene.

Crews were able to rescue the woman, who was taken to the hospital. She suffered some injuries and was listed stable condition.

Fire Captain Jason Deneau commended the workers for stepping in to help the woman.

"It's always an awesome thing when we see in emergency services when you have bystanders who are willing to jump in and assist," Deneau said. "Obviously we do not want them to put their selves, their lives in danger; we don't want them to get hurt in the process. We don't ever recommend that you put yourself in that type of situation, but it's nice to see when there are people willing to jump in and help."

An investigation is underway to determine what caused the woman to lose control of her vehicle.

Southbound Telegraph Road was closed at 10 Mile Road for several hours while police were investigating the crash scene, but has since reopened to traffic.

For the latest from the roads, stay with WWJ Newsradio 950 during Traffic and Weather on the 8s, 24-hours a day. >>LISTEN LIVE!