ROCHESTER HILLS, Mich. (WWJ) -- A Rochester Hills woman is facing possible charges after allegedly crashing into a garage and resisting arrest while she was drunk Sunday morning.

Oakland County Sheriff’s deputies received a call around 11:30 a.m. Sunday reporting that a vehicle had crashed into a home and the woman behind the wheel was unable to exit the vehicle.

When deputies arrived, they found multiple alcohol bottles inside the vehicle and the woman got out and sat on the front porch of the home.

As a paramedic attempted to render aid, the woman swung her fist at him, and deputies tried to place her under arrest. As they were trying to put her in handcuffs, the woman resisted by grabbing, kicking and attempting to punch deputies, according to the sheriff’s office.

The woman yelled profanities at deputies and defecated herself before being taken into custody, according to the sheriff's office.

Police say the woman took the car, which belonged to the woman’s mother’s husband, without permission.

The mother said her daughter was visiting her at her residence when she began drinking. Her mom said her daughter had gone to sleep and she left the home to go care for another family member, according to the sheriff’s office. 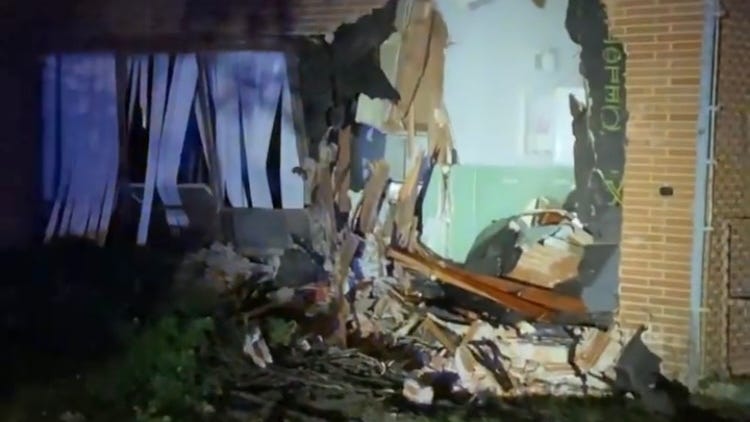 The mother told authorities her daughter is in a bad marriage and suffers from drug and alcohol abuse.

The woman was treated at a hospital for her injuries sustained during the incident.

Authorities conducted a blood draw to determine her blood alcohol content, and results are still pending.

A commercial contractor was called to the scene to secure the structure before the vehicle was removed.

Criminal charges against the woman are still pending.