PHILADELPHIA (KYW Newsradio) — With devastation and power outages all around him, a Lehigh Valley was able to safely escape Hurricane Ian in Florida. Now he tells his harrowing story.

"The sounds that I heard were like something that you would imagine in a Stephen King novel," said Bill Taverner of Easton, who was working remotely at his mother's condo in Fort Myers, Florida. "It was really scary."

At least 47 people in Florida were killed by what was at the time a Category 4 hurricane. More than a thousand were rescued from Florida's southwestern coast alone, according to officials. Florida deaths rise to 47 amid struggle to recover from Ian

Because the storm wasn't initially expected to hit the Island, Taverner said it wasn't until the hurricane was upon him that he felt the full force of Mother Nature. When Ian started pounding the fifth floor condo, he realized he was in trouble.

"Once I saw the gulf overtake the pool from the window, that's when I realized how bad it was," he told KYW. "The stairwell had its steel door on the main level twisted, like the top half of it folded the way that you might earmark a page of a book."

When the worst had passed, Taverner says a rescue worker knocked at his condo and told him of a meeting point where there would be evacuations. As he climbed over debris out of his building, Taverner noticed that all of the contents of the first floor condos had been washed away.

Taverner had to talk less than a mile with his luggage, where the beach had extended onto the road. "The streets had been cleared so much that it kind of looked like what a street might look like after a snowstorm where all the snow is pushed to the side," he recalled, "so all of the sand was pushed in very large heaps." 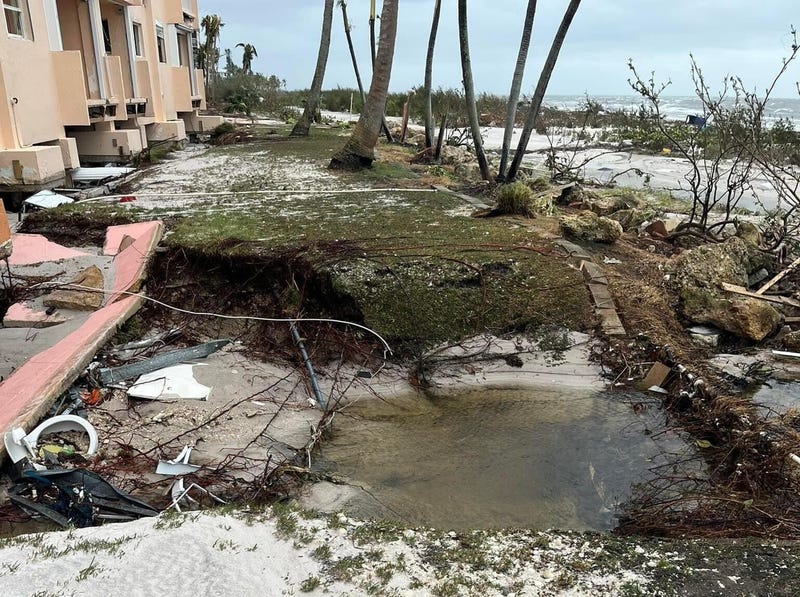 As he waited for a ride, he realized he didn't know who was coming to pick him up. "So much of this was on trust. You don't know who you got in the car with, but you just you assume the good nature of people," Taverner said. "The people who wound up taking us off the island were of all people Florida Fish and Wildlife."

Taverner was taken to a shelter on the mainland. From there, he was able to catch an Uber to Ft. Lauderdale where he booked a flight to Newark. He said it took him three days to get out. "I was told that the building that I was in was going to be condemned," he said. "Most of the buildings on the island, I think, are in a similar state."