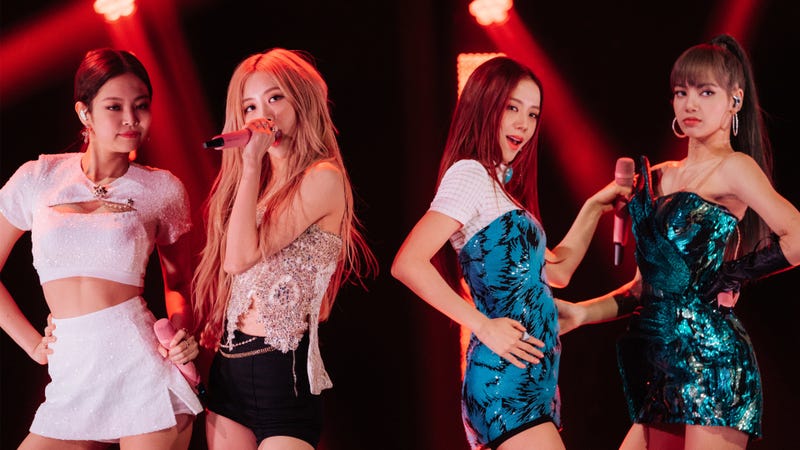 Blinks, the wait is officially over, BLACKPINK’s Born Pink era has officially begun. Starting with their first single in nearly two years, “Pink Venom.” The fiery and fierce anthemic track serves as the formal introduction to the K-pop group’s second studio album, set to arrive on September 16.

For all K-pop, all the time, listen to K-Bops now on Audacy

To celebrated their long-awaited return and brand new single BLACKPINK held a private online press conference in Seoul on Friday August 19 to divulge the song’s meaning, speak on their group’s evolved musical identity, and give a preview on their upcoming Born Pink album and tour.

Excited about being back together and releasing new music BLACKPINK spoke about how how “Pink Venom” represents them as a group.

“Since our album’s title is Born Pink, we wanted to relay our identity in the song as much as we could,” Jennie said. “Since ‘pink’ and ‘venom’ have contradicting images, we thought they were kind of reminiscent of us… we are named BLACKPINK and contradiction is our charm — we wanted to show that. It’s pink venom, a lovely poison, it’s words that most express us.”

Jennie then also added to that sentiment, by saying that the “essence” of BLACKPINK is “confidence.” Explaining that, “some worry that we might stray away from our identity, but we believe it’s the most distinct and clear way to represent us.”

Well, whatever the reason for why, we’re glad they did, because “Pink Venom” is a track to be reckoned with. The catchy tune starts with voices chanting the group’s name to the plucky strings of a sitar, before bursting into Jennie and Lisa’s fiery first verse. The entire bilingual track is backed by a sticky electronic beat mixed with sounds of Middle Eastern percussion and guitar.

As for the song’s music video, which has already amassed over 53 million views in 10 hours time, well it delivered everything we’ve come to love and expect from a BLACKPINK visual. From tightly choreographed dances against a series of colorful backdrops, solo scenes for each member to show off their unique style. And our favorite part, the endless array of incredible looks from futuristic and archival aesthetics, to street style, sleek, grungy, and more.

Watch the fatally fierce music video for “Pink Venom” below.