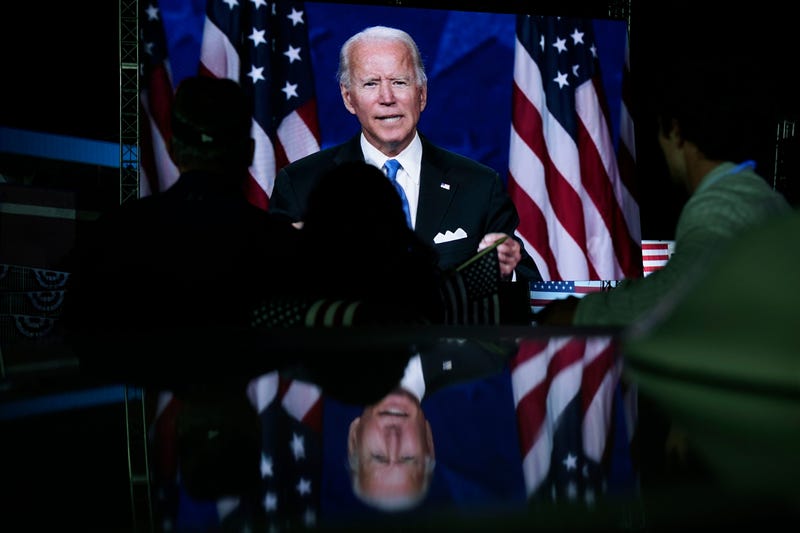 Photo credit FILE - In this Aug. 20, 2020, file photo supporters watch the program outside the venue where Democratic presidential candidate former Vice President Joe Biden is speaking, during the final day of the Democratic National Convention at the Chase Center in Wilmington, Del. Biden’s strength with Latino voters may be slipping, but he’s betting he can overcome any weakness with this critical group of voters by assembling a broader coalition of seniors, suburbanites and African Americans. (AP Photo/Carolyn Kaster, File)
By The Associated Press

MIAMI (AP) — Sen. Kamala Harris' motorcade raced past Colombian neighborhoods and made a quick stop for takeout in Doral — or “Doral-zuela” as it's known locally because of its large Venezuelan population — before speeding through the Cuban stronghold of Hialeah.

But during her first trip to Florida as Joe Biden's running mate last week, Harris did little to court this region's booming — and politically influential — Latino population. She instead focused on African American leaders waiting at a historically Black university in Miami Gardens.

“You truly are the future of our country,” Harris said into a megaphone after the motorcade pulled up to Florida Memorial University, where a marching band serenaded her ahead of an hourlong discussion with local Black leaders. "You are the ones who are going to inspire us and fight for the ideals of our country.”

In America's leading presidential battleground, there's mounting anxiety among Democrats that the Biden campaign's standing among Latinos is slipping, potentially giving President Donald Trump an opening in his reelection bid. That's fueling an urgent effort by Biden, Harris and their allies to shore up older voters, suburbanites and African Americans to make up for potential shortcomings elsewhere.

New York billionaire Mike Bloomberg committed over the weekend to spend at least $100 million in Florida to help the Democratic ticket. Biden is scheduled to make his first visit to the state as the Democratic nominee on Tuesday, where he will hold a roundtable with veterans in Tampa before attending a Hispanic Heritage Month event in Kissimmee.

If Biden reclaims the upper Midwest for Democrats, he won’t need Florida to capture the presidency. But Trump has virtually no path to reelection without it, which is why the state remains a top priority for Democrats.

Concerns about Biden's strength in Florida were driven in part by an NBC-Marist poll released last week, which found Latinos in the state about evenly divided between Biden and Trump. Hillary Clinton led Trump by a 59% to 36% margin among Latinos in the same poll in 2016.

Hispanic voters in Florida tend to be somewhat more Republican-leaning than Hispanic voters nationwide because of the state’s Cuban American population. Nationally, little public polling is available to measure the opinions of Latino voters this year and whether they differ from four years ago.

But allies closest to the Latino community said there are reasons to worry.

“Right now, I think the Biden campaign has work to do,” says Javier Fernandez, a Democrat running for the state Senate in Miami-Dade County, where 7 in 10 residents identify as Latino or Hispanic. “I don’t know that they’re super excited about Joe Biden.”

Sen. Bernie Sanders, who led among Latinos during the early stages of the Democratic primary, warned on Sunday that Biden should be "reaching out more aggressively to grassroots Latino voters.”

That would require a targeted — and expensive — effort that acknowledges the complexities of the Latino vote in Florida. A winning campaign likely requires varied outreach to Cuban Americans, Dominicans and Venezuelans in Miami along with first- and second-generation Central American immigrants around the state and displaced Puerto Ricans who settled in central Florida after Hurricane Maria.

The campaign has responded in part with ads featuring narrators with different accents to appeal to various backgrounds.

Some on Biden's team privately acknowledge he may not win over Latinos by the same margins as Clinton, although they are not conceding defeat. Senior strategist Cristobal Alex said the campaign has been pounding airwaves with Spanish-language advertising for months in addition to launching “Latino leadership councils” across the country.

“As we get closer to November you’re going to see an even greater amount of activity to turn out Latino voters," Alex said.

Ashley Allison, who leads Biden’s constituency engagement, said the campaign has already assembled more than 20 coalitions that include seniors, progressives, veterans and Native Americans, among others. Biden’s team has aggressively courted Black men and Black women in recent days as well, featuring virtual events with Harris and celebrities like actor Don Cheadle.

“We don’t have to focus on just one pathway, just one set of specific voters. We have the ability to expand the map and the coalition," said Becca Siegel, Biden’s chief analytics officer.