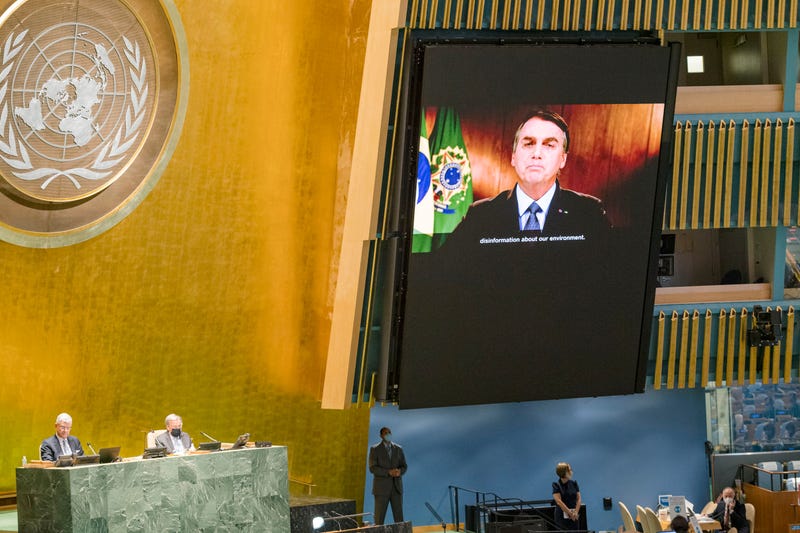 Photo credit In this photo provided by the United Nations, Jair Bolsonaro, president of Brazil, speaks in a pre-recorded message played during the 75th session of the United Nations General Assembly, Tuesday, Sept. 22, 2020, at U.N. Headquarters in New York. The U.N.'s first virtual meeting of world leaders started Tuesday with pre-recorded speeches from some of the planet's biggest powers, kept at home by the coronavirus pandemic that will likely be a dominant theme at their video gathering this year. (Rick Bajornas/UN via AP)
By The Associated Press

As the first speaker in the U.N. General Assembly's general debate, in keeping with tradition for the Brazilian leader, Bolsonaro said the South American nation’s agribusiness sector has succeeded in boosting agricultural exports to feed a growing global population, which has made it a target.

“We are victims of one of the most brutal disinformation campaigns about the Amazon and the Pantanal wetlands,” Bolsonaro said. "The Brazilian Amazon is well known to be very rich. That explains why international institutions support such campaigns based on ulterior interests, joined by self-serving and unpatriotic Brazilian associations, with the objective of harming the government and Brazil itself.”

Last week, a group of European countries — the Amsterdam Declarations Partnership, led by Germany — published a joint statement urging Brazil to take action in the Amazon. They said deforestation is making it “increasingly difficult” for businesses and investors in Brazil to fulfill their environmental, social and governance criteria.

“He (Bolsonaro) claimed that they were leading a campaign to discredit his government, yet it is his administration that has systematically eroded environmental legislation and not enforced penalties for environmental crime,” said Robert Muggah, co-founder of Igarapé Institute, a Rio de Janeiro-based think tank focused on public, digital and environmental security.

Bolsonaro came to office in 2019 promising to open more of the Amazon to development such as farming and mining. International concern, particularly after last year’s fires, has led investors to distance themselves from rising deforestation and pressure Bolsonaro’s government to take more action.

In Bolsonaro’s debut appearance at the assembly in 2019, he struck a defiant tone, railing against the media and socialism. He declared Brazilian sovereignty over the Amazon and denounced what he termed “radical environmentalism.″

“It is the same as last year: a mix of denial of reality and self-praise for promoting an environmental policy that does not exist,” said Rubens Ricupero, a Brazilian who was secretary-general of the U.N. Conference on Trade and Development for nearly a decade.

In May, Bolsonaro put the army in charge of protecting the rainforest. Two months later, he banned setting agricultural and forest fires for 120 days as the country entered the dry season. Brazilian law requires permits for fires to clear brush and open land for farming, ranching or logging, but the requirement is widely ignored.

Deforestation in Brazil’s Amazon region may have reached a 14-year high in the 12 months through July, according to preliminary data published last month by the country’s space agency. Final data will be released in coming months.

Fires spiraled out of control in Brazil’s Pantanal, the world’s largest tropical wetlands, with the number of blazes surpassing 16,000 so far in 2020 — considerably more than any full year on record, since 1998.

Bolsonaro also defended his government’s response to the COVID-19 pandemic in front of the U.N., highlighting the distribution of emergency cash for 65 million low-income Brazilians and financial support for small and micro businesses to keep them afloat amid a crushing economic downturn.