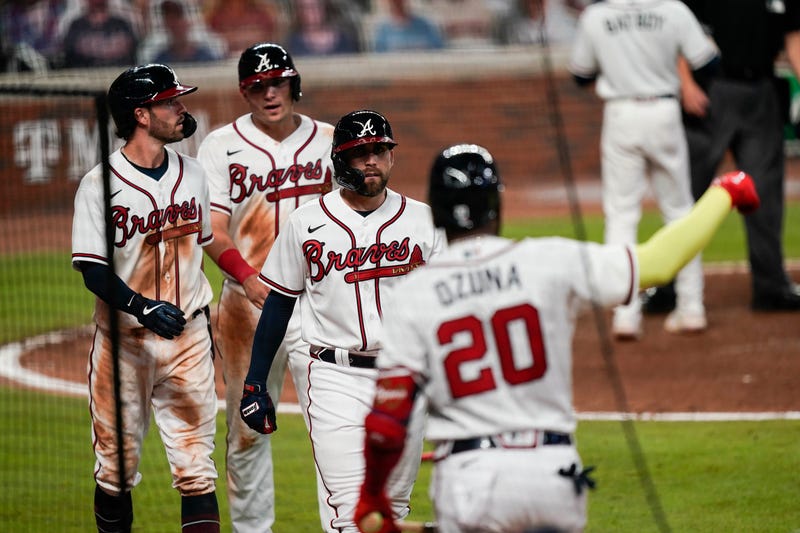 Photo credit Atlanta Braves' Dansby Swanson, left, Ender Inciarte, center, and Austin Riley return to the dugout after scoring in a double by Ronald Acuna Jr. during the sixth inning of a baseball game against the Miami Marlins on on Wednesday, Sept. 9, 2020, in Atlanta. (AP Photo/Brynn Anderson)
By The Associated Press

As it turned out, the new mix made National League history.

Adam Duvall drove in nine runs with three homers, including a grand slam, and the Braves obliterated their franchise scoring record and set the NL record in a 29-9 romp over the Miami Marlins on Wednesday night.

The Braves broke loose for 11 runs in the second and nearly matched the modern scoring mark since 1900, set by the Texas Rangers in a 30-3 rout of the Baltimore Orioles in 2007.

“Pretty amazing,” said Freddie Freeman, who drove in six runs with three hits, including a two-run homer. “Hard to put into words, really, when you look up and see 29 runs on the board.”

The Braves had 23 hits, including seven homers, to score the most runs in their history in Boston, Milwaukee and Atlanta. They topped the old record by six runs. Duvall's enormous night came exactly a week after he hit three home runs in a game at Boston.

A day after being shut out by the Marlins on four hits, the Braves erupted. Freeman said he woke up to a text from Snitker saying he'd be hitting second. Travis d’Arnaud had a three-run homer in the second as the new cleanup hitter.

“I would assume so,” Freeman said. “I think it would be very hard for him to change the lineup after scoring 29 runs.”

The big second inning knocked Pablo López out of the game. Duvall hit another homer, his 12th, in a six-run fifth and added the slam in the seventh off Josh Smith.

“I’ve known that homers come in bunches but something like that is pretty special,” Duvall said. “I’m going to enjoy this one tonight.”

Three runs scored on a sixth-inning double by Ronald Acuña Jr. that gave Atlanta a 25-8 lead and the franchise record for runs in a game.

On Sept. 2, 1957, Hank Aaron and the Milwaukee Braves, the eventual World Series champions, hammered the Chicago Cubs 23-10 at Wrigley Field. That franchise record for runs in a game stood for 63 years. The old Atlanta record was 20 runs, most recently against the Marlins on Oct. 5, 2001.

Ozzie Albies, playing in his first game since Aug. 4 in his return from a wrist injury, had three hits, including a homer. Acuña also hit a three-run homer and drove in five runs.

“He was third on the team,” Freeman said with a laugh.

Freeman's homer in the third was his 1,500th career hit. Dansby Swanson, who had three hits, Austin Riley and Duvall each scored five runs.

Atlanta's offensive outburst came one day after being shut out 8-0 by Miami for the Braves' second straight loss in the series.

“He just seemed to be out of sync early in that game with the walks and wasn’t getting anything really over,” Marlins manager Don Mattingly said.

Despite the loss, the Marlins took two of three for their first series win in Atlanta since Sept. 12-14, 2016.

Despite the overwhelming run support, Atlanta left-hander Tommy Milone didn't get the win. He allowed eight hits and eight runs in 3 1/3 innings.

Lewis Brinson hit a three-run homer for Miami. Jazz Chisholm, who was hitting .063 through six games, had a run-scoring triple and his first career homer.

Marlins: INF Jon Berti (cut finger) was held out for the second straight day. Mattingly said he wanted to give Berti another day even though Berti was available if needed in an emergency on Tuesday night.

Braves: Albies took swings against LHP Cole Hamels (triceps tendinitis) on Sunday and was impressed. “He looked really good,” Albies said. “He even told me when the cutter was coming and I still missed it.” Hamels will pitch in a simulated game on Friday and could make his 2020 debut next week. ... IF Johan Camargo was optioned to the alternate training site.

Duvall became the first player in franchise with more than one three-homer game — and he accomplished the feat twice in eight days. He also hit three homers on Sept. 2 at Boston.