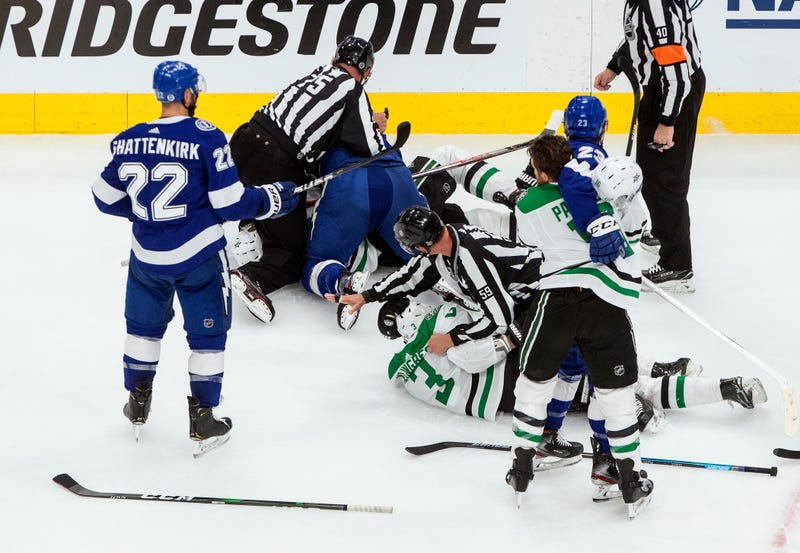 EDMONTON, Alberta (AP) — Pat Maroon shot a puck into the Dallas bench, nailing an opponent in the face. Victor Hedman tripped Corey Perry before a faceoff. Perry put Tampa Bay's Cedric Paquette into a headlock before getting flipped over.

The dislike is building quickly for the Stars and Lightning in this Stanley Cup Final, which is knotted at 1-1 going into Wednesday night's game. While nastiness typically develops in a lot of series this deep in the playoffs, it's happening even earlier in this one because players have grown cranky after eight weeks in the NHL bubble.

They are taking it out on the ice.

The championship will ultimately be decided by which team can dictate its game to the other in what has become a best three out of five series. Those extra pushes, shoves and facewashes are part of it — and they only ratchet up the intensity, even without fans to cheer or boo it all.

“It seems like in this setting with no fans, it’s even more competitive out there with just you and the other team,” Dallas forward Andrew Cogliano said. “Both teams are going to fight for every inch. As the series goes on, it’s just going to get more competitive.”

It's competitive and chippy after the teams split the first two games and combined for 50 penalty minutes. Fourteen of those belong to Maroon, who got a 10-minute misconduct for flipping a puck into the bench and two minutes for roughing it up with Jamie Oleksiak in Game 1, then another two in Game 2 for running Stars goaltender Anton Khudobin.

“You know what happened,” Maroon said when asked about the puck incident. Stars veteran Joe Pavelski wasn't thrilled the puck hit rookie Joel Kiviranta in the face, but said the referees handled it.

“That’s all you can do,” Pavelski said. “It doesn’t take us off our game.”