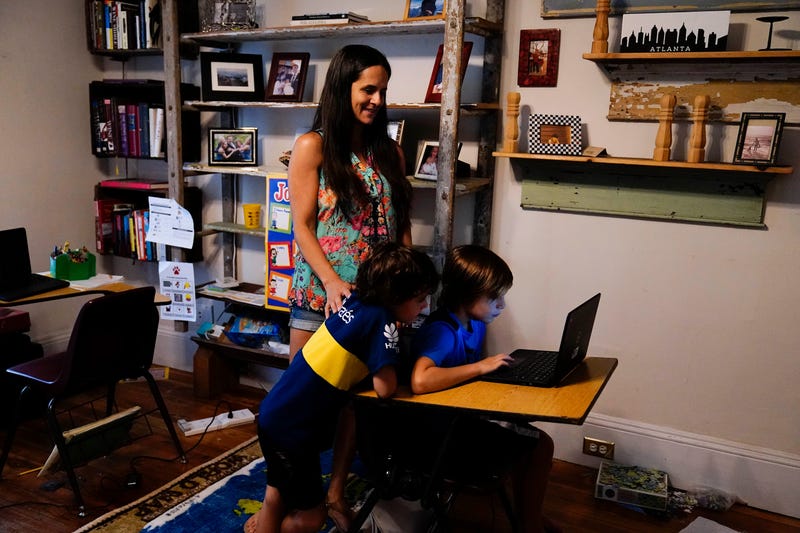 Photo credit Anna Hamilton, 43, center, poses for a photograph with her sons, Henry, 6, left, and Adrian, 7, right, in their home on Monday, Aug. 24, 2020, in Decatur, Ga. Hamilton is taking leave from her job at a small investment firm where she has worked for 12 years so she can guide her children through remote schooling. Looking back, she sees how childcare responsibilities, doctor visits, school pick-ups, lining up babysitters, often fell on her as the parent with the more flexible job. (AP Photo/Brynn Anderson)
By The Associated Press

NEW YORK (AP) — Angela Wynn had just launched her own project management business, hitting a career stride after years of struggle that began with earning an undergraduate degree as a single mother.

Then the coronavirus pandemic hit, forcing many schools to shift online. The now-married mother of five saw little choice but to give up her newly minted business to help three of her children cope with remote learning while her husband, the primary breadwinner, kept his job at a senior living center.

“To see all that come to fruition, I did it, but now it’s gone,” said Wynn, who has always been the main caretaker for her children, ages 1, 5, 11, 12 and 18. “But my priority is my kids and their education is everything.”

Wynn’s story is becoming distressingly common. Research is increasingly pointing to a retreat of working mothers from the U.S. labor force as the pandemic leaves parents with few child care options and the added burden of navigating distance learning.

The trend threatens the financial stability of families in the near-term. In the long-term, the crisis could stall — if not reverse — decades of hard-fought gains by working women who are still far from achieving labor force parity with men.

Thousands of school districts are starting the school year with remote instruction, including most of the largest ones. At least half the country's child care providers are closed and may not survive the crisis without financial help to cope with implementing safety standards and reduced enrollment. Negotiations for a bailout of the industry have stalled in Congress.

Overall, the drop translates into 1.3 million women exiting the labor force since February.

“We think this reflects the growing child care crisis,” BNP Paribas economists Daniel Ahn and Steven Weinberg wrote in recent report. “It is hard to see this abating soon, and if anything could become worse as we move into fall.”

Few families can afford for mothers not to work indefinitely: Mothers are now are the equal, primary, or sole earners in 40% of U.S. families, up from 11% in 1960, according to federal labor figures. Women also comprise nearly half the U.S. labor force, making their inability to work a significant drag on the economy and hindering any recovery from the pandemic's impact.

In Wynn's case, she is working a part-time j